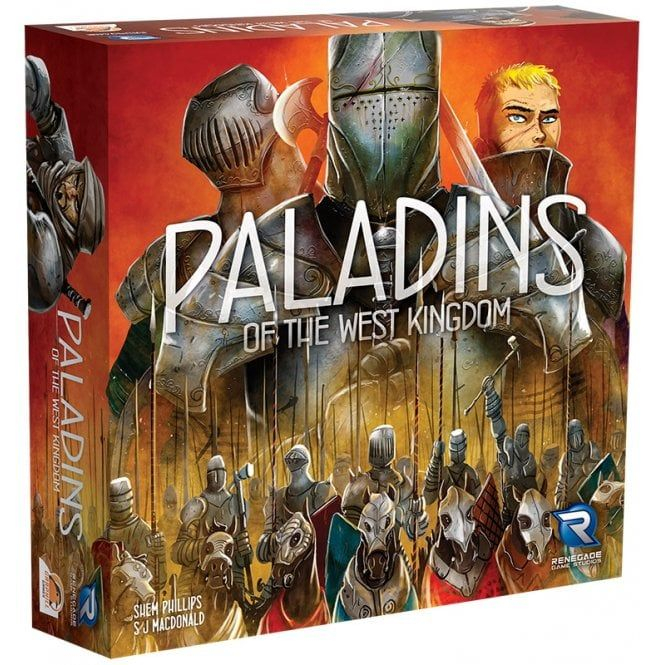 Paladins of the West Kingdom Board Game £33.29 @ Magic Madhouse

Part of the west kingdom trilogy from Garphill games and great.

Paladins of the West Kingdom is set at a turbulent time of West Francia's story, circa 900 AD. Despite recent efforts to develop the city, outlying townships are still under threat from outsiders.

Saracens scout the borders, while Vikings plunder wealth and livestock. Even the Byzantines from the east have shown their darker side.

As noble men and women, players must gather workers from the city to defend against enemies, build fortifications and spread faith throughout the land. Fortunately you are not alone.

In his great wisdom, the King has sent his finest knights to help aid in our efforts. So ready the horses and sharpen the swords. The Paladins are approaching.

Unique gameplay experience with interesting and tough decisions to make each round
12 unique Paladins and more than 60 Townsfolk and Outsider Cards provide a huge amount of depth and replayability
Multiple paths to victory, thanks to the Suspicion system, Attribute Tracks and wide array of potential Townsfolk and Outsider combinations
Just the right amount of player interaction, with no take-that mechanisms
Intuitive and easy to use solo play mode
Over 250 cards and 240 wooden tokens

Aim of the Game

The aim of Paladins of the West Kingdom is to be the player with the most victory points (VP) at game's end. Points are gained by building outposts and fortifications, commissioning monks and confronting outsiders.

Each round, players will enlist the help of a specific Paladin and gather workers to carry out tasks. As the game progresses, players will slowly increase their faith, strength and influence.

Not only will these affect their final score, but they will also determine the significance of their actions. The game is concluded at the end of the seventh round.
PostTweetShare Share with WhatsApp Share with Messenger
Community Updates
Magic Madhouse DealsMagic Madhouse voucher codes
New Comment SubscribeSave for later
10 Comments
14th Mar
I have Architects and just wonder if I need this too. I like Architects as it plays one player nicely too. Good price. And for all us HDUK students you can get 5%off too with student beans.
14th Mar

From what I understand, they all play differently (architects, paladins and viscount) although haven't played paladins (or viscount). Most people say Paladins is better, might be worth a watch of a playthrough to see what you think?
Good call with student beans too
14th Mar

I have both and played both. They are different but if you aren’t a massive board gamer (I.e only own 4-5 games that are different enough), I’d pass on this. I prefer architects to this as it has less player interaction. They have a new game coming out which might be worth checking out instead
14th Mar

Viscounts of the West Kingdom, its currently on KS. Mechanics are quite a bit different and it looks really nice.
14th Mar
Is this as good as The Cones Of Dunshire?
15th Mar

Wish you hadn't said that! Now tempted to buy the bundle of all 3....

I was too... Managed to resist, for now. I think Viscounts looks the best of all three to be honest and that's saying something.
15th Mar
Thanks
15th Mar
I apologise if this is an odd question....

But is this anything like hero quest from the 90s??
15th Mar

No it isn't really. Dungeon Quest is very like it though and probably better. Or imperial assault which is a bit heroquest but in star wars guise.
Or I suppose Gloomhaven but that's a serious time investment.