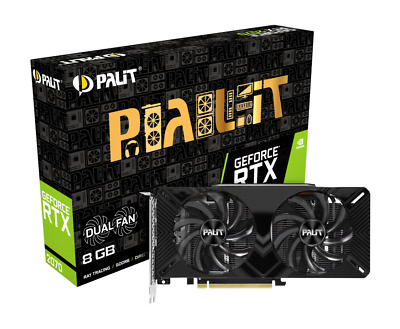 The powerful new GeForce RTX™ 2070 takes advantage of the cutting-edge NVIDIA Turing architecture to immerse you in incredible realism and performance in the latest games. The future of gaming starts here.

GeForce RTX™ graphics cards are powered by the Turing GPU architecture and the all-new RTX platform. This gives you up to 6X the performance of previous-generation graphics cards and brings the power of real-time ray tracing and AI to games.

GeForce RTX™ features a dedicated hardware encoder that unlocks the ability to game and stream simultaneously with superior quality. RTX graphics cards are optimized for your favorite streaming apps, like Open Broadcaster Software (OBS), to provide maximum performance for your live stream.

Get the highest levels of performance, and the smoothest experience possible, from the moment you start playing.

Capture and create in-game screenshots that can be viewed in 360 degrees. Compose your screenshots from any position, adjust them with post-process filters, capture 4K HDR images in high-fidelity formats, and share them in 360 degrees using your mobile phone, PC, or VR headset.

DrMOS, originally only available for high-end server CPUs, is now available in all its glory in the next generation of Palit graphics cards. DrMOS offers high current circuits, low noise operation, and effective reduction of heat generating.

A Dual Fan design offers double the cooling performance, and combined with the 9CM-9CM Smart Fans, heat is effectively drawn away from hot spots.

The large copper base design directly adhered with GPU and heatpipes, can dissipate the heat efficiently from the GPU.

Palit enhances the ThunderMaster – the brand-new utility to tap into this powerful GeForce RTX™ 20 series card.

I have lost track of the number of times I have read comments like this over the years.
Because of people like you, I am still rocking a GeForce 256.
Edited by: "Uranus" 4th Feb
27 Comments
4th Feb
Is this comparable to a 5700 XT or is this even better?
4th Feb

an amd person will say the xt nails the 2070 and indeed there correct but the 2070 offers better reliability cos of the drivers, meanwhile amd nail it on price point, but the gap is closing, ur best bet is do ur own research as i dont get into the 2070/xt and u then u got the ongoing development of the RTX,.
Edited by: "sarden84" 4th Feb
4th Feb
You do not want to buy any new graphic cards yet. if you can make do with what you have wait until summer lots of new cards coming out this year with much better performance for similar money for all sizes of wallets. The old graphic cards like the one posted above are now expensive in relation to what you will be able to get later this year.
Edited by: "shamus21" 4th Feb
4th Feb
And ignore anything on GPU.benchmark. unreliable at best.
Waiting is the best at the minute.
Edited by: "Eldi" 4th Feb
4th Feb
Strong rumours that the 3000 series will provide the biggest bump in graphics cards we've seen in a long time. 50% bump in power with 50% of the power draw. AMD will be showing off their "Big Navi" cards soon which should put some price pressure on the 2070's and 2080's if the 3000s aren't around at that point.
4th Feb

I mean, that's always the case, in literally every industry, and every technology - you wait a little bit and get more for your money.

At some point you just have to bite the bullet and buy it at the price it's at. If no one buys the prices don't go down.
4th Feb

I have lost track of the number of times I have read comments like this over the years.
Because of people like you, I am still rocking a GeForce 256.
Edited by: "Uranus" 4th Feb
4th Feb

Like others have said, unless you need an update you would be better to wait for Ampere and Big Navi.
Edited by: "Gormond" 4th Feb
4th Feb

you're missing the point, to use your example: once nvidia move to 7nm, someone is going to say wait until they switch to [5nm] - it doesn't add anything to the discussion, and if everyone waits then nvidia don't have an incentive to move to the next gen. someone has to buy the current gen in order for the next gen to come to market, and those who wait will always be waiting for the next best thing. As @Uranus says, you would be stuck on a card from 20 years ago with that attitude
4th Feb

Yes but these advances don't happen every year, usually it takes about 3 years for process node changes of this magnitude (The last large leaps were in 2013 and 2016). Considering new cards are due this year if you wait it will likely be 2023 before we see such a big performance gain again.

I'm not saying that you should always wait but when Nvidia are expected to announce their new cards at the end of march (GTC) with massive performance gains (And Big Navi due too which is the first time we have seen AMD compete at the high end in years) I don't think it is a foolish suggestion.
Edited by: "Gormond" 4th Feb
4th Feb

ok that's fair enough from a timescale perspective, but those cards will cost more than what we're seeing here.
4th Feb

DW there'll be a good reason for you to upgrade in another decade.
4th Feb

It depends, with current drivers the Aib Nitro XT tested at 3% slower than a 2070 super

Most aibs perform at this level now, so they're definitely a good chunk faster than the rtx 2070.

The rtx 2070 is supposedly more reliable, but I'd like to see figures on this - in my experience nvidia cards are more plug and play though. I have an XT and its worked perfectly, my first amd card.

Definitely discount ray tracing here, the 2070 isn't powerful enough to pull it off in modern games comfortably. If you're new to PCs and don't want to tinker, then maybe the rtx is the better buy. If you like tech, get an XT, it's better in every way, and the new consoles will be navi based so it'll only get better.
4th Feb
Buying at the best time means waiting.

This is not the best time. The best time to buy is generally near the start of new cards releasing. This is because you get a brand new card which will be relevant for the longest possible time. Or you're buying an older card that has been price cut because of the new cards.

We have also entered a year where Nvidia are going to deliver a large jump in performance over their previous designs. One we haven't seen since 2016 with Pascal and likely won't see again for another 2-3 years. That is just the cherry on top of why people should wait.
4th Feb

I remember that card well it was impressive at the time of release.
4th Feb
About that performance jump you guys are expecting, it may not be as impressive, as you think. They said about 50% in plus, but explained they summarize the GPU power, which is expected to be 25%, and Ray-Traycing power, which is about to be another 25%. Sounds tricky to me and not as attractive, as initially ...
2070 keep showing up at good prices, but I'm surprised that the 2070 Super version is so much more expensive. I guess, it's the market's demand, fuelling the prices fly high.
I started thinking about lowering my personal requirements to regular 2070. AMD is not an option for me, with the current generations of their cards.
4th Feb
Things that are OK to buy right now are Ryzen 3600's, DDR4 may go up in price this year although it's still good value, SSD's are great value compared to hard drives, regardless of whether they drop in price later.

Ray tracing isn't a must have right now
(Some) people have driver issues with 5700's, so this may be worth the premium over AMD

This looks great for 1440P gaming,
there have been a flood of GPUs this year, I'd rather wait for the big navi to release and hope to get one of these for £270

most people are on really old GPUs, so don't feel you have to have the latest one just because reviewers test these at ultra-turbo-4K-ray-zoom quality levels
4th Feb

The raw performance jump will be at least 25 percent. As a minimum. Reality is it'll be more.

If Nvidia took Turing, shrunk it to 7nm and only upped the clock speeds due to the process they would get that much performance enhancement for doing absolutely nothing to the design. If you want an example, then look at Radeon VII. It's just a Vega 64 shrunken down, with LESS compute units (60 v 64) as some were disabled for better yields. It's still 25 percent faster because of the clocks and memory!

Nvidia aren't just straight shrinking however. They will evolve the architecture as well and enhance it. Which means it's really not a stretch to see much more than 30 percent increase in overall performance. I would throw it out there that it'll be a 40+ increase for the upper tier cards, like going from a GTX970 to a GTX1070.

The key really will be where the pricing falls, because AMD need Big Navi to just keep up with whatever Nvidia are going to toss out as the midrange. A 5700XT is going to be like an RX580 in terms of where it is on the GPU ladder by the end of this year. Bang in the midrange, at best.
4th Feb
So you admit, it is safe to expect 25%. Rest of the lecture is irrelevant.
Now read previous comments - people are really expecting it to have 50% raw perf. improvement. That's not gonna happen and 25-30% isn't a huge value. I don't see a reason why they would make it more, while competition is so behind. They keep staying more pricey for the same reason.

I have a PC without a card, because my old card doesn't fit into chassis (OEM build). Quite modern, very strong, just without a VGA. Annoys me that waiting, but I feel like a sucker every time I want to go for a 2070Super, when I realise they really are overpriced now. I will eventually get it, I'm pretty sure, but it's not going to taste like victory ...
4th Feb

The raw performance jump will be at least 25 percent. As a minimum.

This, first real update from nVidia in an age. It'll be a solid jump but a pricey one
4th Feb

25 percent is the rock bottom minimum with no effort made by Nvidia, as emphasised. Which is why the rest of the post was NOT irrelevant. If you had actually read the rest it outlines why it'll actually be more than 30 percent.

The last example of this kind of manufacturing process leap could be the 14nm RX580 versus the 7nm 5700XT. Both dies are pretty close in physical size, but 5700XT is easily over 40 percent faster. You might not think it possible to have such a large jump but then you'll get a nice surprise then won't you?
5th Feb
They said 25% and you can predict whatever you only want.
I predict they're gonna be pricey. You know why? Because competition sucks and Nvidias sell fantastic. 2070 Super isn't gonna go down on price right away - it will take time. So, the thing is, every time one wants to buy a card, another one says it's worth waiting... I honestly don't know if it really is worth waiting that much.
5th Feb

where are my DirectX 7.0 people at?