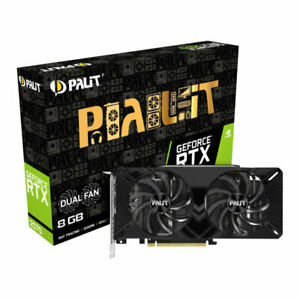 GeForce RTX™ graphics cards are powered by the Turing GPU architecture and the all-new RTX platform. This gives you up to 6X the performance of previous-generation graphics cards and brings the power of real-time ray tracing and AI to games.

GeForce RTX™ features a dedicated hardware encoder that unlocks the ability to game and stream simultaneously with superior quality. RTX graphics cards are optimized for your favorite streaming apps, like Open Broadcaster Software (OBS), to provide maximum performance for your live stream.

Get the highest levels of performance, and the smoothest experience possible, from the moment you start playing.

Capture and create in-game screenshots that can be viewed in 360 degrees. Compose your screenshots from any position, adjust them with post-process filters, capture 4K HDR images in high-fidelity formats, and share them in 360 degrees using your mobile phone, PC, or VR headset.

DrMOS, originally only available for high-end server CPUs, is now available in all its glory in the next generation of Palit graphics cards. DrMOS offers high current circuits, low noise operation, and effective reduction of heat generating.

A Dual Fan design offers double the cooling performance, and combined with the 9CM-9CM Smart Fans, heat is effectively drawn away from hot spots.
EBay DealsEBay discount code
If you click through or buy, retailers may pay hotukdeals some money, but this never affects which deals get posted. Find more info in our FAQs and About Us page.
New Comment Subscribe Save for later
Top comments
21st Nov 2019
I'll tell you a secret...there is no point to upgrade to this if you have the previous generation...it is just too good...
79 Comments
21st Nov 2019
Good price finally for the 2070, must be the last remaining stock. Don't think this cooler does idle zero fan speed though but otherwise a decent brand of card.
21st Nov 2019
How does this compare to the GeForce RTX 2060 Super?
21st Nov 2019

How does this compare to the GeForce RTX 2060 Super?

I bought a 2060 super at this price so I'm tempted to return and get this but in all honesty, from what I remember of last year's BF, PC hardware rarely gets bigger discounts than this. I'm happy to be proved wrong!
21st Nov 2019
oh wow 8% off
21st Nov 2019

Graphics Cards have been frustrating for a good few years now. Mid range cards are at the price point that used to be reserved for the top end and each new generation offers only a modest performance increase.

Here's hoping Intel's graphics cards (which are aiming at the mid range) shake the market up when they launch mid next year.
21st Nov 2019

I’ve been a PC gamer since I was five years old, I’m now 32. Every couple of years there’s a rumour about an upcoming Intel GPU they’ll be competitive with ATI/AMD and nVIDIA for years now. Nothing never comes of it.

Intel announced some time ago they're entering the discrete GPU market on 2020, so this time it isn't rumours, they're legit releasing GPUs in 2020.
21st Nov 2019

At best we'll see something by June next year but rumour has it they're focusing on professional grade cards first?
21st Nov 2019

Basically, Intel took on AMD's chief architect (and the guy responsible for some of their most recent GPU designs), and are now pitching to release decent discrete GPUs next year. They're going to be good - there'd be literally no point in them releasing anything that doesn't at least outstrip their iGPUs, so we're probably looking at Rx 550 or nVid 1050-levels of performance and upwards. Intel have never been a company to compete on price though, so things really do look promising.
21st Nov 2019
Cracking deal.

If you've got the same budget, pay a little more for a Pulse or Red dragon 5700xt.
I stuck with Nvidia because I use the steamlink and nvidia's got a really good encoding for streaming.
The XT is definitely superior for raw power though.
21st Nov 2019
5700xt no doubt for the same price (slightly faster overall, between this and 2070 super I'd say, maybe closer to the super), and in some games that utilize well next gen APIs like Forza the 5700xt gets close to the 2080ti lol, 5700xt will age away better, like usual, specially when next gen consoles with RDNA and Zen come out next year.
21st Nov 2019

Not really got a budget tbh, been thinking of upgrading my i5 4460 and gtx 960 with a whole new build as I don’t think my mother board nor my current 8gb would support just a CPU and GPU upgrade but haven’t really set a budget, I guess price/performance is key for me?
21st Nov 2019
I got really exited for a second, then I realised this was the non super. Probably a good deal though. HEAT.
21st Nov 2019

If upgrade from 1060 3gb ram will i need to change processor too?

Depends what processor and what resolution you're gaming at.
21st Nov 2019

I would consider getting a 1070/980ti used if you can. And see if your motherboard supports an i7, all these things can be grabbed fairly cheaply these days - for less than a new rig!
21st Nov 2019

Depends what processor and what resolution you're gaming at.

Can't remember what processor I have atm. At work and can't check. What would be ideal for this graphics card?
21st Nov 2019

Do you know if the geforce rtx wording is supposed to be lit up when installed? I cant find any pictures of this card installed so dont know if mine is faulty or not.