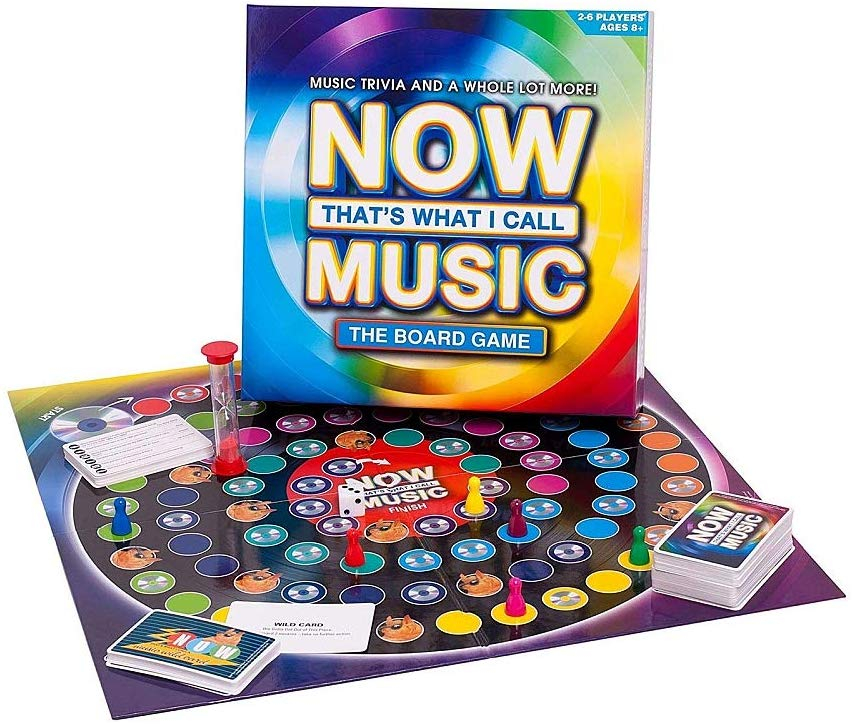 Do you love music? Are you a fan of the NOW music series? NOW That’s What I Call Music is one of the most successful compilation album series of all time and music fans can now test their musical knowledge with this fun-packed trivia board game. There’s Music Trivia and a whole lot more! From New Romantics and Britpop to House and Rap, the chart-topping NOW music series has become the soundtrack to our lives so relive the last few decades of great music in this fun-packed, fast-moving board game. There are questions from the 80’s, 90’s and 21st Century as well as covers to sing and song titles to be mimed, promising hours of fun and entertainment for the whole family. The aim of the game is to answer the questions and pip your opponents to the centre of the board. Throw a 1 and you’ll be answering a question on 80’s music, a 2 and it will be music trivia from the 90’s and a three will have you wracking your brains on tunes from the 21st century. Throw a four and it is Complete the Title round but a five will see you miming a song title such as Park life, Rolling in the Deep and Pump Up the Jam, for your fellow players to name. A six on the dice though will have you describing, humming, clapping or even whistling songs such as Imagine, Mad World and the Birdy Song for opponents to guess! This fantastic music trivia board game is ideal for 2 – 6 players and suitable for ages 8 years and over.

- Fun-packed Music Trivia board game for the whole family
- NOW That’s What I Call Music is one of the most successful compilation album series of all time
- Music Trivia questions from the 80’s, 90’s and 21st Century
- There are also covers to be sung and song titles to be mimed
- Ideal for 2 – 6 players and suitable for ages 8 years and over

not appropriate for children under the age of 3

- 1 x Playing Board
- 6 Coloured Playing Pieces
- 1 Die
- 125 Now Music Cards
- 25 Wild Cards
- 30 Second Timer
- Rules
PostTweetShare Share with WhatsApp Share with Messenger
Community Updates
Amazon DealsAmazon discount code
New Comment Subscribe Save for later
4 Comments
16th Feb
Why's this in the LEGO section, from what im seeing it has nothing to do with LEGO
16th Feb
Thanks- will be getting one of these!
Edited by: "jo-bb" 16th Feb
16th Feb

Very odd
17th Feb
Good quiz game for those who like their music. The mechanics are a bit unnecessary but do introduce a bit of randomness and luck without being annoying.

The 80s questions are worth less points so can act as a bit of an equaliser if playing across the generations. I don't think the 'current' questions are particularly current, unless it has been updated.