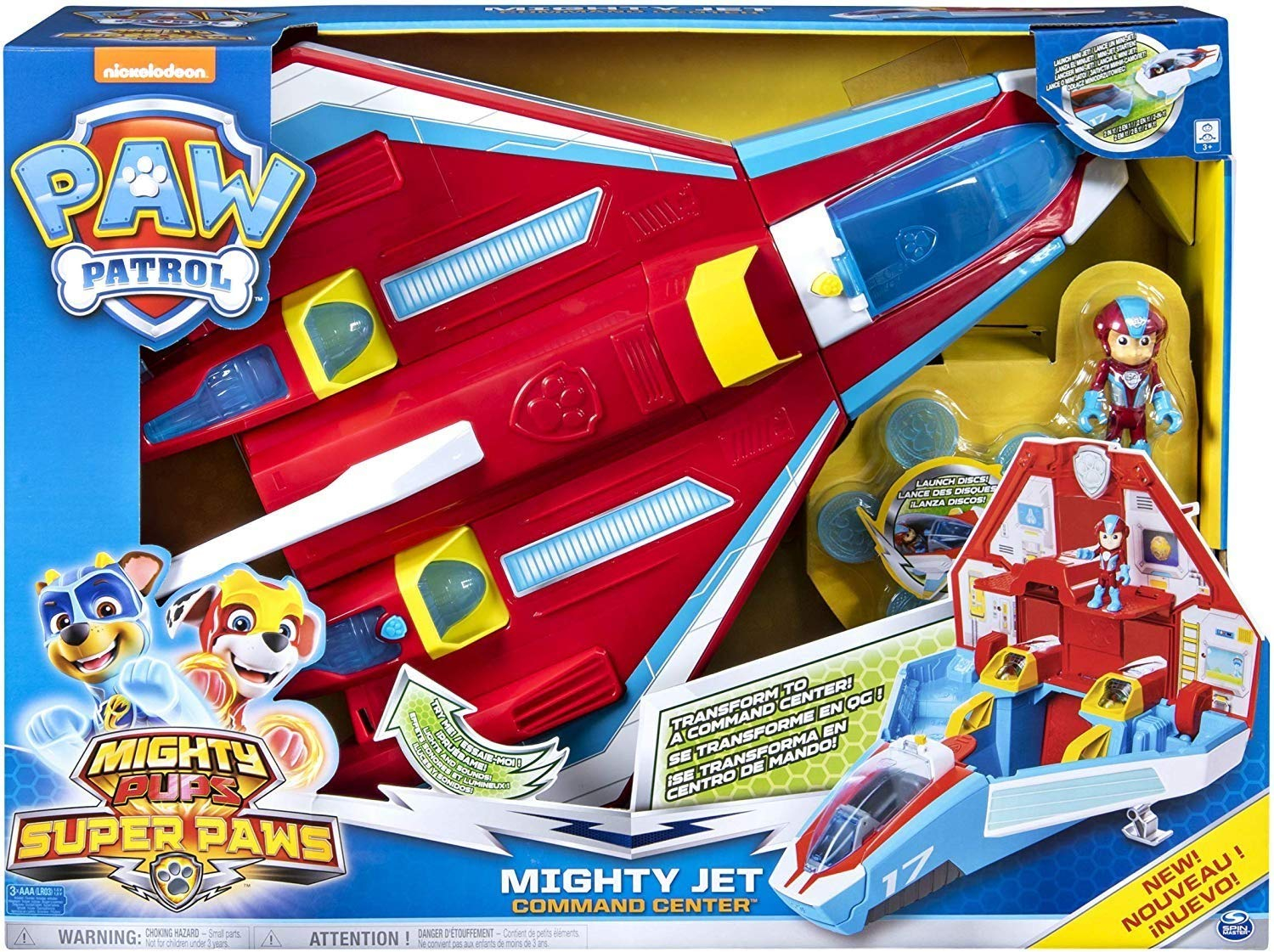 Amazon did have this as "Arriving before Christmas" and updated the message to "Arrives after Christmas" when I last looked.

Please check your order history for an estimated arrival date as many of you will want this for Xmas day no doubt.

Mighty missions call for a mighty team vehicle: Introducing the Paw Patrol Super Paws Mighty Jet Command Centre. This 2-in-1 deluxe team vehicle transforms from a jet into a mobile command centre for the Paw Patrol. On land, lift the handle on the jet to switch into mobile command headquarters, with room for all of the Mighty Pups (figures sold separately) and one deluxe Mighty vehicle (sold separately), the pups can get ready for adventures inside. When it’s time for a rescue mission, pop the included exclusive Mighty ryder figure into the cockpit and load the disc launcher. Close the headquarters back into Mighty Jet and soar through the sky! Push the button on the front of the jet to launch the discs and take down obstacles, with real lights and sounds and realistic details, the Paw Patrol’s Mighty Jet is ready for anything, rescue in a tight space. Ryder is on the case, open the jet back into the command centre and push the button to eject ryder and his mini jet continue to launch discs and help to save the day. For more mighty land rescues, load a pup into the vehicle and release it from the cargo pit in the back of the jet. Take to the skies with the Paw Patrol and their Mighty Jet Command Centre.

- 2-IN-1 TRANSFORMING JET: Switch from deluxe jet into mobile command headquarters! Lift the handle to open the jet into the command centre, with room for all of the pups and one Deluxe Mighty Vehicle (each sold separately)! Easily fold back up into the Mighty Jet.
- MINI JET AND EXCLUSIVE RYDER FIGURE: For mobile rescues, place the exclusive Mighty Ryder figure into the cockpit. Push the button to launch Ryder and his mini jet from the command centre!
- DISC LAUNCHER AND REAL LIGHTS AND SOUNDS: Load the disc launcher with the 5 included discs, and push the button to release them in the Mighty Jet or in Ryder’s mini jet! Press the button on the Mighty Jet’s engine to activate real lights and sounds!
- The PAW Patrol Mighty Pups Super PAWs Mighty Jet Command Centre makes a great gift for kids aged 3 years and over. Requires 3 AAA batteries (included). Bring the action and excitement of the hit TV show home with the Mighty Jet Command Centre!
PostTweetShare Share with WhatsApp Share with Messenger
Community Updates
Amazon DealsAmazon discount code
If you click through or buy, retailers may pay hotukdeals some money, but this never affects which deals get posted. Find more info in our FAQs and About Us page.
New Comment Subscribe Save for later
8 Comments
22nd Dec 2019
Amazing deal, I usually see it for around £40. Bought, thank you.
22nd Dec 2019
Hot hot hot! Absolute mega price for this!
22nd Dec 2019
Absolute bargain. Another present for my son. Thank you!
22nd Dec 2019
Bargain missed it
22nd Dec 2019
Bought thanks 🏻
22nd Dec 2019

Thanks got it ! Xx

Nice one! Hopefully you`ll get in time for the big day