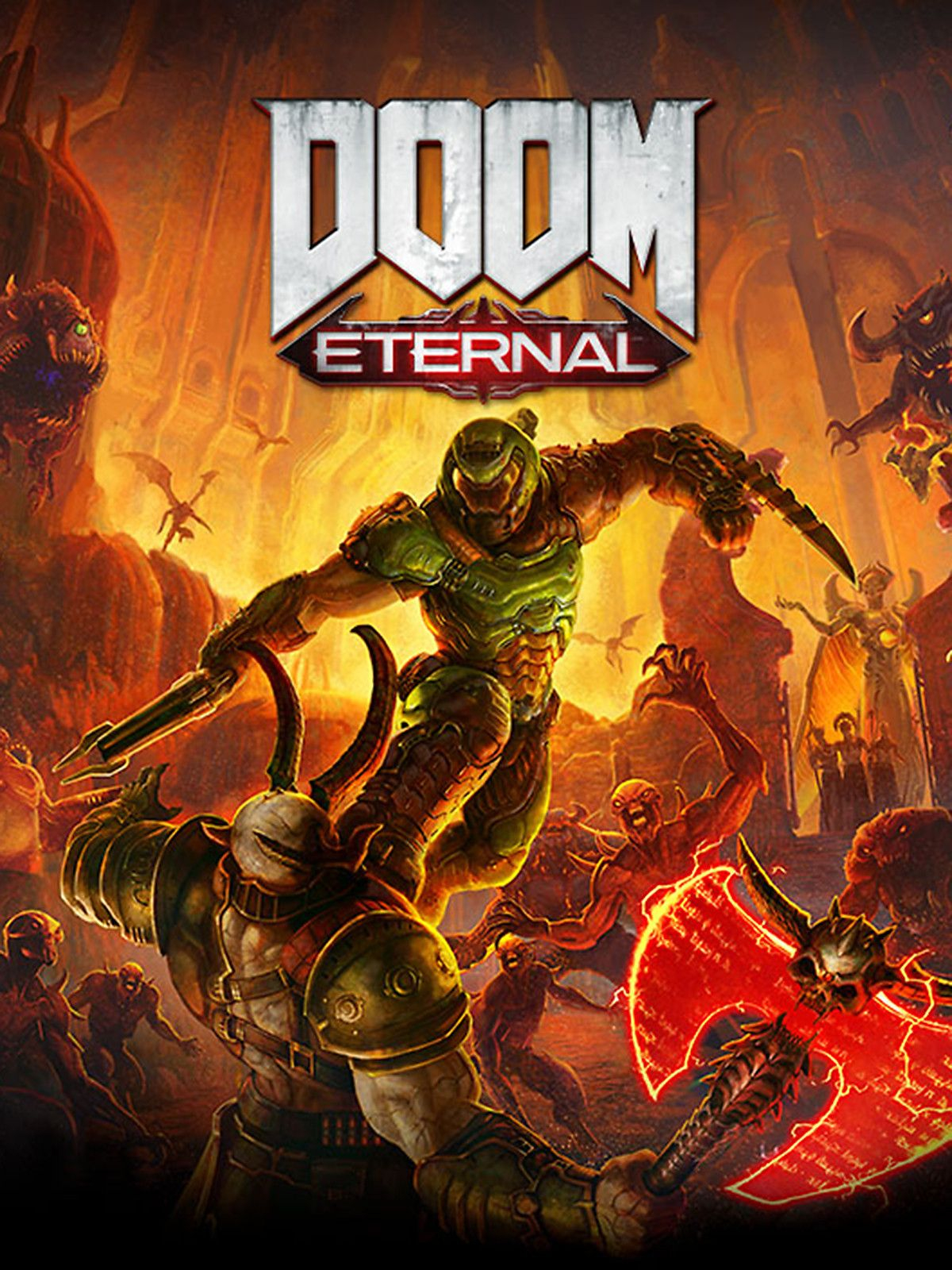 Redeems on Bethesda
Developed by id Software, DOOM® Eternal™ is the direct sequel to DOOM®, winner of The Game Awards’ Best Action Game of 2016. Experience the ultimate combination of speed and power as you rip-and-tear your way across dimensions with the next leap in push-forward, first-person combat. Powered by idTech 7 and set to an all-new pulse-pounding soundtrack composed by Mick Gordon, DOOM Eternal puts you in control of the unstoppable DOOM Slayer as you blow apart new and classic demons with powerful weapons in unbelievable and never-before-seen worlds.

As the DOOM Slayer, you return to find Earth has suffered a demonic invasion. Raze Hell and discover the Slayer’s origins and his enduring mission to rip and tear…until it is done.

Gain access to the latest demon-killing tech with the DOOM Slayer’s advanced Praetor Suit, including a shoulder-mounted flamethrower and the retractable wrist-mounted DOOM Blade. Upgraded guns and mods, such as the Super Shotgun’s new distance-closing Meat Hook attachment, and abilities like the Double Dash make you faster, stronger, and more versatile than ever.

You can’t kill demons when you’re dead, and you can’t stay alive without resources. Take what you need from your enemies: Glory kill for extra health, incinerate for armor, and chainsaw demons to stock up on ammo. These tools are the key to your survival and becoming the ultimate demon-slayer.

A New Class of (Destructible) Demon

Obliterate more demons than ever before, each with unique attacks and abilities. Fan-favorite classics such as the Pain Elemental, Archvile, and Arachnotron make their return, while a horde of totally-new demons join the roster including the DOOM Hunter, Marauder, and the Gladiator. Rip apart your favorite demons to the core with DOOM Eternal’s “destructible demons” system and take your power fantasy to new levels.

As the Slayer, allow other players to invade your campaign as demons for a dramatic and unpredictable twist anytime you’re playing the campaign. Or be a demon and invade other players’ campaigns either by yourself or with someone else to give the Slayer a true taste of Hell.

CDKeys source their keys from cheaper regions, hence low prices. Kinguin and the like are just a storefront for individuals etc to sell keys on.

I don't see anybody complaining when big companies move their work abroad because it's cheaper to manufacture.

"Might as well torrent if buying from CDKeys " ‌ I don't think so
9 Comments
12th Aug
Who are Voidu? They like CDKeys?
12th Aug
@Freyalinia
Pretty much. They claim to be an official key store rather than a market place like Gamivo or Kinguin. I have bought from Voidu twice before without a problem.
12th Aug
if they are like cdkey that they are thieves too. These are not legal or authorised so I would prefer downloading the torrents than giving money to these scammers.
12th Aug
Unlike CDKeys, Voidu are an Ubisoft appoved digitial distributor. support.ubisoft.com/en-…ers

Agreed with Kayote though, you might as well torrent the game if you buy from CDKeys/Kinguin/G2A as the same amount of money ends up in the developer's pocket £0.

Anyone had any luck with the discount code? Doesn't appear to work for me
12th Aug

CDKeys source their keys from cheaper regions, hence low prices. Kinguin and the like are just a storefront for individuals etc to sell keys on.

I don't see anybody complaining when big companies move their work abroad because it's cheaper to manufacture.

"Might as well torrent if buying from CDKeys " ‌ I don't think so
12th Aug
Yeah CD keys buy their software abroad (wouldn’t be too dissimilar to using a VPN). The developer will still get some money but obviously not as much... No different really to buying a physical game in another country which is cheaper due to local currency etc

I wondered if these guys followed that model, rather than just a reseller of other people’s keys
12th Aug

Thats what i plan on doing when Cyberpunk 2077 is released. Get the TORRENT.
12th Aug
A great shame that it's not the Steam version, off putting for me. Cracking deal and game though!
13th Aug
youtube.com/wat…76s