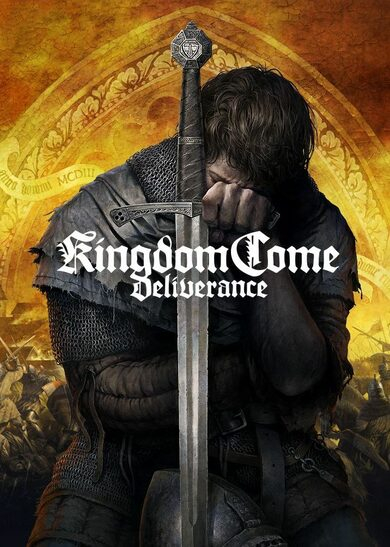 Kingdom Come: Deliverance enter into a story-driven open-world set in the times of the Holy Roman Empire. The game was developed by Warhorse Studios and it‘s a really cruel medieval piece to play through. Experience the ruthless game’s role-playing nature from the very first steps that you’ll take and know this; it won’t be a walk in the park.

Buy Kingdom Come Deliverance Steam key and experience a thrilling story that starts in Bohemia, where your character, the son of a blacksmith named Henry, has his life shattered. A bunch of raiders, ordered by King Sigismund himself, slaughters your family and friends right in front of your eyes, and by a miracle, you manage to escape.

Now, burning with the vengeance and no options to unleash your wrath, you find yourself serving Lord Radzig Kobyla, who’s organizing a rebellion. Kingdom Come Deliverance steam key unlocks a dark journey in a world corrupt and merciless. Can you find a new meaning, and rise beyond the surrounding darkness?

I think this is going to be free on Epic games next week.

Free this Thursday
12th Feb
About to be free on EGS next week lol
Edited by: "che100" 12th Feb
12th Feb
it's free tomorrow
12th Feb
Think we've covered that one off...
12th Feb
Is this free tomorrow, can anyone help?
12th Feb
Free at Epic Games on Thursday 13th February 4pm. Does that complete this?
12th Feb
Free on EGS this week - tomorrow afternoon
12th Feb
It is a brilliant game though (assuming it is your cup of tea), spent far too long playing it.
12th Feb
Do we know if it's free anytime soon?
12th Feb
As others state, 13th February this will be free with Epic and you will also need to download the Epic game launcher.
Edited by: "Malabus" 12th Feb
12th Feb
Lol nerds
12th Feb
Sweet thanks op, bought! Heat from me, cant see it getting cheaper any time soon!
12th Feb
Has anyone mention this is free tomorrow yet?
12th Feb
THIS GAME ITS FREE IN EPICGAME! ! ! 💣🔥
12th Feb
I'm sure I read somewhere that this is going to be free on Epic store tomorrow, can anyone confirm?
12th Feb
Yeah but then you have to use the EGS
12th Feb
Genuine question, will the free version have any of the DLC, or is that the point? They drag you in and you get addicted, then buy the DLC?
13th Feb

Yeah exactly that just the base game
13th Feb

Yeah exactly that just the base game