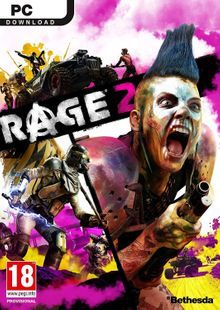 In a dystopia wasteland following a direct strike from an asteroid that has devastated the earth you are battling The Authority a band of mechanical mutants led by General Cross. There are also gangs of bandits, raiders and other bad guys to watch out for and destroy at the first opportunity.

You will play as Walker, a ranger that can be male or female, according to your preferences. Early in the game, you are guided to find the first Ark, a high-tech survival shelter built before the asteroid strike to ensure that some things and people at least would survive

The story line is pretty simple – you are the ‘good guy’, you need to find the bad guys and shoot or otherwise destroy them. Look out for more Arks along they way they hide excellent pieces of technology that will help you boost your weapons and tech capabilities.

For example, there is the Slam, which sends out a shockwave blast when you activate it near enemies sending them tumbling about from the concussion and allowing you to clean them up with little comeback. The higher you are when you deploy it, the more impressive the blast, so time it carefully so as to maximise this already powerful (and rather splattery!) weapon.

Slam is an ideal crowd-clearing weapon as you can be swamped with enemies at points in the game and this is a great way to blast them to smithereens and clear your path.

Shatter is another good power-up to find, allowing you to blast towards opponents in an energy surge that will destroy enemy armour and – if they are close enough – the enemies themselves.

Super Shotgun
The shotgun is amazing – offering such accurate power and authentic-seeming impact that your shoulder almost aches as though the stock of the rifle is socked tightly into it rather than you having just clicked a mouse button. But when you hold the right mouse button as you fire, the spread of the shot tightens and the impact increases even more, so you can almost hose your enemies away, clearing them out of your path brutally.

All weapons can be made more powerful when you have created enough chaos and mayhem to activate Overdrive mode, which is achieved by pressing the V key. It is not only weapons that benefit, regeneration times are shorter, powers are stronger and refills your health metre.

Location, location, location
The map is quite small compared to some other games, which means that you can fairly easily reach all the outposts. There are three story arcs to choose from, or you can opt to go your own way, exploring and scavenging the wasteland on your own – always keeping an eye out for enemies, be they The Authority or gang members

Desert
Much of the terrain is post-apocalyptic desert with the accompanying miles of emptiness broken with Badlands-style geography, abandoned cities and, of course, subtle signs marking the position of the Arks.

Jungle
The jungle is satisfyingly dark and brooding with plenty of opportunities for menacing eyes and/ or lights to gleam out at you, both terrifying you and giving you a neat target to aim for before all hell breaks loose.

Play it on game pass pc instead
4th Feb

Grrr, tell me about it! Another bloody launcher required... The same thing is happening for CoD, its all Battle.net now with them!

That aside, I'm going to have to bite I'm afraid! Got a couple of days off now and need a bit of straight forward action. Plus, I actually really enjoyed the first. Heated OP.
4th Feb

Play it on game pass pc instead

Keep thinking about this but its the time limit of the trial. I'm not paying for a subscription, yet.

Isn't Metro Exodus on there too? Another PC title that isn't budging on price. Not on Steam anyway.

Both are on there yes. Well worth game pass.
5th Feb
Now i am getting tempted. Thinking may be wait for the £5.00 level.