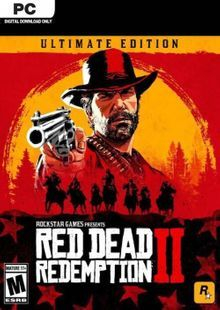 The Red Dead Redemption 2: Ultimate Edition delivers all of the Story Mode content from the Special Edition plus additional bonuses for online including:

Black Chestnut Thoroughbred: Outrun the competition with this thoroughbred racehorse in a striking black chestnut coat and also receive the exclusive High Plains Cutting Saddle beautifully crafted in jet-black leather with gold metal accents. This horse and saddle are available in online.

Free Access to Additional Weapons: Get access to the Volcanic Pistol, Pump Action Shotgun and Lancaster Varmint Rifle, free of charge from Gunsmiths in online.

Rank Bonuses: As a great start for all Ultimate Edition players, you can rank up faster in online, up to rank 25.

Red Dead Redemption 2 for PC is the ultimate way to experience one of the most critically acclaimed games of all time, winner of over 175 Game of the Year Awards and recipient of over 250 perfect scores.
PostTweetShare Share with WhatsApp Share with Messenger
Community Updates
CDKeys DealsCDKeys voucher codes
New Comment Subscribe Save for later
7 Comments
6th Feb
Getting closer to biting point
6th Feb
Hold off a bit longer, prices will only go south as the gold rush is nearly over
7th Feb
This price on steam and I'm in.
7th Feb
Anyone else find the game boring?
7th Feb
Don't forget TopCashback earn Up to 7% cashback
8th Feb
£34.99 now
8th Feb

Anyone else find the game boring?

Just you I think Barry.