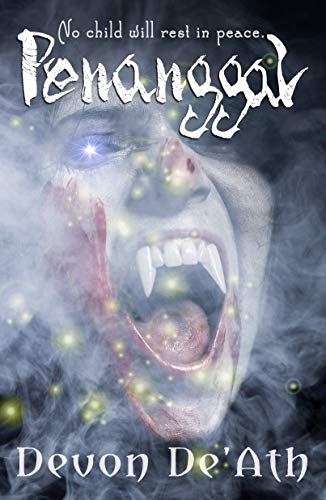 No child will rest in peace.

When Matthew Dempster returns to England on furlough with his Malaysian bride, rest and relaxation elude them.
Troubling incidents and whispered rumours of a supernatural evil in Kampung Damai seem to have followed.

Women miscarry and waste away. Adults are fatally savaged and children devoured. Stories circulate of an escaped big cat or exotic pet, attacking from tunnels beneath the ancient streets of Nottingham.
The truth steals courage from the stoutest heart and threatens the sanity of any who face it.

A kaleidoscope of individuals, each with a fragment of the puzzle, cross paths during their personal search for answers.

Will anyone uncover the beast?

How do you defeat a creature whose existence defies all natural laws?

Something sinister lurks beneath respectable society.

When nine-year-old Victoria Hanson escaped a murderous cult, she hoped the nightmare was over. Adopted by a childless couple and given a new identity, Vicky buried the loss of her parents and brother.

Partnering a former homeless man turned private investigator, Vicky searches for answers. Powerful, prosperous and connected, the reinvigorated cult's influence sees the pair turn fugitive from the law. A desperate race ensues. Can Vicky and her unlikely companion unmask this secret society and clear their own names, before the final atrocity unfolds?
PostTweetShare Share with WhatsApp Share with Messenger
Community Updates
Post a comment