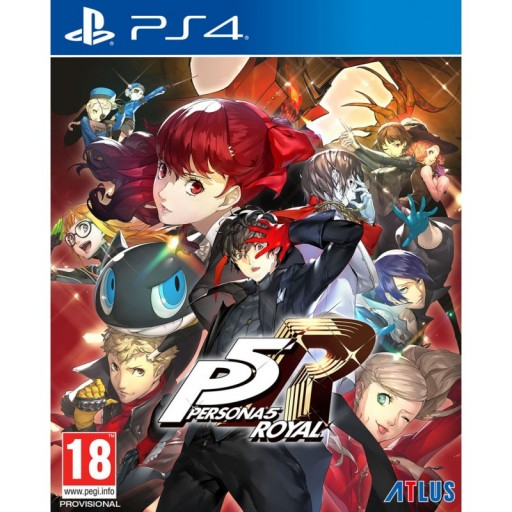 The Launch Edition includes the game in a limited edition Steelbook case and a dynamic PS4 theme download. 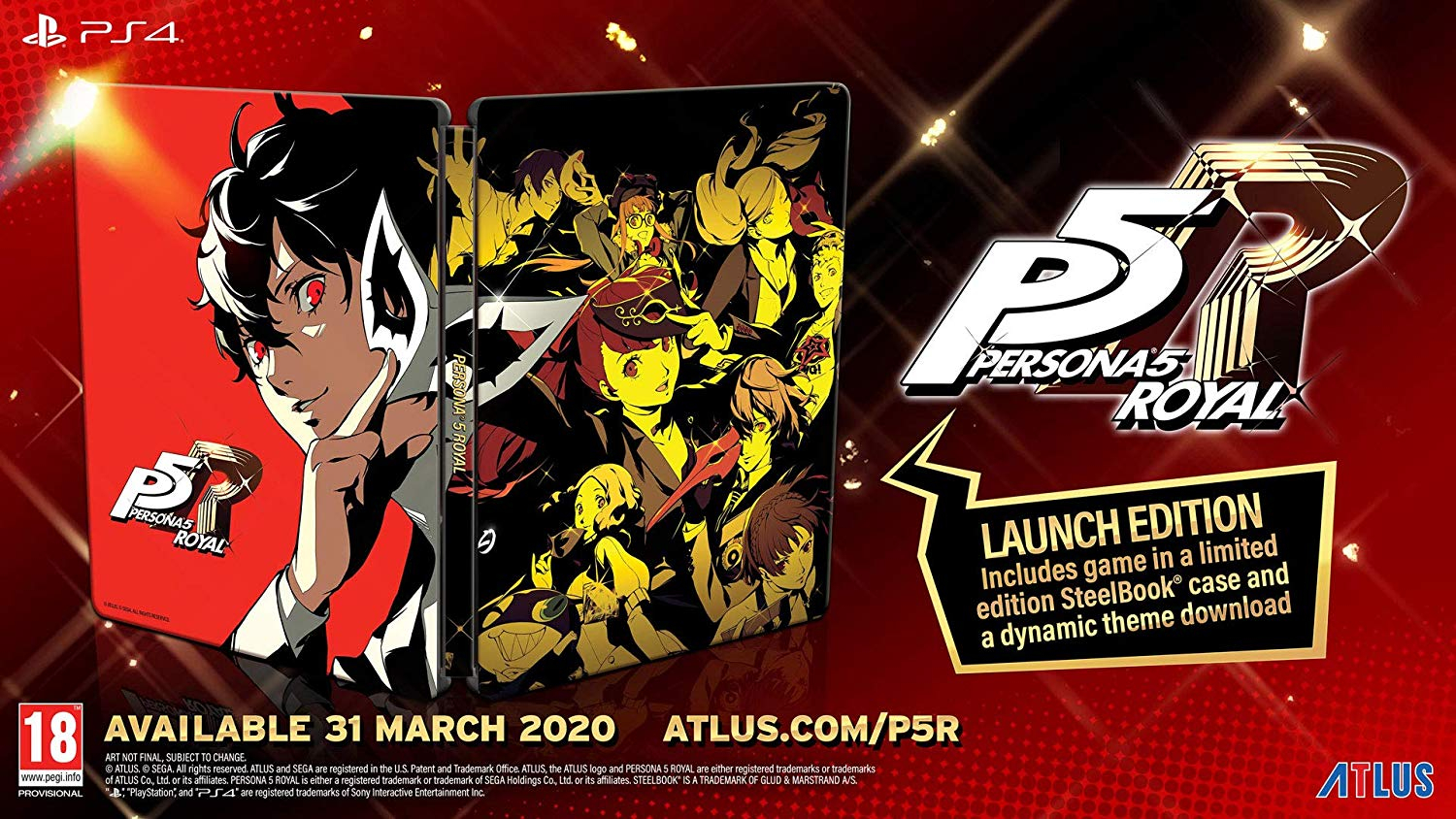 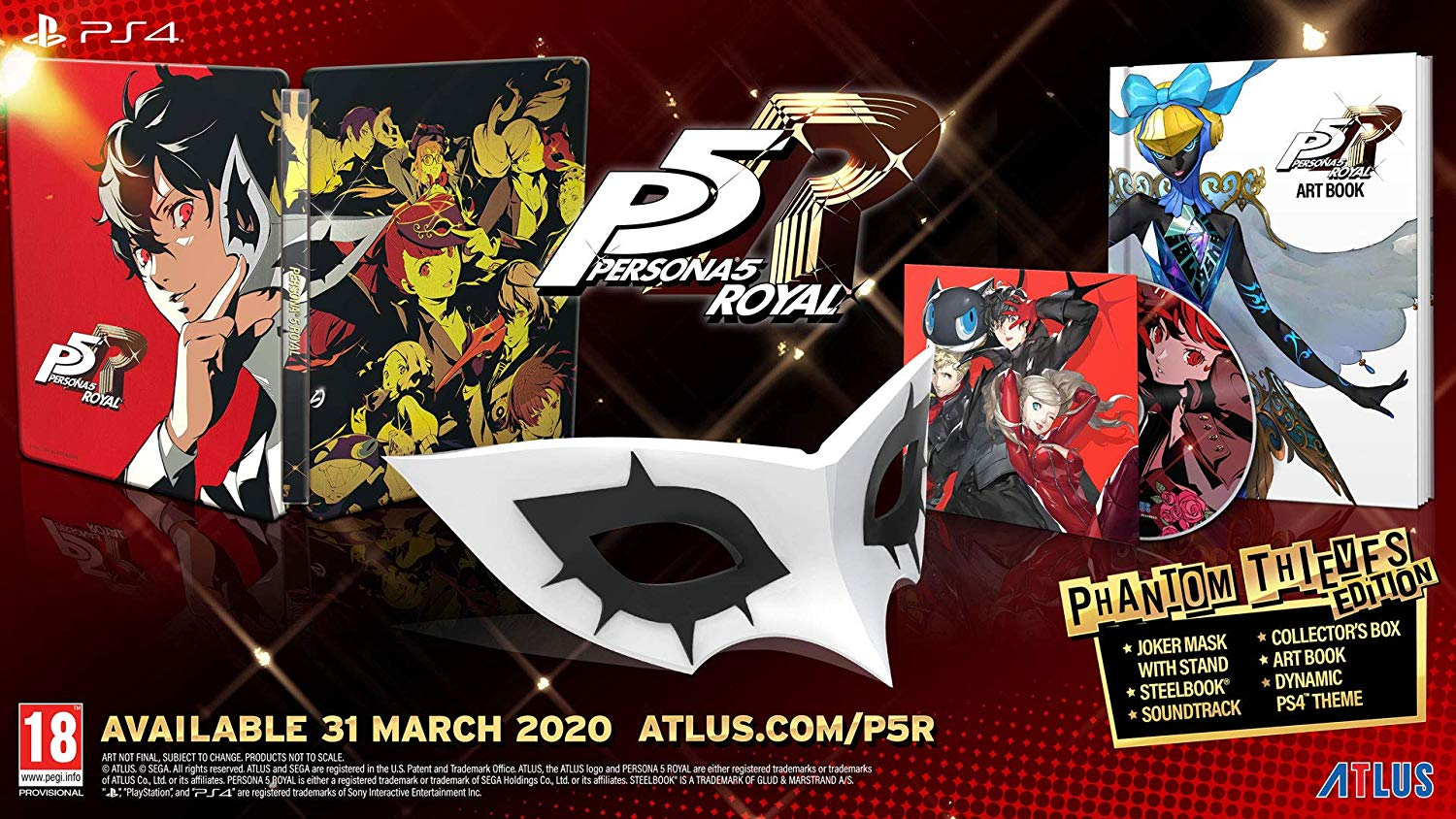 Prepare for an all-new RPG experience in Persona 5 Royal based in the universe of the award-winning series, Persona! Don the mask of Joker and join the Phantom Thieves of Hearts. Break free from the chains of modern society and stage grand heists to infiltrate the minds of the corrupt and make them change their ways!

Persona 5 Royal is packed with new characters, confidants, story depth, new locations to explore, and a new grappling hook mechanic for stealthy access to new areas. With a new semester at Shujin Academy, get ready to strengthen your abilities in the metaverse and in your daily life. Persona 5 Royal presents a unique visual style and award nominated composer Shoji Meguro returns with an all-new soundtrack. Explore Tokyo, unlock new Personas, customize your own personal Thieves Den, discover a never-before-seen story arc, cutscenes, alternate endings, and more!

Even for the most seasoned Phantom Thieves among us, Persona 5 Royal is a new challenge to defy conventions, discover the power within, and fight for justice.
Wear the mask. Reveal your truth.

PostTweetShare Share with WhatsApp Share with Messenger
Community Updates
The Game Collection DealsThe Game Collection promo code
If you click through or buy, retailers may pay hotukdeals some money, but this never affects which deals get posted. Find more info in our FAQs and About Us page.
New Comment Subscribe Save for later
28 Comments
4th Dec 2019
Great price, well spotted OP
4th Dec 2019
May switch my preorder


Though just to point out for any who may not know game collection will charge you before this is released by about a month
4th Dec 2019
Ordered. What a deal. Thanks mate
4th Dec 2019
Thanks
4th Dec 2019
Thanks alot mate saved me a tenner
4th Dec 2019
Phantom Thieves edition OOS, must have used up their pre order allocation
Edited by: "Colin8836" 4th Dec 2019
4th Dec 2019
Never got around to P5 but loved P3. Would you say it's necessary to play P4 before I jump in? I'm aware the continuity doesn't strictly follow on.
4th Dec 2019

No not at all. Is a bit like final fantasy in that the stories don’t follow on from one another. It’s a great game so if you liked persona 3 you will like this too.
4th Dec 2019

P4 has nothing to do with P5, either story-wise or even game play-wise. P5 had major changes to its game play core with the same Persona concept, of course. I loved P4 more than P5 though. It was more "soothing". The OST in P4 was amazing too and my favourite was the winter theme song. After finishing the game and knowing what is coming next, the song would hunt your for the remaining hour of game play you had left on your hand. P4 is still a last gen game whilst P5 is for current gen in terms of how it has been developed.

Either way, I'm not too fussed about the story - I'm just wary about what it'll be like if I try and play 4 after I've done 5 gameplay-wise.
4th Dec 2019
Only thing that annoys me is I gotta rebuy the dlc
4th Dec 2019

I thought you are asking about P4. ‌ If you play 5 and loved it then going back to 4 would be a bit difficult because P4 is very basic in terms of everything if you compare it against 5. But instead, P4 IMHO has a much much better story. Better characters and better environment and let's not forget the OST. P4 is my all time favourite Persona but that is just my "Persona" opinion.
4th Dec 2019
Almost tempted to go for the special edition as the soundtrack is phenomenal.
4th Dec 2019
Its now 1080/60fps?
4th Dec 2019

Only thing that annoys me is I gotta rebuy the dlc

There was an announcement saying you didn't in the West though wasn't there??

Also OoS already. I swear this site only gets like 10 copies of these editions lol
Edited by: "Poraro" 4th Dec 2019
4th Dec 2019
Feel very mixed about this, I already got the Take Your Heart Edition upon release, don't think I can justify another Special Edition of the same game, might go for the Steelbook version though.
4th Dec 2019
I'll just explain to the wife it's a different game if she questions why I've got 2 collectors editions..
4th Dec 2019
Darn it, out of stock
4th Dec 2019
How ironic, I checked this morning to see if there was a listing and nothing and now it does appear its already sold out ...

Hopefully they bring in more stock given the time of the launch
4th Dec 2019
If anyone has gold shopto account it's been dropped to £37 just got an email
4th Dec 2019
I was going to get Persona 5 for crimbo, but it's super hard to get hold of a decent prices copy... Would you hold off and just get this one?
4th Dec 2019

It's an amazing game, and one I'm looking forward to playing through again. One of the few games I'd do that with.

However if you still haven't played through it yet, I would just wait.
4th Dec 2019

Thanks @Poraro for the advice. It's hard enough to get a normal one so think I may take the dive and preorder this one.
4th Dec 2019
Hot . Won't preorder I think i would dive in at 20£. I have the normal one though
5th Dec 2019
It's on Base now but there is no indication if it is the Steelbook Launch Edition...
base.com/buy…htm
5th Dec 2019

As has been said, not necessary to play 4 before 5 but you should because, 4 is brilliant! I'm just kicking myself that I don't have a PS4! Played 5 on the PS3 and was hoping they'd be a switch release but no joy.
1st Jan
cant decide on if i should get this, i played the first one in 2018, is there enough new content to come back to it and still enjoy it?
1st Jan

Apparently there’s a brand new semester, but I don’t know if it’s worth another 100hr playthrough