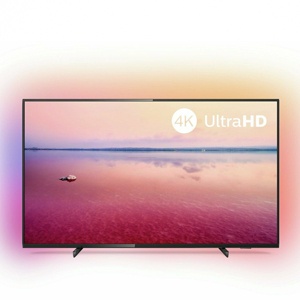 This Philips Ambilight TV will change your TV experience dramatically. Ambilight extends the picture with LED lamps on your wall and makes the viewing much more immersive and at the same time more comfortable for your eyes. All this combined with a state of the art picture improvement system that takes your 4K Ultra HD content to new levels in sharpness, colors, motion and contrast.

3 sided Ambilight that gives you an immersive viewing experience with light beyond the screen.

Additional features:
PostTweetShare Share with WhatsApp Share with Messenger
Community Updates
EBay DealsEBay discount code
If you click through or buy, retailers may pay hotukdeals some money, but this never affects which deals get posted. Find more info in our FAQs and About Us page.
New Comment Subscribe Save for later
12 Comments
6th Sep 2019
If anyone is interested in buying, I have this TV and posted a bit of a review on the 70 inch link today. Great price heat added for an amazing TV
6th Sep 2019

can you please pm links to review thanks
6th Sep 2019

can you please pm links to review thanks

Its just on here for the 70 inch as it's the same panel (just an extra 5 inches) but my review is for this exact tv. Hope it helps!

what review? this is last years model anyway

what review? this is last years model anyway

What did they say as to why it was so bad then?

Exactly, the reason I don't believe it for a minute is I have this TV and its brilliant. Ive also got a Samsung oled and a 4k LG 50 inch and had a lot of tvs over the years, so I'd easily spot a bad screen! Blown away by this one for the money so I'm intrigued by the so called terrible review!
8th Sep 2019