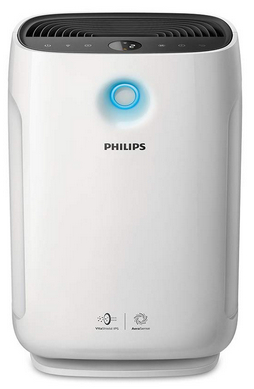 Fast: captures 99.9% of bacteria in 1hIdeal for allergy sufferers: removes 99% of airborne particles such as dust, pet hair and pollenApp controls the air purifier with advice on air quality outside & inside your home Effectively cleans rooms up to 79 mEnjoy a peaceful sleep with night mode setting.

There is less polution overseas

I also have one of them in addition to the philips. Where you get your replacement filters from.
28th Jul 2019

Not sure if the Philips is better they make the same claims about 99.97% 3 microns but the Levoit is cheaper. I bought a filter replacment for it (£18) but still going strong on the original after 18 months.

Just putting it out there!

I have one of …I have one of thesehttps://www.amazon.co.uk/Levoit-Purifiers-Filtration-Eliminator-LV-H132/dp/B071D58ZY5Not sure if the Philips is better they make the same claims about 99.97% 3 microns but the Levoit is cheaper. I bought a filter replacment for it (£18) but still going strong on the original after 18 months.Just putting it out there!

I have one of …I have one of thesehttps://www.amazon.co.uk/Levoit-Purifiers-Filtration-Eliminator-LV-H132/dp/B071D58ZY5Not sure if the Philips is better they make the same claims about 99.97% 3 microns but the Levoit is cheaper. I bought a filter replacment for it (£18) but still going strong on the original after 18 months.Just putting it out there!

Tried the bigger levoit sent it back. The low speed doesn’t move enough to be effective and I couldn’t sleep with higher speeds. Also the amount of charcoal in the filters is laughable. The honeycomb is not even half full, probably the reason that even spraying air freshener ( which incidentally is toxic) and waving nail varnish around the air intact didn’t register. This small one is not big enough to do anything in a normal size room.
Unfortunately, the claims of most “air purifiers” is over exaggerated. You have to spend a lot of money and move a lot of air to be effective
28th Jul 2019

Exactly, worth reading a bit and understanding cadr rating. But even then need to know that cadr is tested at highest fan speed, so should really go as high as possible.
29th Jul 2019

Considering buying this. Is there an obvious difference in air quality?

Yes, the air is noticeably cleaner and less congested after use. It has a gentler impact on smells, which maybe related to the thinner activated carbon filter (@Jaybeam) but it's a genuine 3 stage HEPA filter for £72. It improves air quality definitely which is what it's designed for, wouldn't recommend for people who produce a lot of smells.

I use it in a small room 15ft x 15ft. Appreciable benefit takes 15-20 minutes and continuing over time. I tend to put it on for a few hours here and there, after vacuuming, whilst using wood burning stove, or just when the air is feeling 'muggy'. On the lowest setting the sound is unobtrusive and low wattage so I leave it on to keep turning the air over. I have had black mould in the room, used the Levoit after cleaning that off (with masks on etc), it hasn't come back and I trust the HEPA filter is working. I did some research before buying and the HEPA filter did well in tests catching pollutants - better than Philips..

Looked into CADR ratings which is basically how quickly it turns over the air (clean air delivery rate), so relates to coverage and airflow. The Philips has a CADR of between 179 and 211 cfm, the Levoit CADR is 110 cfm. So it's just a bit over half the "power", but even at £260 the Philips is nearly four times the price, is a lot bigger, noisier, and running costs are high as it consumes more power and filters are expensive.

But the Levoit (the model I listed) is only designed for a small room (or to use in proximity, in a larger room). I think for a 15ft x 15ft room it's great. Bigger room and I'd look at their next model up or a Vax. The Levoit appear to be being honest in their claim of 129ft² coverage, which I'm exceeding just a bit (but it's OK). Philips however claim 79m². That's 850ft² or just under 30ft x 30ft. Unlike CADR, this figure is not independently tested, it's the manufacturers claim, which Which? just regurgitate (had a look) - and that reminds me not to pay too much attention to Which?, and given the CADR (Which? don't specify that either)... I doubt it!

Do you have a link?

Picked some up super cheap on Ebay, it's worth keeping an eye on the prices because they can vary a lot