In the far reaches of space, a mysterious yet strangely familiar world awaits all Nintendo fans. It's full of surprises, cute creatures and lots of fun. Fasten your seat belt and get ready to land as little Pikmin embark on their biggest Nintendo Switch adventure yet in Pikmin 3 Deluxe. The third installment in the popular strategy game series made its debut on Wii U. The Nintendo Switch version has plenty of new content, with even more options for cooperative play and a whole range of settings that make it easier for newcomers to get started.

This game is no run-of-the-mill adventure. Rather, after a crash landing on a strange planet, an unusual reconnaissance mission begins. Players lead a crew of three explorers and a squad of lovable Pikmin. You have to solve puzzles, defeat nasty creatures and explore a variety of different sceneries. Whether they're traversing the Frozen Wastes of Confusion, the River of Change, or the Garden of Meeting, life forms that are as whimsical as they are admirable abound.

Pikmin 3 Deluxe for Nintendo Switch offers numerous expansions and improvements. This includes the ability to play Adventure mode and the new Bonus Adventures cooperatively with a friend. In addition, all additional levels that were released as downloadable content for the mission mode of the original title are already included. New levels of difficulty, focus targeting, optional hints, and the ability to play at a more relaxed pace will make it easier for less-experienced adventurers to navigate the alien planet.

Throughout their journey of discovery, players will meet and command a variety of different Pikmin. The enthusiastic team helps them to clear countless obstacles out of their way. Because depending on the color, the Pikmin have different abilities and strengths: the blue Pikmin, for example, can breathe underwater and collect objects, while the pink-colored winged Pikmin can simply cross water or deep pits by air. Only those who cleverly divide their Pikmin teams, assign them appropriate tasks and switch between the three crew members can make their way through the numerous landscapes.

Experienced players can also test their skills in Pikmin 3 Deluxe in new challenges with Olimar and Louie exploring planet PNF-404. And everyone who is looking for a bit of competitive gaming fun can experience exciting multiplayer competitions in the binge duel 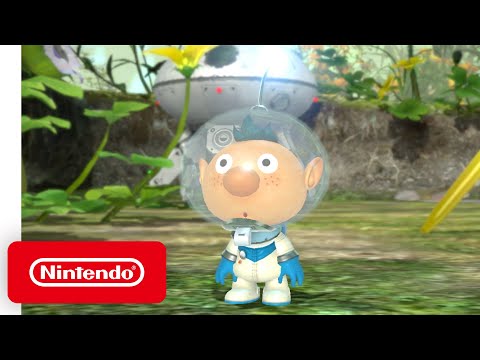