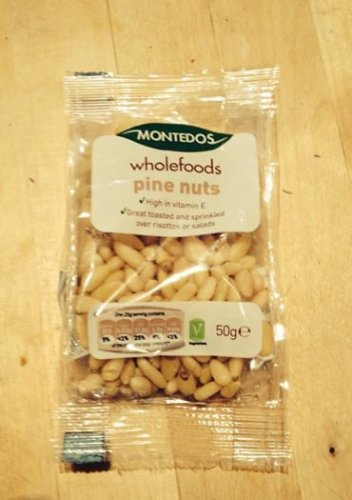 Popped into Lidl today, and saw these pine nuts for 99p, good price. Looked in Holland & Barrett for some last week as my son loves them, but walked out again when I saw the price!
Will upload receipt
(I have also listed the strawberries on a seperate post!)
PostTweetShare Share with WhatsApp Share with Messenger
Community Updates
LIDL DealsLIDL voucher codes
New Comment SubscribeSave for later
26 Comments
15th Feb 2014
[image missing]

deleted40649
15th Feb 2014
valentine cucumber
15th Feb 2014
love them
15th Feb 2014
bargain, heat added
15th Feb 2014
OK, a lot of people do not know but there is a Major problem looming regarding Pine Nuts. I work in the food industry and I have heard that Waitrose have withdrawn all their Pine Nuts. The Chinese evidently have been mixing in a different nut that looks and tastes like a Pine Nut and this nut causes some problems with a bad aftertaste for quite a few days after eating these nuts.

foodauthority.nsw.gov.au/sci…th/
15th Feb 2014
I had the bad aftertaste recently after eating pine nuts, apparently doesn't effect everyone but be aware. I won't eat them again. The taste was like metallic and lasted a week.
15th Feb 2014
Pine nuts have shot up in price over the last few years. £20 a kilo is about average, this pack only looks cheap because its just 50g.
15th Feb 2014
Anyone know where these can be got with the shell still on?
15th Feb 2014
Like snacking on some delicious furniture polish.

Anyone know where these can be got with the shell still on?

I absolutely lurrrv pine nuts. A little worried about the after taste issue though. Going to risk it anyway as I'm a pine nut FREAK! Thankyou hot deal.
15th Feb 2014
Actually cazsilver have you ate any out the pack you bought? Any strange after taste?....... o_O
15th Feb 2014
That Chinese thing with pine nuts was in 2011 and they have sorted the problem by only using traceable sources ie like the horse meat scandle that happened. Just people scare mongering again
15th Feb 2014

Seen the comments about an after taste. Had some a few hours ago, nothing as yet....
Edited by: "cazsilver" 15th Feb 2014

always this price in Lidl

You're lucky the dose of pine-mouth I had lasted well over a month. That was maybe three years ago from Tesco pine nuts. I would never touch the things again - which is a shame I used to love making fresh pesto
15th Feb 2014

FSA link on that
http://www.food.gov.uk/business-industry/imports/banned_restricted/pine-nuts-china/#.Uv_01fl_uls

The belief is that Pinus armandii is the culprit.

Well how come I have been told that Waitrose just withdrew their stock?
16th Feb 2014
Had a similar metallic taste from their roasted and salted peanuts. Usually very good quality.
16th Feb 2014

No, peanuts have nothing to do with pine mouth syndrome.

It's nothing to do with how the product tastes when you eat it - the pine nuts I ate tasted fine. What happens, to those who are susceptible, it doesn't effect everyone, is that any food or drink you take afterwards, for many weeks, tastes bitter. Everything you eat tastes bitter. It's weird and rather spooky - you have no symptoms unless you eat or drink something. As I understand the current scientific view - nobody knows why, except it is due to some previously non-edible pine seed varieties being corruptly introduced into the food-chain in China.

I was totally freaked out by it. I actually wondered for the first day or so if my wife was trying to poison me! Then every food was tainted for over a month. It was absolutely awful.

Why would the criminal kleptocracy that is China actually deal with the problem of fake products? Hell they have owned all of our national debt and they are pretty much the only supplier of manufactured goods to us. We are almost totally reliant on their system.

China is the total Capitalist dream - a system ruled by people outside of the law and the market without democracy! We were told by the ruling classes that when we fought for Capitalism during the Cold War we were fighting for democracy. What a joke. What was behind the Iron Curtain was worth overcoming but the future that we have been sucked into will maybe be even worse!.

In the future you will maybe be able to buy whatever you want - just don't expect it to always be what you paid for
16th Feb 2014
I had the metallic taste for months, and was seriously worried for a while. Tesco cs refused to remove the product and were an absolute disgrace in all ways. I haven't shopped in Tesco since. Buy cheap pine nuts at your peril and not at all if you cook for a living. You may not be able to work.
16th Feb 2014
Sounds like the ultimate diet aid. Bitter taste will keep me out of my Creme Eggs hopefully!
10th Aug 2014
I have found 2 only at Cricklewood Lidl, near checking our tills.
Very good quality and delicious with buckwheat