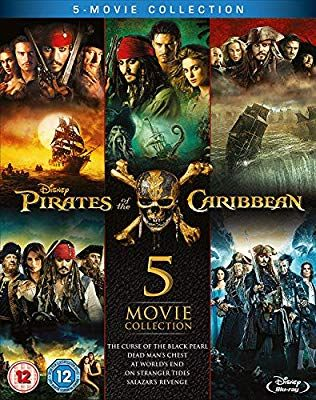 Synopsis
Pirates Of The Caribbean 1: The Curse Of The Black Pearl: Jack Sparrow (Depp, in an Oscar nominated performance) and Will Turner (Bloom) brave the Caribbean Sea to stop a ship of pirates led by Captain Barbossa (Rush), who intend to break an ancient curse using the blood of the lovely Elizabeth Swann (Knightley)... Subtitles: English, English for the Hard of Hearing

Pirates Of The Caribbean 2: Dead Man's Chest: Captain Jack Sparrow (Johnny Depp) is mortified to discover he owes a blood debt to the legendary Davey Jones, captain of the ghostly Flying Dutchman. With time running out, Jack must find a way out of his debt or else be doomed to eternal damnation. And as if this weren't enough, his problems prompt the cancellation of the wedding plans of a certain Will Turner (Orlando Bloom) and Elizabeth Swann (Keira Knightley), who are forced to join Jack on another maritime misadventure. Subtitles: English, English for the Hard of Hearing

Pirates Of The Caribbean 3: At World's End: In the third installation of the ever-popular Pirates series, Pirates Of The Caribbean: At World's End, we find our heroes Will Turner and Elizabeth Swann allied with Captain Barbossa in a desperate quest to free Captain Jack Sparrow from his mind-bending trap in Davy Jones' locker. Navigating through treachery, betrayal and wild waters, they must forge their way to exotic Singapore and confront the cunning Chinese pirate Sao Fen (Chow Yun-Fat). Subtitles: English, English for the Hard of Hearing, Swedish, Norwegian, Danish, Finnish, Icelandic, Hindi and Dutch.

Pirates Of The Caribbean 4: On Stranger Tides: Johnny Depp returns to his iconic role of Captain Jack Sparrow in an action-packed tale of truth, betrayal, youth and demise. When Jack crosses paths with a woman from his past (Penelope Cruz), he’s not sure if it’s love or if she’s a ruthless con artist using him to find the fabled Fountain of Youth. When she forces him aboard the Queen Anne’s Revenge, the ship of the formidable pirate Blackbeard (Ian McShane), Jack finds himself on an unexpected adventure in which he doesn’t know who to fear more: Blackbeard or the woman from his past.

Pirates Of The Caribbean 5: Salazar's Revenge: Johnny Depp returns to the big screen as the iconic, swashbuckling anti-hero Jack Sparrow in the all-new “Pirates of the Caribbean: Salazar's Revenge.” The rip-roaring adventure finds down-on-his-luck Captain Jack feeling the winds of ill-fortune blowing strongly his way when deadly ghost sailors, led by the terrifying Captain Salazar (Javier Bardem), escape from the Devil's Triangle bent on killing every pirate at sea—notably Jack. Jack's only hope of survival lies in the legendary Trident of Poseidon, but to find it he must forge an uneasy alliance with Carina Smyth (Kaya Scodelario), a brilliant and beautiful astronomer, and Henry (Brenton Thwaites), a headstrong young sailor in the Royal Navy. At the helm of the Dying Gull, his pitifully small and shabby ship, Captain Jack seeks not only to reverse his recent spate of ill fortune, but to save his very life from the most formidable and malicious foe he has ever faced.