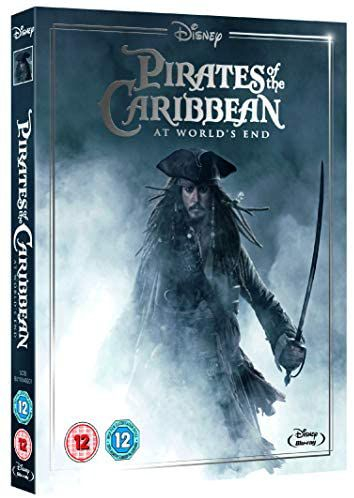 Description
Product Description
The third instalment of the popular action adventure franchise. After Elizabeth (Keira Knightley), Will (Orlando Bloom), and Captain Barbossa (Geoffrey Rush) rescue Captain Jack Sparrow (Johnny Depp) from the land of the dead, they once again face their foes Davy Jones (Bill Nighy) and Lord Cutler Beckett (Tom Hollander). Beckett, now with control of Jones' heart, forms a dark alliance with him in order to rule the seas and wipe out the last of the pirates. Now, Jack, Barbossa, Will, Elizabeth, Obeah witch Tia Dalma (Naomie Harris) and the rest of the crew must call the pirate lords, including the infamous Sao Feng (Yun-Fat Chow), and come together to make one final stand for freedom.

From Amazon.co.uk
Pirates of the Caribbean 3: At World's End is a rollicking voyage in the same spirit of the two earlier Pirates films, yet far darker in spots (and nearly three hours to boot). The action, largely revolving around a pirate alliance against the ruthless East India Trading Company, doesn't disappoint, though the violence is probably too harsh for young children. Through it all, the plucky cast (Keira Knightley, Orlando Bloom, Geoffrey Rush) are buffeted by battle, maelstroms, betrayal, treachery, a ferocious Caribbean weather goddess, and that gnarly voyage back from the world's end--but with their wit intact. As always, Johnny Depp's Jack Sparrow tosses off great lines; he chastises "a woman scorned, like which hell hath no fury than!" He insults an opponent with a string of epithets, ending in "yeasty codpiece."

In the previous The Curse of the Black Pearl, Sparrow was killed--sent to Davy Jones' Locker. In the opening scenes, the viewer sees that death has not been kind to Sparrow--but that's not to say he hasn't found endless ways to amuse himself, cavorting with dozens of hallucinated versions of himself on the deck of the Black Pearl. But Sparrow is needed in this world, so a daring rescue brings him back. Keith Richards' much ballyhooed appearance as Jack's dad is little more than a cameo, though he does play a wistful guitar. But the action, as always, is more than satisfying, held together by Depp, who, outsmarting the far-better-armed British yet again, causes a bewigged commander to muse: "Do you think he plans it all out, or just makes it up as he goes along?" As far as fans are concerned, it matters not. --A.T. Hurley

Synopsis
Johnny Depp, Orlando Bloom, and Keira Knightley return for a third slice of swashbuckling action in Pirates of the Caribbean: At World's End. The movie was shot back-to-back with the second entry into the series, Dead Man's Chest.