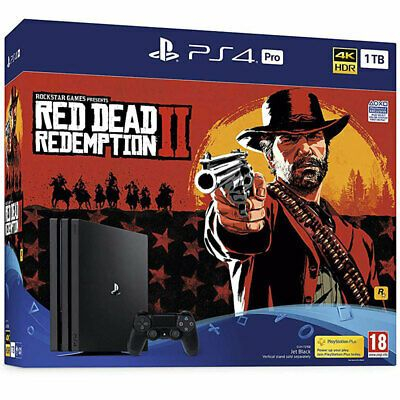 ULTIMATE PERFORMANCE Double the power with an incredible combination of visual quality and performance in a console.

HIGH DYNAMIC RANGE (HDR) TECHNOLOGYVisuals are more realistic, strikingly vivid and truer to what the human eye sees in the real world.

ULTIMATE SHARE PLAY AND REMOTE PLAY Share or stream your games in stunning detail with visuals of up to 1080p and 60fps.

TWO CONSOLES, ONE PS4 FAMILY Connect with friends on PlayStation 4 Pro and PlayStation 4 consoles, and hook up with the biggest online community of players with PlayStation Plus

GAMES All games are fully cross-compatible with PS4 Pro and PS4, and players compete online in the same multiplayer ecosystem.

This handsome iron-grey-coloured Ardennes War Horse can always be relied on in the heat of the battle. With greater courage and stamina than the average steed, this is a horse that knows how to keep its head under fire. The War Horse is available in Red Dead Redemption 2 Story Mode.

The Outlaw Survival Kit contains a collection of key supplies for enduring the rigours of life on the frontier, including items to replenish Health, Dead Eye and more. The Outlaw Survival Kit is available in Red Dead Redemption 2 Story Mode.
PostTweetShare Share with WhatsApp Share with Messenger
Community Updates
EBay DealsEBay discount code
If you click through or buy, retailers may pay hotukdeals some money, but this never affects which deals get posted. Find more info in our FAQs and About Us page.
New Comment Subscribe Save for later
Top comments
20th Nov 2019 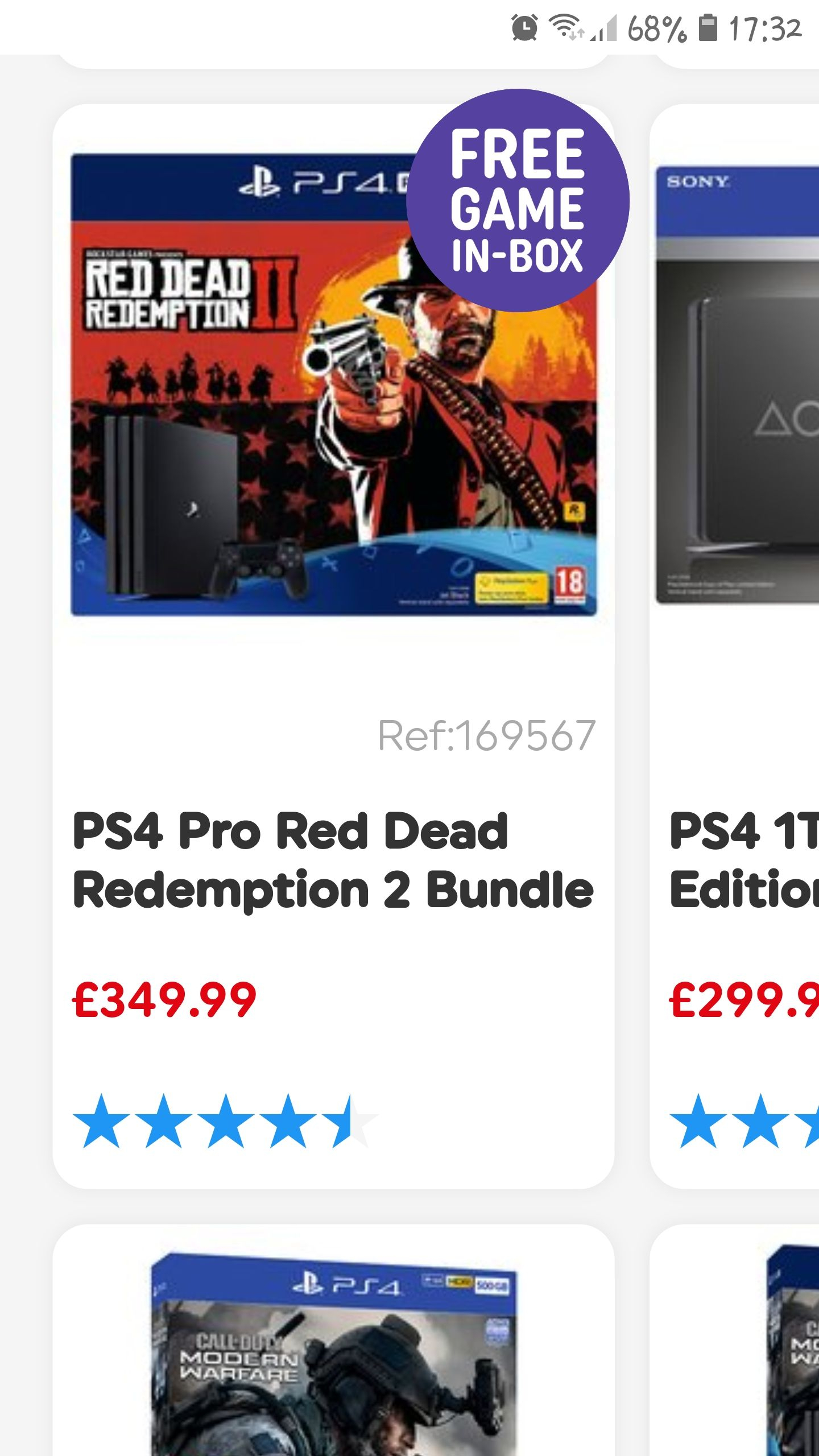 The RDR2 bundle was the first to feature quieter, cooler mode of the PRO. If you’re holding out for a pre BF deal on this model + RDR2 - this is it. Personally don’t think BF will go lower than this, only equal.
19th Nov 2019
People say quiet model, I have both, and it's not any quieter :/ Not like the Xbox which is silent.
19th Nov 2019

No this is definitely the quiet 7216B model as this was the first bundle to receive it.
19th Nov 2019

I got mine a year ago and I can't hear it.

Is that because you never switch it on?

Is that because you never switch it on?

No
20th Nov 2019
Upsettingly, my year-old CUH-7216b (that came in the RDR2 bundle) has become VERY noisy over the last 2 months. It was blissfully silent for a few months. It’s not become filled with dust and is cleaned regularly. Submitted a warranty claim to Sony and was told “they all do that” and one shouldn’t worry unless it’s crashing. Not ideal when you can hear your console when wearing headphones. Apparently, the thermal paste on the CPU dries out and stops working efficiently. Ugh.
Edited by: "_B3N_" 20th Nov 2019
20th Nov 2019

It mainly depends on if u already have a ps4! If u do don't bother upgrading unless u play it enough to justify the price and are trading in ur old console to offset the price. E.g. Game offering £120 for a ps4 500gb slim.

If u don't then opt for a pro over a slim! The extra loading/UI speed and boost mode will make up for lack of a 4k tv. The pro has a 1tb hdd where as the slim as 500gb and with most recent games topping over 100gb ull either only be able to have 3 games downloaded at a time. If u decide to buy an external hdd your minimising the price saving between the two models and there are a number of shortcomings with external vs internal. Automatic game updates or cloud saves from rest mode, loss of a USB port, pets/children knocking the cable incurring a error message mid game, etc.
20th Nov 2019
Ooh now do I get a decent graphics card and buy pc RODR2 for ~£330, or get a new PS4 Pro with RODR2 for £278??
20th Nov 2019

Sony are well known for saying faults are within spec with av gear, stick to your guns and insist on a rma. If you wouldn’t of excepted the performance when you first bought it then why should you accept it now less than a year on.
20th Nov 2019

Several games will run at 1080p60 on the Pro instead of 1080p30 on the standard PS4 so if you play those games then it will definitely give a better experience but it's not on that many games so check the ones you own and play a lot to see if this will offer any value to you. Personally I think that 1080p60 is a better experience than "4K"30 but you may think otherwise.
20th Nov 2019

How much you think a pro will go for on Black Friday?

Code isn't working for me, expired?

still working for me as of just now...