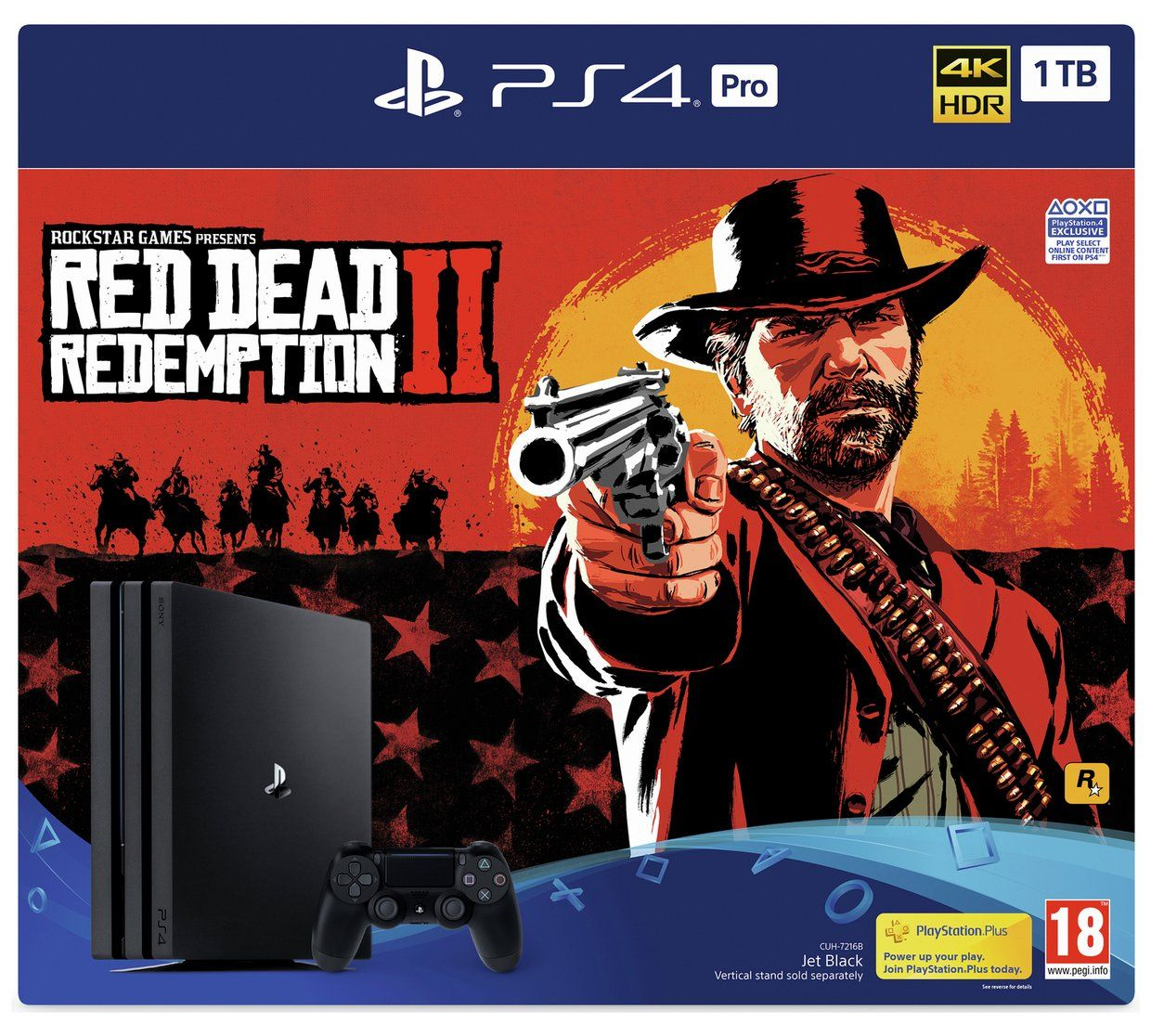 Not the best Deal but it's worth it if you want these games with the PlayStation Pro!
PostTweetShare Share with WhatsApp Share with Messenger
Community Updates
Argos DealsArgos discount code
If you click through or buy, retailers may pay hotukdeals some money, but this never affects which deals get posted. Find more info in our FAQs and About Us page.
New Comment Subscribe Save for later
Top comments
27th Oct 2018

Nah, it's crap. There's hardly been any promotion for it, and hardly anyone is even talking about it. £15 by Christmas, guaranteed.
28th Oct 2018

It's okay, check out this video of it if you're undecided.

Good deal if it was an X

lol PS4 Pro deal and you ask for an Xbox X.

Nah, it's crap. There's hardly been any promotion for it, and hardly anyone is even talking about it. £15 by Christmas, guaranteed.
27th Oct 2018

It's okay, check out this video of it if you're undecided.

At first I thought it was just the hype.

Good deal if it was an X

lol PS4 Pro deal and you ask for an Xbox X.

lol PS4 Pro deal and you ask for an Xbox X. GTFOH

‌ ‌ ‌
28th Oct 2018
Played Red Dead 2 last night, it’s so boring, it isn’t like GTA, it’s so slow and everything is really cumbersome. The long animations to do anything, the clunky controls and how I played 2 hours and didn’t even get to the world yet... got bored and put it on eBay.

Black Ops 4 is great because it’s Battle Royale mode is so fast and polished.... but it’s not quite on the level of PUBG for me.
28th Oct 2018

if 'wrong' could be a person, it would be you
28th Oct 2018
Call of duty 4 is complete crap, Haven’t played redemption yet so can’t comment on that
28th Oct 2018
If you’re looking to get a new console at the moment rdr2 is a blurry, muddy mess on the Pro. The pro is a very capable machine so it has to surely be something they can patch out later so I’m not knocking the console, the devs have screwed something up.

if you’re in the market for a new console for this game then it looks absolutely stunning in 4K on the One X so seriously consider that.

In time I think they will be able to close the gap because the Pro is capable of a lot more than the current mess of an image rdr2 is putting out on PS4 in comparison.

that being said. This is a good deal, so heat from me anyway.
28th Oct 2018
of course its nothing like gta its not meant to be,
game of the year so far

It's pretty bad on the normal PS4. Really slow frame rates when you get into the towns.
28th Oct 2018
Yeah Digital Foundry did the comparisons , Forbes outlines in this article.

Probably sounds like a rocket taking off playing this on a PS4. Get an X.

Blatant lie, had the launch and the 71xx series, all of them are jet engines.

The new 72xx series launched with the red dead bundle is a bit better, but far from whisper quiet.
28th Oct 2018

One X is better than Pro ?

Hardware wise yes, and in the case of this game definitely.
28th Oct 2018

Blatant lies a bit harsh, I did side by side tests and the older model was TWICE the volume of the newer mode under load
Edited by: "Spooooooooooooon" 28th Oct 2018
28th Oct 2018

The X looks good and all but it has a very small selection of games. The pro has tons of exclusives to play and these games are some of the best this generation. I am playing RDR2 on the pro and it does look blurry at 4k (Looks like a 1080p image)
28th Oct 2018

Wouldn’t say it has a small selection of games, all new games over the past year have had to have X support and many earlier games got subsequent X support patches. The availability of X enhanced games is very good now. Also considering there are some 360 games that are running in 4K, such as the original red dead redemption which looks amazing and holds up very well even today with the 4K update. PS4 does obviously have some excellent exclusives though.

I am am holding out hope that they can patch the rdr2 issues out on the PS4 pro though, it’s not really fair to the players paying top dollar for this game and the poor result appears to be down to their poor effort on it rather than any limitations of the console.
Edited by: "randomnut" 28th Oct 2018
28th Oct 2018
You'd be better off saving the £30 and just not bothering with CoD in my opinion.
28th Oct 2018

Everyone says this who doesn’t know what Bsttle Royale is, this version is Battle Royale and it’s great. Everyone I know has dropped Fortnite and gone to that.
28th Oct 2018

It doesn't actually bother me too much, it does still look great and most of all the gameplay is amazing 😁 not interested in it's online though. If Xbox have the better exclusives I will switch to them again. I had the OG xbox one at launch for dead rising 3 and forza (Still use it for 360 games)
28th Oct 2018

I don’t think people care, I mean playing Red Dead on the Xbox One X, then on a PS4, both on 4K TVs.... no one noticed a difference. You can look closely and pick out faults.... but it’s like picking between cameras in all the high end phones today, they all look good enough.

However the CPU in the Pro is like 200mhz slower, and this is a CPU limited game... plus who knows how much CPU each console dedicates to the system. I’m gonna guess the Xbox One is more efficient here because it’s Microsoft.

With those new Samsung 8K TVs with their amazing upscalers, I bet the PS4 version looks better than a Pro and Xbox one x on them. So many variables...

Its not like that at all though. The differences between X and Pro isn’t minimal like it is between most multi platform games. The botched checkerboarding in the Pro version has resulted in a seriously sub par experience which is really blurry and muddy. It is something that rockstar should be working on as a priority. If they fix their code then Pro should look a lot closer to the X than it does now, it’s not a lack of power in the pro that’s an issue because other multi platform games look a lot closer than the versions of rdr do currently. Rockstar has botched the PS4 pro version as it stands, but it ought to be fixable.
28th Oct 2018

The truth is that for major publishers, they have to give parity to both consoles. So while the X may well be 'faster' and more powerful, games have to run basically the same on both. You may see minor differences but PS4 games were slightly weakened so that original XB1 consoles could keep up and the reverse is true now for any multi-platform games.

They only really put their foot down on exclusives.
28th Oct 2018

if 'wrong' could be a person, it would be you

So horses are slower than cars? Got it.

Is this the sequel to Shawshank Redemption ?

Probably sounds like a rocket taking off playing this on a PS4. Get an X.

There are two different types of fan in the PS4 - Delta fans are the ones that sound like a rocket, Nidec fans are significantly quieter - so it depends on what you get. I used to have a fat PS4 with a Delta fan and it was just distractingly loud until I swapped it for a Nidec fan myself. The Pros still have the two types of fan, where one is louder, but nowhere near as loud as the fat. It's worth noting that these RDR2 console bundles include a new revision of PS4 Pro which is quieter still, and is supposed to not suffer from the coil whine issue that some have.

Yeah, I think he was referring to exclusives. If you look at the list of games that you can only play on each console, then the Xbox's list is pretty short - basically Halo and Sunset Overdrive, and maybe Forza and Recore unless you count the fact that you can also get them on PC - whereas the PS4 has a much longer list and it's a pretty strong lineup. But there's no doubt the Xbox One X has that bit of extra power which makes it easier for it to hit 4K 60fps, making it better for third party games.

So basically, if you've got both, you're better off getting games on the X where possible; if you've got an X you've got the power but are missing out on the PS4's exclusives, but if you've got a PS4 Pro you're just missing out on a few Microsoft games plus a few extra pixels and FPS here and there - except, apparently, with RDR2, which sounds like it has a bad upscaling algorithm which hopefully can be improved with a patch.
28th Oct 2018

I think the real truth is the slow AMD CPU from 2012 designed for low powered laptops. The clock speed was upped in the Pro and X, but it’s not even as good as a 970 I7 lol. It’s the biggest thing holding the consoles back right now, why you see the Xbox One X delivering 30 FPS when a PC could do 60 with a similar GPU.
28th Oct 2018

Yep, and that's why I'd get a PS4 Pro if I was going to get either.

Anyway, I love how every one of these deals turns into a PS4 Pro versus Xbox One X debate. Lets face, what we need is a PC version and then this game can be enjoyed properly, both will suck in comparison.