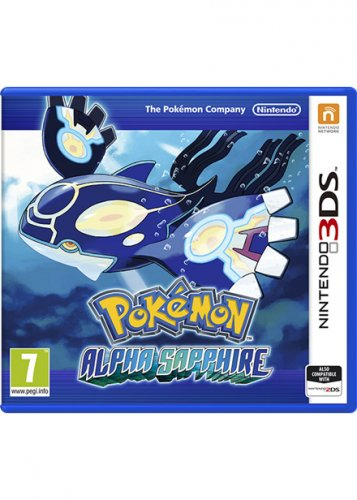 Pokémon Omega Ruby and Pokémon Alpha Sapphire are a fresh take on Pokémon Ruby and Pokemon Sapphire, which launched in 2003 and were fan-favourite hits on the Game Boy Advance system. The new titles promise to take players through a dramatic story within a spectacular new world, as they collect, battle, and trade Pokémon while trying to stop a shadowy group with plans to alter the Hoenn region forever...
Key features:
Embark on a new adventure through the Hoenn region, an area rich in natural beauty, that contains a cave that shows a scene described in legends.
Experience the awe of Primal Reversion, a new, extremely powerful transformation undergone by Legendary Pokémon Groudon and Kyogre.
Get even closer to solving the mysteries of Mega Evolution as more Pokémon gain this powerful ability.
Primal Reversion transforms popular Legendary Pokémon into Primal Groudon and Primal Kyogre
With Pokémon Omega Ruby and Pokémon Alpha Sapphire, exclusively for Nintendo 3DS and 2DS systems, Pokémon fans will collect, battle, and trade Pokémon as they travel throughout the rich natural beauty of the Hoenn region.
The Pokémon featured on the game packages are in fact Primal Groudon and Primal Kyogre, newly revealed transformations of the Legendary Pokémon Groudon and Kyogre. These two extremely powerful Pokémon clashed in an epic battle that once sent Groudon into a long slumber within the magma beneath the planet's crust and drove Kyogre into a deep sleep at the bottom of the ocean floor. The awesome transformation is a result of Primal Reversion, when Groudon and Kyogre reclaim their original power from nature's energy and obtain even greater power than they already have. The power within Primal Reversion is still being discovered, as well as what connection may lie between Primal Reversion and Mega Evolution.
More details about Primal Groudon and Primal Kyogre:
Primal Groudon is brimming with energy, which pours from its body as magma. The magma burns at such an extreme temperature that its body is always shimmering ruby red from the haze of its heat, giving off light in the darkness. Through Primal Reversion, Primal Groudon becomes much larger and adds Fire type to its Ground type, raising the power of Fire-type moves it can learn. Primal Reversion also greatly boosts Primal Groudon's Attack. Its ability may get a boost during this epic transformation, too.
Primal Kyogre, a Water-type Pokémon, is awash with energy that spills from its body as seawater. Its blue skin shines like a sapphire and is half-translucent like the sea. Primal Reversion greatly boosts Primal Kyogre's Special Attack. Its ability also seems to get a boost, although this information cannot yet be confirmed. Primal Kyogre is massive, growing to be more than twice Kyogre's size.
Pokémon Omega Ruby and Pokémon Alpha Sapphire will explore the mystery of Mega Evolution even further, a powerful Evolution that only occurs to some Pokémon during battle. For Mega Evolution to take place, Trainers need a Key Stone to resonate with a Mega Stone held by a Pokémon during battle. 28 Mega Stones have been identified since they were introduced in Pokémon X and Pokémon Y, but it is said there are still more Mega Stones to be discovered in the Hoenn region.
PostTweetShare Share with WhatsApp Share with Messenger
Community Updates
Base.com DealsBase.com discount code
New Comment SubscribeSave for later
24 Comments
Post a comment