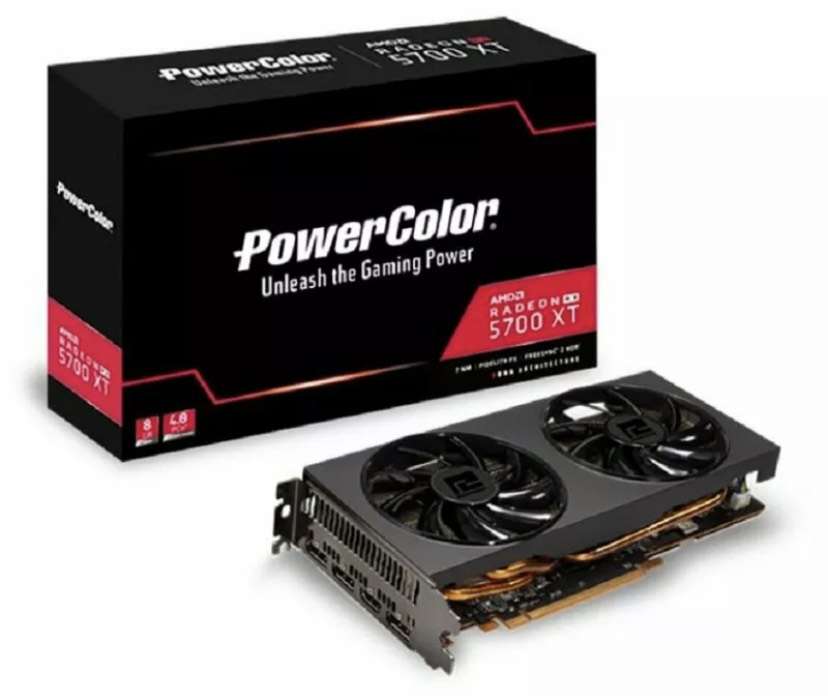 Can’t find many reviews on this specific card.. if anyone has this card or can shed some light, comment away

Who cares? People loved it. People loved the gtx 260. I'm comparing them because they're two cards I've directly compared to the 5700, and they're louder, yet nobody moaned about them them on launch. Actually, they got stellar reviews.

It just shows our notion of noise has become ridiculous. It's marketing and manipulation, in my opinion.
43 Comments
8th Jan
Good price.
8th Jan
Anyone got thermals?
8th Jan
I like that is a genuine 2 slot card, most seem to be larger.
8th Jan
I have this card. Not a very good overclocker but is quiet
8th Jan
This card is equivalent to the Sapphire Pulse, as in, it's far more than you'll need for good stock performance. Great 5700, 3 months ago this was the price of a 2060, things are going well!
8th Jan

Look for the GamersNexus review.

Short answer, it's comparable to, and in some cases, better than all the other 'good' cards.
8th Jan

The one for the red devil or the non xt version. Neither are this card
8th Jan
Got this card and tested it extensively and its loud as hell. Compared to my blower style Asus RX 5700 this is louder.

This particular card has a smaller heatsink and smaller 90mm fans compared to the red dragon or red devil which are much better cards.

If you have a noisy pc, then go for this as you wont notice this over the noise. If you have a after market cpu cooler and good silent fans then this is super audible. Performance wise, its about 10% faster than my RX 5700.
8th Jan
I have the reference 5700XT as I love the design goes well with the colour scheme.. and undervolted to 1900mhz. nearly same performance for far better thermals. I wouldn't hesitate to buy a 5700XT Best card on the market for performance to £. plays any game at 1440p max settings 60fps min. 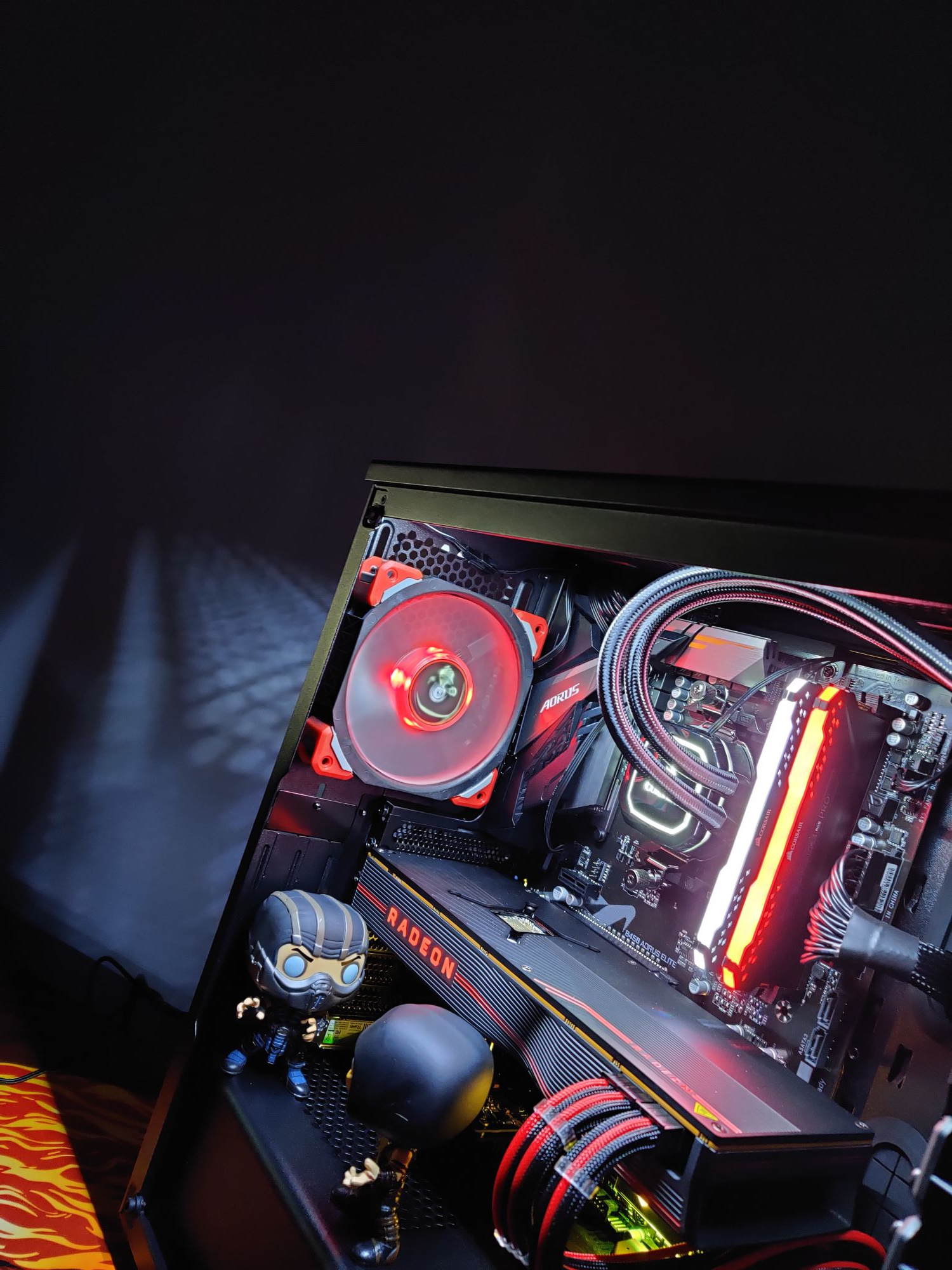 Same, people talk nonsense about the noise levels, I've owned GPUs for ten years (most of them mid-top end nvidia) and the 5700XT has been just as good as any of them. Quieter than my 8800GTX from way back, and my 260, which everyone was fine with at the time.
8th Jan
I bought a reference model and was worried about the noise levels. But i honestly dont get the complaints, its not loud at all to me. My rx 580 red dragon was so much louder and that is a 2 fan card. People must just want silence. I usually wear headphones too so then i definitely cant hear anything
8th Jan

NO this model and the blowers are NOISY.. thats a fact.. saying otherwise just shows youre in denial at your bad purchase.

5700 and 5700xt should of been great but once again fell short on heat and noise along with bad drivers :\

Do you think nvidia prices wouldnt plummet if they were any good?

I remember when the 7970 days when they finally got good drivers and destroyed everything nvidia had so they were forced to drop prices and release the 780 early. Theres never been anything from AMD to do this since then, they are all hot and noisy along with bad drivers :\
8th Jan

I'm not in denial lol, the sound output in dB of a 5700 XT blower in the gamersnexus test is less than an 8800GTX and a GTX 260, two of the most well reviewed mid range cards of all time.

People were fine with it back then, but marketing has made them believe 40dB is loud. I don't think the human ear has evolved in 10 years.
8th Jan

Dude the 8800gtx is ANCIENT!!!!!!!!!! why the hell are you comparing it to this lol? i had a 9800gx2 and it wasnt as noisy as the 5700xt blower or the one on this thread. For a modern card the hear and noise levels are not acceptable. Now keep comparing your card to a card that came out in the dark ages lol :\
8th Jan

That's an under clock
8th Jan

Who cares? People loved it. People loved the gtx 260. I'm comparing them because they're two cards I've directly compared to the 5700, and they're louder, yet nobody moaned about them them on launch. Actually, they got stellar reviews.

It just shows our notion of noise has become ridiculous. It's marketing and manipulation, in my opinion.
8th Jan

That's an under clock

No the 8800 blower may have been noisy not the ab... and they loved the 8800 because it was one of the biggest leaps graphics card history. No one loved the 260 its a low end card.. i had a 285 and it wasnt noisy :\ all your facts are messed up. The 5700 are the smallest chips around yet produce more heat and noise than nvidias... now think of this year when nvidia release their new cards theyll just destroy amd yet again :\ half the power consumption of the 2000 series means they will be super cool and super quiet but we have to wait and see if its true.

Youre just nitpicking the noisest OLD cards and comparing them to a modern GPU, theres no excuse and its kinda dumb to do that
8th Jan

My facts aren't messed up

But sure, if you think a 40dB card is too loud by all means, most of us don't, and most of us can't hear it over speakers or headphoens - because 40dB is inaubible in those cases.
8th Jan
Do you guys not use headphones/earphones when on PC?

My PS4 is louder than my pc and my case doesn't have any dampers and has 3 fans running at full.
8th Jan

Yes and they are ancient tech in comparison. 5700xt is 7nm LOL are you for real? Enjoy the sound of the your GPU while i game in silence...
8th Jan

I'll also enjoy gaming in silence, my GPU rarely even hits 40dB, which is quieter than ambient sounds in a house.
8th Jan

Must be terrible games not to have any sound. You should turn up the volume mate.
8th Jan

Have you tried a blower yet? I never tried one thinking exactly the same until I tried the Reference RX5700 and its a completely different story. On load, the fans go to 39% and that is about 39db right at the front of the PC case using a S10 sound meter. But this is with a 50mV undervolt which keeps the clocks very stable. Yes, I lose 1-2 fps but with 80fps at 1440p, it doesnt matter. Ata distance of 1 meter from the case, I can hear a hum and that is all during intense gaming sessions where honestly you wont care about a hum in the middle of a gun fight

I tried this dual fan card in December and applied a similar undervolt to get it down to a reasonable level but even then it was about 44db at the exact same spot, so returned it. Also, because the fans are small and the heatsink is lighter, it doesn't dissipate heat very well and just ramps up the fan to about 80% which was too noisy.

I have not tried the Red Dragon which has a 100mm fan and neither the Red Devil, but I am completely happy with the reference design as long as you know how to move a slider to the left to undervolt a little. Yes, I may be losing 3-4 fps over a Red Devil, but in the grand scheme of things, its so insignificant, you wont even notice I play on a 75Hz 1440p monitor, so those with the expensive 144Hz 1440p monitors may need those 4fps more than I do
8th Jan

They have some punctuation though. Give it a try. HUKD does not charge by character mate.
8th Jan
ive had this card since november. no problem with noise for me. my 3800x cpu on stock cooler is far more noisy.
the only issue ive had is with drivers- ghost recon breakpoint crashes pc after a few minutes. hopefully an update will fix this.
8th Jan

mine reaches about 70 degrees when gaming. its in a phanteks p300 case.
8th Jan

Well you can undervolt it also which is when you change the voltage, not sure if you done both or just clocks
8th Jan
I'm going to throw this out there. I have the RX 580 Red Dragon which is a previous gen of this style and basically a similar cooler design. It is so loud. The fan profile on Powercolour twin fan cards is really aggressive as the heatsink is small and built to a budget. They are very loud and fans will hit 1900rpm under load. Great price though.
8th Jan
No ideas why people waste there time responding to trolls who've never even used 95% of the products they bash, and just regurgitate something they read on a forum or Reddit somewhere on the internet .

This card is great, in fact I'd go so far to say as in terms of price and performance to dB made that you cannot beat this with any other card on the market, regardless of the manufacturer or GPU that is soldered on to the PCB.
8th Jan

My bad I did under volt and changed the clocks down to 1900hmz too that's what i meant to say
8th Jan
Great deal.
8th Jan