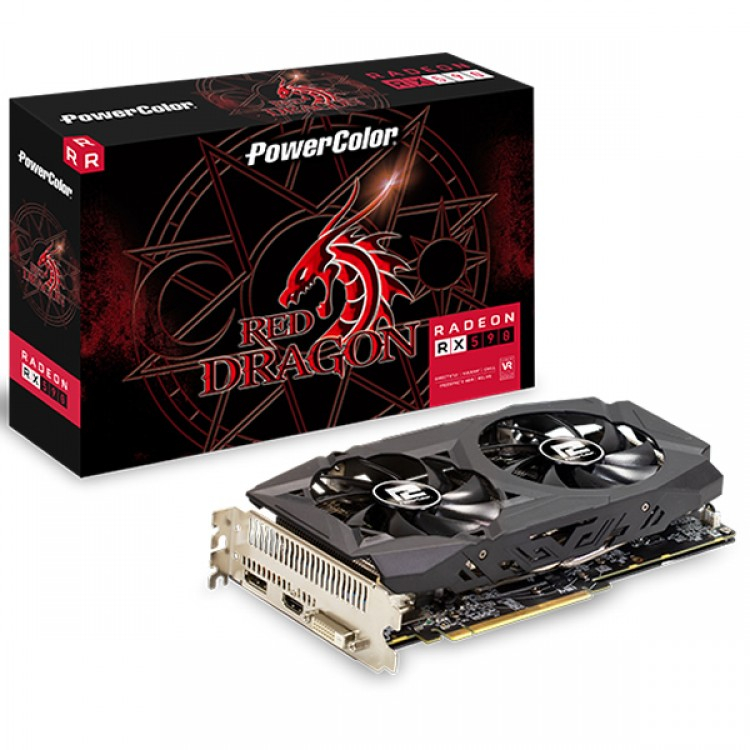 Now it’s easier than ever to connect and use an external Radeon™ graphics card. With AMD XConnect™ technology, external GPU enclosures configured with Radeon™ Graphics can easily connect and disconnect to a compatible ultrathin notebook or 2-in-1 over Thunderbolt™ 31 at any time, just like a USB flash drive-a first for external GPUs!

AMD FreeSync™ technology puts an end to choppy gameplay and broken frames with fluid, artifact-free, performance at virtually any framerate.

A power-saving feature that dynamically regulates frame rate based on your in-game movements. Radeon™ Chill can improve power efficiency and can lower temperatures for supported products and games when enabled through Radeon™ Settings.


Specification:
- Boost clock: 1545MHz
- Memory clock: 8000MHz
- Memory interface: 256-bit
- Stream processors: 2304
- Warranty: 3yr
Overclockers DealsOverclockers voucher codes
If you click through or buy, retailers may pay hotukdeals some money, but this never affects which deals get posted. Find more info in our FAQs and About Us page.
New Comment Subscribe Save for later
29 Comments
12th Feb
I'm hoping for a good Doom Eternal/GPU bundle when that releases next month.
12th Feb
Good find i'm actually tempted to get this
12th Feb
How would this be for VR ? just want a average card
12th Feb

How would this be for VR ? just want a average card

Would do ok. What VR headset?
You would have to turn setting right down on the more complex games. Perfect for the likes of Rhythm / fitness / cartoony games. Would probably struggle a bit with the likes of Asgard’s Wrath (although it may be ok on low settings - I’ve played on a 1070 and 5700 and it was not perfectly stutter free on either at the higher settings, but that may be more due to Oculus link Beta. I’ve not tried on a purely PC based headset.
12th Feb

was thinking along the lines of a cheap Oculus Rift, really just want to get into VR at a ok price point, just need to buy the right card :_)
13th Feb

As usual, the more you pay the better your experience will be. If there is a choice for you, my advice would be to get an Oculus Quest and suitable USB cable rather than the Rift.
I use mine wirelessly as a quest more than plugged in to the PC as a Rift due to the freedom of movement you get even though the graphics are not as good. However the S is more comfortable to wear than the Quest.
If you are looking at a second hand Rift rather than the Rift S, the S is a big step forward due to the comfort and also that it has no need for external sensors. The sharpness of the graphics are better too in the S and also the Quest.
In terms of graphics, just get what is in your budget.
I’d say that this deal is the best option for around &150, the 1660Super is the best deal at around £200. The RX5600XT seems to be the sweet spot at around £250 (but it seems AMD messed up a bit and some early cards need an easy bios flash for a big performance boost). I don’t know how many of those actually got to market though.
14th Feb

Are you advising a second hand Oculus Quest or new?

I’m in a similar position and was thinking of a budget VR setup to play games like Elite Dangerous.
14th Feb
Crazy to see how the 590 is better by 10% compared to 580 for £20~ difference.

Good question.
All depends on budget I guess and some people wouldn’t like the thought of another persons old sweat on the foam / material face mask. (Although you could get a giver).
I think my point is that with the quest you get the best of both worlds and I do enjoy being free of cables more than I thought.
But I also keep thinking that when I had the rift S it was more comfortable for long periods.
There is a different answer to everyone’s situation. If you could save £100 by buying 2nd hand and this would give you more for a new graphics card, it’s worth thinking about.
CEX for example do give 1 year (2 in some instances ?) warranty.
One thing on a second had quest, I wear glasses and there is an add on for the quest to space the headset off your face a little more. I you wear glasses make sure that is included in the second hand set - YouTube to see what it looks like.
Edited by: "iceburglettuce" 14th Feb
14th Feb
Be sure to order a new foam attachment for your face though or a vr cover! People sweat buckets when using this hardware! No way you'd catch me using someone's secondhand foam cover
14th Feb

How you all think, would that be better than SLI GTX 980?

Putting that SLI is pretty much dead aside, the RX590 is while may be faster than a single 980, it wouldn't be by much.

it wouldn't be by much

Aye, 5% is not worth the faff of upgrading.

So Mariusz_Sobko, given that GTX 980s (decent cards in decent condition) sell for about £150ish on eBay at the minute you'd be better of selling both and getting a Radeon RX 5700.

Single cards have always been better than SLI/CrossFire and that's especially true since about 2018.
Edited by: "ollie87" 14th Feb
14th Feb

Are they boxed and in good condition? If so sell them and buy a single RX 5700... althought might be better with a RTX 2060 with that CPU given AMDs driver overhead (strangles CPUs).
14th Feb
will this outperform Asus 980ti?

As covered above, no. It barely outperforms the 980, the Ti version is a lot faster.
14th Feb

I have this exact rx 590 and 980 Ti as well, 980 Ti is way faster and you can easily play most of the games at 1440p resolution.
15th Feb
This rx 590 is loud and hot and it has a massive coil whine. I have about 20 different gpus for benchmarks purposes and this card has the worst coil whine I ever heard.
16th Feb

EVGA GeForce GTX 980 Ti SC+ GAMING ACX 2.0+
I made a gameplay video using this card and it still performs very well even in 2020, nearly 5 years after the release youtube.com/wat…x=5
17th Feb