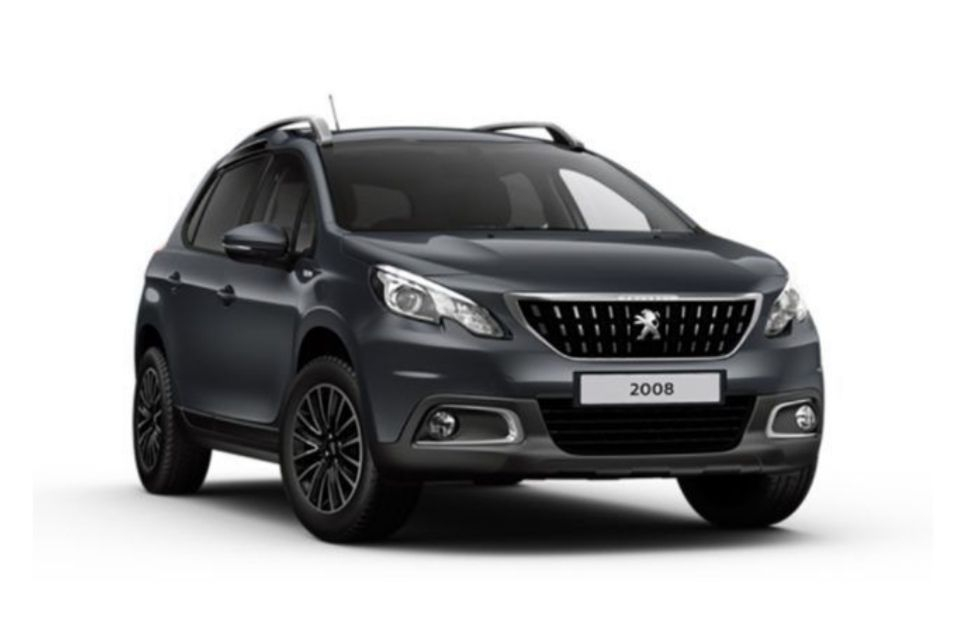 Another Peugeot deal from Eden...

Features of the Signature specification include:


All this as standard on these delivery mileage 2008's. 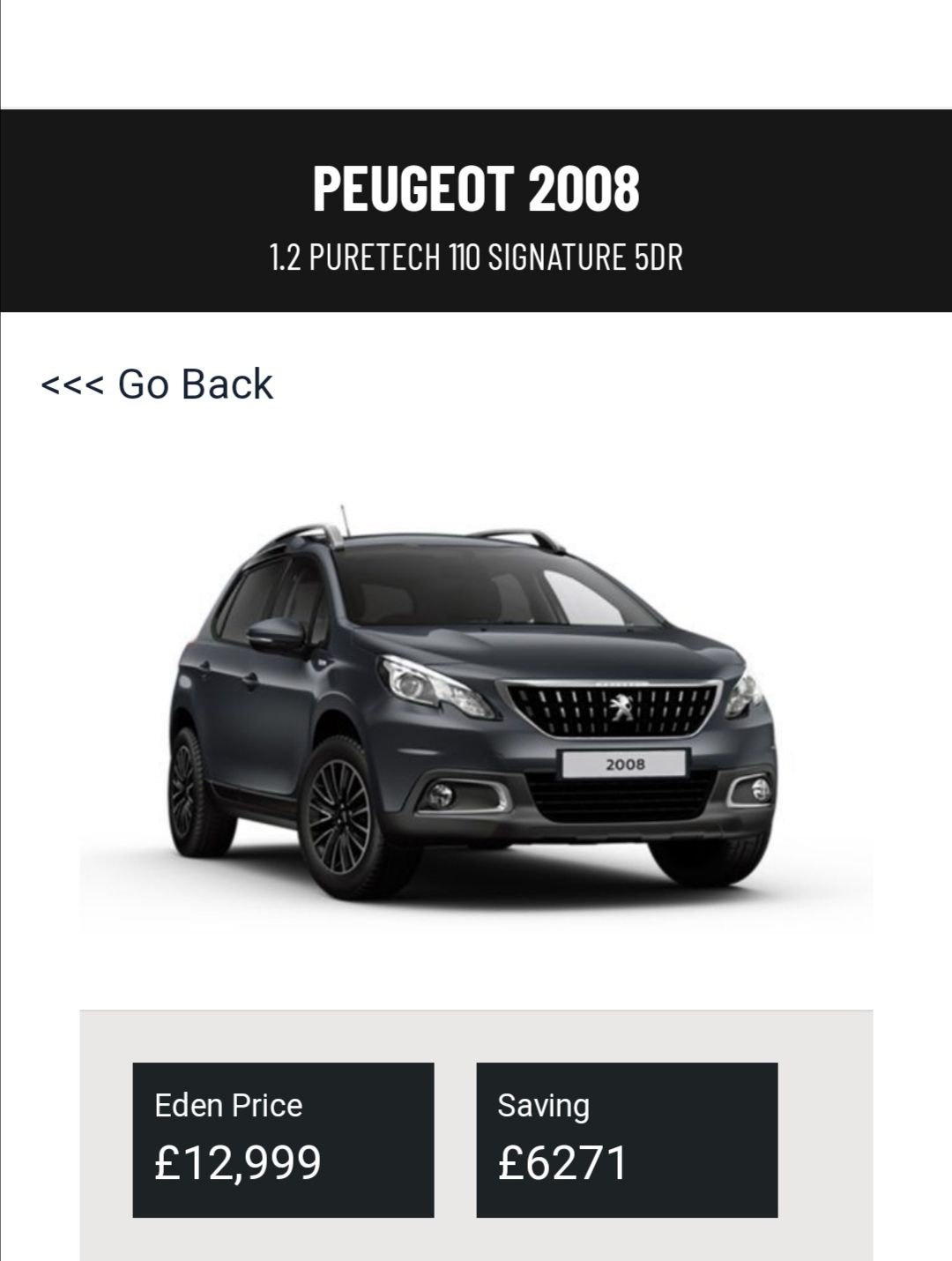 Full spec here:
Featured specification
PostTweetShare Share with WhatsApp Share with Messenger
Community Updates
Eden Motor Group Deals
If you click through or buy, retailers may pay hotukdeals some money, but this never affects which deals get posted. Find more info in our FAQs and About Us page.
New Comment Subscribe Save for later
Top comments
13th Jan

Thought I would look at your other comments and by god you are a record player looking at your comments. What’s caused this superiority or hatred?
14th Jan

Take a look at honest John real world mpg and you'll find the pretty much every automatic is less fuel efficient than it's manual equivalent, period

They are also more expensive upfront and if they fail, which is far more common than manual gearboxes, they are invariably very expensive to repair.
13th Jan

I prefer manual. Get both to drive at work. And I prefer manual each time. Maybe I am just a really good driver so appreciate it over an auto
13th Jan

It's not hatred or superiority, just crass ignorance.
253 Comments
13th Jan
Heat!
13th Jan
Yep, heat from me too!! ‌

This is a left hand drive image!

Manual cars in the 21st century. How backward UK is.
13th Jan
A classic example of why we are buying bigger less efficient cars. A great deal for the purse but not the environment
13th Jan

I prefer manual. Get both to drive at work. And I prefer manual each time. Maybe I am just a really good driver so appreciate it over an auto
13th Jan

I have the EAT6 gearbox, It’s great,
Smooth and effortless through the gear changing.
Now they use an EAT8 speed if my memory serves me.
13th Jan

Nope, a cheapskate.
Would you pay more for a manual?

Software is more efficient at changing gears than humans.
Tax manuals as the are less efficient nowadays, and prone to human performance.
Knee issues cost the NHS with old age.
Less safe as often only one hand is on a wheel, else let people eat whilst driving.
Edited by: "Common.Sense" 13th Jan
13th Jan

Can you drive a manual
13th Jan

Can you drive a manual

Legally, yes. I passed on a manual many moons ago.
Then I thought it was so backward and never driven one since.
When I visited USA 98% new cars were automatic.
They laughed when I said Brits buy manual.
They thought UK was a third world backward country.
I agreed and said most claim they prefer manual and are deluded that they are more fuel efficient.
(This was the case years ago). In reality they say so as they are cheapskates.
They would pay less if they had to press a button to trigger brake lights (so they were not automatic) and claim it is more fun.
We had a good laugh!

In USA many manuals cost more than automatic!

I said may be some Brits buy a television without a remote control as it is more fun!
They thought Brits do not embrace technological advances.
Edited by: "Common.Sense" 13th Jan
13th Jan

Thought I would look at your other comments and by god you are a record player looking at your comments. What’s caused this superiority or hatred?
13th Jan

Nothing. It is is just comical to read, "I prefer a manual".
More respect for, "I am a cheapskate so do not want to pay for automatic!"
There is not hatred or superiority. Honesty is respected.
Sorry, just bored tonight.
Edited by: "Common.Sense" 13th Jan
13th Jan
Great price
13th Jan

It's not hatred or superiority, just crass ignorance.
13th Jan

This problem was solved in model 308 upwards.

friend / neighbour has a 2008 the electric opening/closing tailgate / boot has been back to the garage 3 times since she bought it. She's also had problems with headlights and the stereo. Face it, Peugeot have no idea how to do electronics, as bad as Land Rover.

They're reliable though, they'll always start, and always get you from A to B ... but you're going to have electrical faults.
14th Jan

Doesn't make sense. BMW made a manual M3 - those are not cheap. It has nothing to do with being a cheap skate but rather preference.
14th Jan

Take a look at honest John real world mpg and you'll find the pretty much every automatic is less fuel efficient than it's manual equivalent, period

They are also more expensive upfront and if they fail, which is far more common than manual gearboxes, they are invariably very expensive to repair.
14th Jan

The guy spouts off about manual vs auto gearboxes on lots of the car deals. Yawn!
Edited by: "waby1234" 14th Jan
14th Jan

Pulling out to overtake, putting your foot down and getting no power until the gearbox decides to kickdown is a horrible feeling. I can pre-emptively choose the right gear for a bend or roundabout and not have the awkwardness of the automatic being in the wrong gear at the wrong time. On hilly roads I can ensure that I've always got the power I need for the incline and on descents I can minimise wear on my breakpads by keeping the car in a low gear. In the snow I can set off in second gear and actually move off instead of spinning the wheels in first and making things worse.

Americans drive automatics because most of their driving is done on flat roads filled with stop-start junctions (because they're too distrustful of roundabouts) and turns that are only ever in multiples of 90 degrees
14th Jan
Also our American cousins couldn't give a monkey about fuel economy as their fuel is too cheap as it is hardly taxed, if at all.
14th Jan

Base paint colour.. Not metallic

Metallic paint is listed as payable option under the Eden deal, where do you see it's included?
14th Jan

Here's why manual transmissions used to be the more fuel-efficient choice: When you come to a stop in a manual transmission-equipped car, you have to select the neutral gear, either by shifting or by depressing the clutch. If you don't, you'll stall (and everyone around will laugh at the moron who doesn't know how to drive a manual). By contrast, an automatic transmission stays in gear when you stop. While that's great for your left leg in stop-and-go traffic, it's bad for mileage at lower speeds.

Time after time this is repeated.
Humans are so useless compared to software they seldom change gears as efficiently as humans, so efficiency is lowered more for manuals.

autos are for lazy people! i have had both and dont bother me in price difference but would pick a manual any day, they are more fun to drive and race around

fuel eco dont bother me, it cost what it costs at the end of the day, americas have autos because most of there roads are straight and boring so its easier/lazy for them as they drive alot, maybe get out the easy/lazy way of driving and have some fun around the non straight roads of england 🤪
14th Jan

That spanish guy must have really upset you x