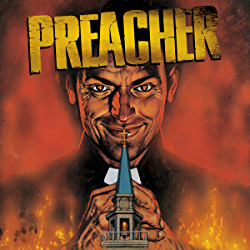 Well-regarded comic book/graphic novel. Matches the historical low for most of these volumes.

Merging with a bizarre spiritual force called Genesis, Texan Preacher Jesse Custer becomes completely disillusioned with the beliefs that he had dedicated his entire life to. Now possessing the power of "the word," an ability to make people do whatever he utters, Custer begins a violent and riotous journey across the country. Joined by his gun-toting girlfriend Tulip and the hard drinking Irish vampire Cassidy, the Preacher loses faith in both man and God as he witnesses dark atrocities and improbable calamities during his exploration of America.
PostTweetShare Share with WhatsApp Share with Messenger
Community Updates
Amazon DealsAmazon discount code
If you click through or buy, retailers may pay hotukdeals some money, but this never affects which deals get posted. Find more info in our FAQs and About Us page.
New Comment Subscribe Save for later
7 Comments
22nd Dec 2019
If you think the TV series is messed up then think again, this is all sorts of crazy
22nd Dec 2019
This show (and comic) makes no sense...
It's such a pile of ‌ ‌
22nd Dec 2019
"Hey Sheriff, ****ed your wife last night!"
22nd Dec 2019
Or, if you have a Comixology account, they are only £2.99 each
Link: comixology.co.uk/sea…ONS
22nd Dec 2019
Book One available with Prime Reading and books Three and Four with Kindle Unlimited (plus an old book Two which overlaps with the new Book One).
22nd Dec 2019
Fantastic art work by Steve Dillon (R.I.P.)
As alfie66 notes, it I see all kinda messed up, but I reckon more comprehensible and a little less sexualised than the TV series. If you like “The Boys” (comic & TV show), then chances are you’ll already have this...
23rd Dec 2019
Great series, loved all of it.