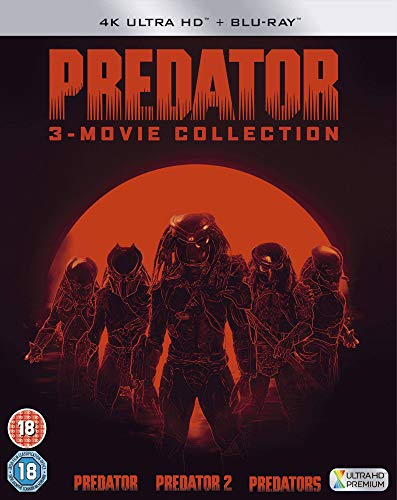 Note: The scores above are averages for the three films in this set, averages that are a bit hard to "calculate" since the first film received two completely different releases. Fans or interested consumers are encouraged to click on the individual review links for the 4K UHD versions, as well as parse our previously published reviews of the original 1080p Blu-ray versions (links included in the 4K UHD reviews) to gain a more thorough understanding of what's been out there already and what is in store for 4K UHD aficionados. The score for the supplements is indicative of the fact that the 4K UHD discs only include the commentary tracks.

Some may wonder if Fox is trying to atone for past Blu-ray sins with the new 4K UHD releases of Predator 4K, Predator 2 4K and Predators 4K . And while there may indeed be at least a bit of salvation with regard to the first Predator film's 4K release (in terms of previous perceived botched outings), the cold, hard fact is that Fox is probably just understandably cross promoting its new kinda sorta reboot of the franchise, The Predator, due in just a little over a month as this review is being published. Predator appeared (well, the film, anyway) in 1987 and quickly entered the annals of audience favorites, even if those curmudgeonly critics found the typical bugaboos like plot and character development questionable at times. What is kind of interesting in terms of this particular supervillain is what Alfred Hitchcock once described as the difference between surprise and suspense. He used the well remembered example of two people talking with a bomb suddenly going off, which he likened to a surprise. But Hitchcock then asked folks to wonder how they'd react if they already knew a bomb was placed in the vicinity before the people arrived to begin their chat. That's suspense, and in a way, there's a visual analog of sorts in that Predator relies on the conceit of a (largely) invisible monster that the viewer nonetheless knows is there, but which can't be localized. Ironically, when the Predator does "show up" (as far as that goes), that leads to some definite surprises. Perhaps predictably, the nascent Predator franchise suffered a pretty significant "sophomore slump" with Predator 2, and not necessarily just because Ah-nold wasn't involved and the location had been changed from an almost inherently spooky jungle. That failure probably accounts for the fact that it took decades for the "next" Predator film to appear, 2010's Predators, an outing which some fans may have felt seemed deliberately designed to evoke another iconic science fiction franchise, Alien: 6 Film Collection.
PostTweetShare Share with WhatsApp Share with Messenger
Community Updates
Top comments
16 Comments
Post a comment