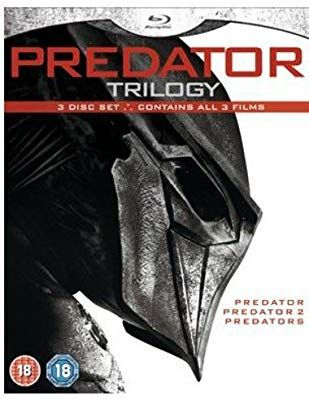 Product Description
Predator
Recruited by the CIA to rescue hostages held by guerrilla fighters in a Central American country, Arnold Schwarzenegger and his men encounter an enemy unimaginably more deadly than any on Earth--because the Predator is not of this Earth.

Predator 2
Danny Glover stars as a lieutenant who mistakenly concludes that mangled bodies found by the police are the work of feuding gangs. Instead, he finds himself confronting a savage alien who has come from a distant world to hunt humans for sport. Gary Busey and Ruben Blades co-star in this suspense-packed, high-tech thriller sequel.

Predators
Adrien Brody stars as Royce, a mercenary who reluctantly leads a group of elite warriors in a mysterious mission on an alien planet. Except for a disgraced physician, they are all cold-blooded killers--mercenaries, mobsters, convicts and death squad members--human predators. But when they begin to be systematically hunted and eliminated by an unimaginably horrifying alien, it becomes clear that suddenly, they are the prey
PostTweetShare Share with WhatsApp Share with Messenger
Community Updates
Amazon DealsAmazon discount code
New Comment Subscribe Save for later
2 Comments
21st Jan
Is this the remastered editions?
21st Jan

Is this the remastered editions?

This is the extremely dodgy PREDATOR Ultimate Hunter release disc, with the DNR-ed transfer. The PREDATOR 2 disc is unremarkable and the PREDATORS disc is excellent. They're all remastered in the UHD set.