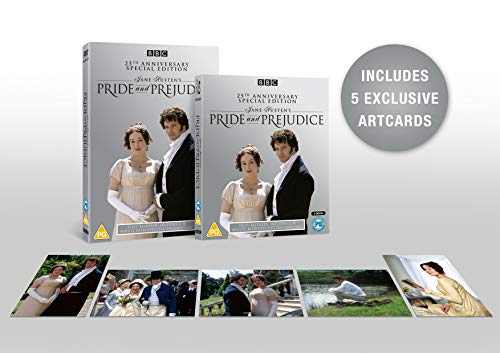 Experience the BBC BAFTA and Emmy Award-winning series Pride and Prejudice like never before, as the magic of period drama is rekindled with state of the art technology.

Returning to the original film negatives, this stunning adaptation of Jane Austen’s classic novel has been painstakingly restored frame-by-frame to reveal the sumptuous costume and detail that makes Austen’s world so enchanting. With its outstanding performances and stunning visuals, Pride and Prejudice plunges the viewer into a 19th century world of grand country estates, eligible bachelors, and exquisite soirées.

Elizabeth Bennett, a spirited and independent young woman, is the subject of her mother’s obsessive goal to marry off her five daughters to the wealthiest gentlemen available. But Mrs Bennett’s plan is compromised with the arrival of the proud and enigmatic Mr Darcy, as he and Lizzie embark on one of the most famous and compelling romances in history. Adapted by acclaimed screenplay writer Andrew Davies, Pride and Prejudice stars the hugely popular Colin Firth, Jennifer Ehle, Alison Steadman, Julia Sawalha along with many other excellent performers.