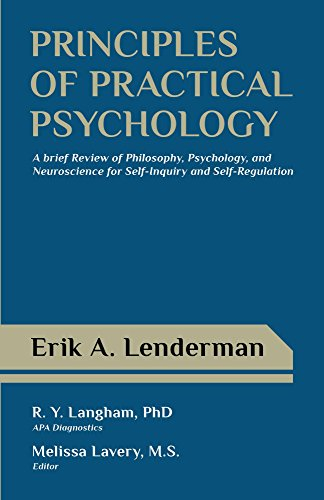 This is designed to provide the reader with a brief review of philosophy, psychology, and neuroscience for self-inquiry and self-regulation. This work ranges from Socrates to Plato, Aristotle, Plotinus, the Medieval Ages of Europe, the Renaissance, Machiavelli, Locke, Rousseau, Descartes, Hume, Kant, Hegel, Popper, and Whitehead.

This will also review the origin of the field of 20th century psychology, which includes Freud, Jung, Reich, Assagioli, Pavlov, Skinner, Rogers, Maslow, Gardner, Piaget, Wilber, and others. The practical applications will include a review of neuroscience and the modern technologies used for mapping and adjusting activity within the central nervous system. Both endogenous and exogenous methods for self-inquiry and self-regulation will be reviewed in order to shape thought, physiology, attention, and behavior. This book is designed for readers who are interested in an introduction to the field of philosophy, psychology, neuroscience, and the practical applications of these fields of inquiry.


The Practical Applications section on State Management and the Hierarchy of Needs have been strongly influenced by the work of Dr. Abraham Maslow and Anthony Robbins via Robbins Research International.

I have it already.Have some heat though

Haha. Yeah, I already have this one, too. Looks promising. (I’m afraid to look at my Kindle downloads... sooo many books, so little time.)
6th Aug

I have it already.Have some heat though

Check your Kindle downloads, on your Amazone Account, my friend. I've just checked mine and there's an update for this very book available.
6th Aug

Check your Kindle downloads, on your Amazone Account, my friend. I've just checked mine and there's an update for this very book available.
6th Aug
‌ ‌ Thank you for posting this, DealDroid. Like others here, I've already got the eBook but on checking, there's an update available. ‌ ‌
6th Aug
Massive saving (£37.72 off!) on this one. Purchased.

Many thanks.
6th Aug

Thank you, I will
7th Aug
Thanks DealDroid 🐬