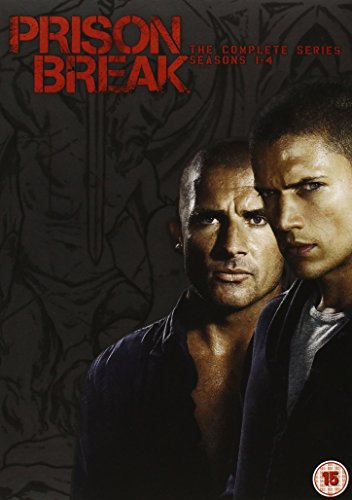 A fab series, one of the best escape heist series.

If you are a first time buyer, use the code WELCOME10 to get it for the price mentioned.

NBP based on MusicMagpie

Went downhill quite quickly in Season 5 so the best part(s) are here.

Description
Season 1
Season one of Prison Break is great television. Here's the set-up. Lincoln Burrows (Dominic Purcell) is framed and wrongfully convicted for assassinating the Vice President's brother. Lincoln's brother Michael Scofield (Wentworth Miller), who just happens to have designed Illinois' Fox River Penitentiary where Lincoln is on death row, hatches an elaborate escape plan. Michael's plan involves getting himself incarcerated in Fox River and smuggling the prison's blueprints by having them hidden in tattoos that cover his entire torso. Once inside, Michael must form alliances with a rogue's gallery of felons with their own sometimes unsavory motives. Meanwhile, on the outside, Lincoln's lawyer and one-time girlfriend Veronica Donovan (Robin Tunney), pursued by Secret Service agents, attempts to unravel the conspiracy that sent her man to the slammer.

Season 2
Prison Break season two simply shouldn’t work. Having effectively concluded the story arc at the end of season one, there was real cynicism as to whether the pace, energy and excitement could possibly transfer to more episodes.

Yet that’s overlooking the sheer presence of the fascinating, twisted bunch of characters we got to know, love, hate and jeer at throughout the show’s maiden season. And in many ways, the second series of Prison Break evolves into a logical extension. If you’ve not seen series one, look away now.

Season 3
It was always going to be a challenge to move a show whose premise effectively fitted comfortably inside a single series to a third season. And so perhaps inevitably, Prison Break moves the action back to the slammer, this time in Panama. It proves to be a wise choice, as, while plausibility has long since been thrown out of the window, it’s a more natural setting for the show.

Prison Break still follows brothers Lincoln and Michael Burrows, but this time there’s a far tougher prison that needs to be broken out of. It’s a little less claustrophobic than the last one, but more dangerous. And along with the usual terrific supporting cast of characters, the tension, twists and violence that underpin the show are all very much present and correct.

Season 4
In retrospect, it’s amazing that Prison Break got this far. The original concept of the show surely demanded just a single season, but such was the success that it enjoyed, that further runs followed. It’s to the credit of the show’s creators that it managed to make this work, too, right down to the agreeable fourth and final season.

Thus, this final season of Prison Break sees Wentworth Miller’s Michael Scofield attempting to hunt down The Company, the organisation that’s been behind the various events that have befallen him over the course of the show’s run. As you’d expect, this quest is laden with some dramatic twists and turns, in keeping with the spirit of the show, and it’s also got some major surprises up its sleeve.