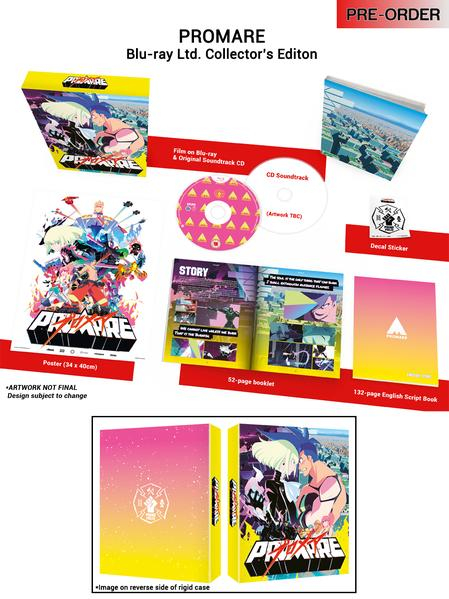 Release Date : 29/06/2020
One I'd definitely recommend for any fans of TRIGGER / Imaishi's previous works

Synopsis:
Thirty years have passed since the appearance of Burnish, a race of flame-wielding mutant beings who destroyed half of the world with fire.
When a new group of aggressive mutants calling themselves “Mad Burnish” appears, the epic battle between Galo Thymos, a new member of the anti-Burnish rescue team “Burning Rescue,” and Lio Fotia, the leader of “Mad Burnish” begins.

This collector's edition Includes -
~ Blu-ray disc featuring
--The film with English and original Japanese with English subtitles viewing options.
--"Side: Galo" & "Side: Leo" short films (*Not previously shown in UK cinemas)
--Interview with Hiroyuki Imaishi (Director)
--Studio TRIGGER roundtable
--Behind the scenes with the English cast

~ 128-page Script Book containing the script for the entire film in English that Studio Trigger were directly involved in adapting!

NOTE: All pre-orders will be shipped as close to release date as possible once stock is available.
-----
Product Details
Release Date: 29/06/2020
BBFC Cert: 12
Format: Blu-ray
Region: B
Audio: English, Japanese
Subtitles: English
SRP: £39.99
PostTweetShare Share with WhatsApp Share with Messenger
Community Updates
All The Anime Deals
New Comment SubscribeSave for later
2 Comments
8th May
Watched this the other day. Fantastic film, might grab this
8th May
Saw this at the Cinema with the director(s) interview before. 'its all about the colours, the COLOURS!'. Bonkers.