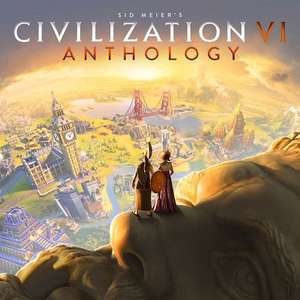 MAKE HISTORY in one of the most critically acclaimed and influential game franchises in strategy game history. Choose a leader and pursue agendas inspired by their real-life counterparts. Explore new land, research technology, and go head-to-head with historical leaders as you lead your civilization from rocks to rockets. Cities expand physically across the map, create new strategic possibilities through the game as you pursue multiple ways to achieve victory and build an empire to stand the test of time.


Experience new game mechanics including Great Ages and Governors, upgrades to the Diplomacy and Government systems, and an additional 8 civilizations, 9 leaders, and several units, districts, wonders, and buildings.


Introducing 6 new game modes, recruitable heroes from history and myth, 8 new civilizations and 9 leaders, dialed-up natural disasters in Apocalypse Mode, and the addition of secret societies that can enhance or undermine your empire.
PostTweetShare Share with WhatsApp Share with Messenger
Community Updates
6 Comments
Post a comment