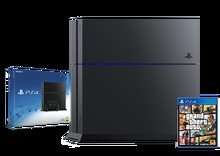 PS4 games that can be experienced whenever, wherever and however you want, thanks to a system specially built to cater to the needs of the best developers in the world.

Play digital titles as they download from PlayStation Store, and update PS4 even when it is switched off.

Immediately pick up any saved game where you left off - the suspend mode of PS4 gets rid of loading times and lets you carry on by simply pressing the power button.

Gaikai technology will let you instantly try out sections of any game that catches your eye on PlayStation Store.

Check out what your friends are up to and see the games, TV shows, movies and music recommended especially for you on the newly designed PS4 menu screen.

Broadcast as you play via Ustream. If you get stuck, your mates can join in to help you or offer comments in real time.

You can use a variety of applications, such as a web browser, while you play a game.

Your favourite PS4 games will be playable on PlayStation Vita via Wi-Fi with Remote Play.

Meanwhile, the new PlayStation App lets you turn your smartphone into a second screen - for example, to let you view a map or see how a friend is tackling the same part of a game.

PS4 was designed from the ground up to ensure that the very best games and the most immersive experiences reach PlayStation gamers. PS4 accomplishes this by enabling the greatest game developers in the world to unlock their creativity and push the boundaries of play through a system that is tuned specifically to their needs.