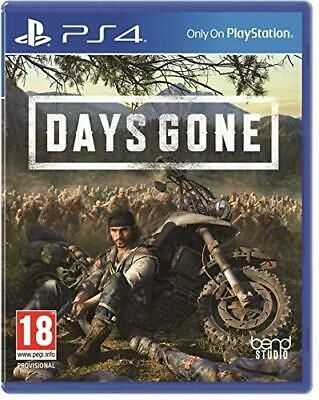 Days Gone is an open-world action game set in the high-desert of the Pacific Northwest two years after a mysterious global pandemic has decimated the world, killing most but transforming millions into mindless, feral creatures. Survivors live in a world where resources are scarce, violence and murder are common and Freakers roam the wilderness.

Players face this violent, new world as Deacon St. John, a bounty hunter, a Drifter who lives in the lawless wilderness outside the civilian encampments. Deacon survives by using skills learned before the world ended, riding for the Mongrels MC, an outlawed motorcycle club, where violence and mayhem were part of the riding the open road.

At the center of it all, Days Gone is an exploration of how any of us would react to these harsh conditions, and exploration of loss, love, friendship, revenge and desperation – learning that surviving isn’t living. For Deacon especially, it’s a struggle to ensure that hope never dies.

Developed by Bend Studio, Days Gone is in development exclusively for the PlayStation 4

Because you can’t get the Argos deal now. Geeze
29th Jul

I never get bored of the time machine comments
62 Comments
29th Jul
Still remember getting this for £13.99 from argos last month was a bargain, heat added for the price though
Edited by: "benhornsby1999" 29th Jul
29th Jul

Absolute bargain. I paid £19.85 from a deal I posted and I think that was a great price - it's a cracking game
29th Jul
Got the platinum last night, excellent game!
29th Jul

Was a collect only thing though so had to go get it thought it was still good though and long as you enjoy the game all that matters
29th Jul
It's still cheaper on the playstation store. £15. 94
29th Jul

Me too! Yeah I’m stunned at how much I loved this
29th Jul

Because you can’t get the Argos deal now. Geeze
29th Jul

Missed out on all the 14/15 quid offers. So this seems okay.

If ex rental had been this price when I bought it for £20 I'd have snapped this up. I'll save 2 quid over opening a bit of cellophane any day
29th Jul

Me too! Yeah I’m stunned at how much I loved this

Because we don't all have a time machine available to use.
29th Jul

I never get bored of the time machine comments
29th Jul

Me too! Yeah I’m stunned at how much I loved this

Initially defo, when you get on a bit you get far better... but then they get bigger the more you progress

I know thats what the game was sold in but I’m glad that’s not all it relied on.
Edited by: "odiedodie" 29th Jul
29th Jul

Wait for the saw mill one! Post game with all the upgraded skills they get much easier
29th Jul

I've had a couple of attempts at this one and have decided to get some more practice first!, I've cleared about 12 of them upto now.
29th Jul
Has anyone found the New Game Plus worthwhile?
29th Jul

Yep, the Tommy gun is the key. It's very OP and mows down hoards.
29th Jul
Started this game at the beginning of lockdown still not even half way through. Top game
29th Jul

None of the ex rental deals are good imo. Most of the time its a few pounds more for brand new. In this case its 7 pounds more for brand new at amazon, which is a fair bit more off. But for an ex rental it would have to be significantly cheaper for me to consider.
29th Jul
I got this yesterday on psn for £15. At present in playing ghost of thingies. Tremendous romp. Usually I'm a pc gamer but you can't pass up games like that. I couldn't not buy days gone for £15
29th Jul
Not as terrible OR amazing as people are saying. It's right in the middle. Which is fine.
29th Jul

Nice. I got the steel book from Amazon for a couple of quid more, I've yet to play it.
30th Jul
Epic game, give it a good few hours.
30th Jul
Highly recommended - ignore all the (meh) reviews of this game and go for it, you won't regret it.
30th Jul
There is something about this game, the story is awful. The main character and supporting cast are unlikeable. It runs like absolute garbage and it's either impossibly hard or pointlessly easy if you use the same tactic again and again. But... I played it through to platinum and I am no gamer score hunter, so there must be something about it I guess.
30th Jul
not bad price
30th Jul

‌
31st Jul
Control and Days Gone. Boomerang killing it today.
31st Jul
Great game . Doesn't do anything particularly ground breaking but it's very enjoyable, has real depth and some excellently written characters.
31st Jul
Was very hyped for this game then the reviews put me off but for 16.99 I'm gonna give it a go
31st Jul
Yes my 13.99 Argos copy is still sealed.

I’m still shocked why the price dropped so much, shot up again and has slowly come down but still not as cheap as it was.

If you buy credit from Shopto, it should come to £13.80 ish.
I’m not sure to do that or buy a used disk and get a a few quid back off it when I'm done.