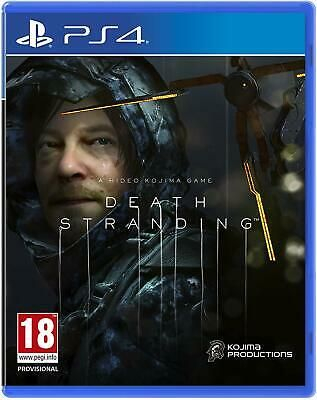 £15.99 Free P&P FreeeBay Deals
Expert (Beta)10
Get deal*Get deal*
Expert (Beta)
10Get deal*Get deal*
431°
[PS4] Death Stranding (Ex Rental) - £15.99 delivered @ Boomerangrentals / ebay
£15.99
Posted 16th Sep 2020
From legendary game creator Hideo Kojima comes an all-new, genre-defying experience for PlayStation 4.
Sam Bridges must brave a world utterly transformed by the Death Stranding. Carrying the disconnected remnants of our future in his hands, he embarks on a journey to reconnect the shattered world one step at a time. With spectral creatures plaguing the landscape, and humanity on the verge of a mass extinction, it’s up to Sam to journey across the ravaged continent and save mankind from impending annihilation. What is the mystery of the Death Stranding? What will Sam discover on the road ahead? An unprecedented gameplay experience holds these answers and more. Starring Norman Reedus, Mads Mikkelsen, Léa Seydoux and Lindsay Wagner.
PostTweetShare Share with WhatsApp Share with Messenger
Community Updates
EBay DealsEBay discount code
New Comment SubscribeSave for later
10 Comments
16th Sep
Amazing.
16th Sep
Queue people who have either not played it or given up in the first couple of chapters coming to trash the game....
Edited by: "The.Lone.Ranger" 16th Sep
16th Sep

I almost deleted the game around few hours into the first chapter.
I just gave it one more try.

Now iam 50+ hours sucked into it
17th Sep
Am near the end of the story, and it's basically turned into a 2 hour movie LOL. Story is 50% brilliant, 50% nonsense. Which works for me.

Has been a heck of a ride, and I'm planning to go back and get the Plat eventually
17th Sep
GIVE THIS GAME A CHANCE!
Honestly, I was never going to give it a chance and only did so because I got it dirt cheap, and the first hour or so I wasn’t sure, but there’s a point you just go with it and it’ll be one of the most unique experiences you’ve had.
Now that I’ve finished it, I find myself feeling nostalgic for it and I’ll tell you now, that hasn’t happened to me since Half Life days. MUST PLAY!
17th Sep
I've looked at this a few times but heard the majority of the story is basically taking an object from point A to point B.

Also the need to balance what looks like a load you would put a camel on your back using the triggers put me off.

Please correct me those who have played it!
17th Sep

Pretty much, which is why I put it off for so long, but it’s hard to explain, the game grips you in... the idea of the game was one of the least interesting things I think I’d ever heard, but after completing it, it’s one of my favourite Ps5 experiences.
Edited by: "Jack_Ch_" 17th Sep
17th Sep

Yes there is a fair amount of lugging of crates on your back. And by bike and truck.

But, imagine a game that replaces travelling around clearing out bandit camps (like most OW games) with working out how to link up isolated communities while battling the terrain, the weather and avoiding semi-invisible monsters, you're close to what DS is. Plus tonnes of weird and wonderful cut scene stories, and a few immense boss battles as well.

Honestly, the satisfaction in linking up the cities and "prepper" shelters that are separated by danger zones and sheer cliffs/mountains is immense. Initially it's just by foot, using ropes and ladders to create paths, but as you progress you build highways and ziplines - the latter are awesome.

The gameplay loop is really rewarding and often almost heartwarming, instead of systematically killing off baddies, you have to avoid conflict and help people out. The people you help often celebrate your arrival and give you upgrades as gifts.

Also, if you like the inventory management in games like Resident Evil, this will suit you. There's a constant balance to be made between brining the bare minimum so you're quick and nimble vs bringing everything you might need to survive the next trip.

It is quite slow and requires a calm patient state of mind. The story is of the sci-fi/arthouse variety, so again isn't for everyone. The protagonist is of the grunty, "don't need nobody" variety, basically Darryl from the Walking Dead, at least to begin with.

But when the gameplay clicks, it's fantastic.
Edited by: "Barryburton97" 17th Sep
18th Sep

Spot on. Especially the nostalgia part, I finished it 100% with the Platinum back in January, and I had to lend the game to someone to stop me playing it through again. Now I miss it
18th Sep

Don't worry too much about the balancing act. After the first few chapters you get access to the truck. You can then use this for everything (except about 2 deliveries you must make on foot).