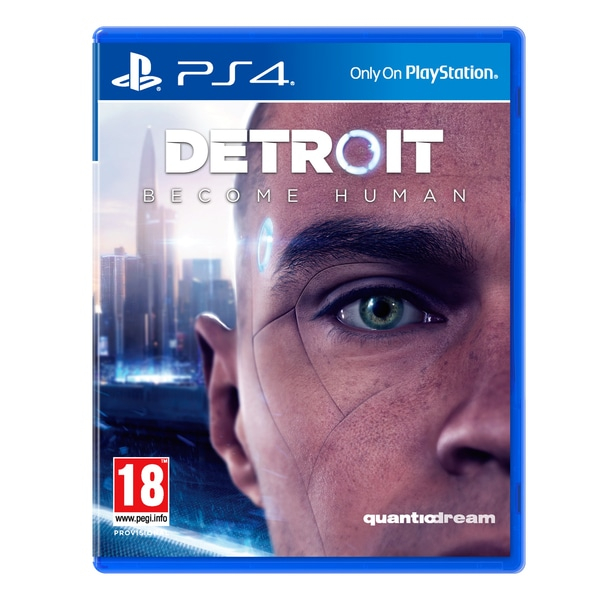 Features
Product Description
Enter the near-future metropolis of Detroit in 2038 – a city rejuvenated by the introduction of highly advanced androids that exist only to serve mankind. But that’s all about to change… Step into the shoes of three distinct android characters as this brave new world teeters on the brink of chaos. Your decisions dramatically alter how the game’s intense, branching narrative plays out. With thousands of choices and dozens of endings, how will you affect the future of Detroit?

Markus
After escaping his master and joining a growing underground faction of dissidents, Markus takes charge in the organised liberation of Detroit’s android population – but in sending a strong message to humans, will you take him on the path of pacifist disruption… or defiant violence?

Your chance to spark the fire that could lead to an android insurrection lies through Markus, a deviant who has broken free of his programming.

Kara
Seethe impoverished and run-down side of Detroit through the eyes of a newly-manufactured android that has broken her programming.

Classed as a deviant and on the run with an innocent girl she’s sworn to protect, Kara is thrown into a brutal world where you must guide her to either accept the inequalities around her… or strive to do something about them in an effort to keep her surrogate child safe.

As special police investigator Connor, your mission is to assist the Detroit Police Department in tracking down deviants – androids that have broken their programming, abandoned their owners or turned to crime.

Will you remain cool, calculating and ruthlessly analytical in your job? Or will you begin to feel empathy for the plight of your fellow androids and question the legitimacy of your mission?
PostTweetShare Share with WhatsApp Share with Messenger
Community Updates
Smyths Toys DealsSmyths Toys discount code
If you click through or buy, retailers may pay hotukdeals some money, but this never affects which deals get posted. Find more info in our FAQs and About Us page.
New Comment Subscribe Save for later
6 Comments
16th Dec 2019
Brilliant, missed this last time it was on offer. Been wanting to play it for ages.
16th Dec 2019
Got this through ps+ and thoroughly enjoyed. Normally don’t like playing games again after completing as my back log is huge but this one made me go back and play certain chapters to see different endings. Well worth the price.
16th Dec 2019
Good price for a physical copy. I'm on my first play through and already I'm looking forward to playing again with different choices. Visually stunning.
17th Dec 2019
One of the best games I've played in a while... Totally worth £10
17th Dec 2019
It was free with ps plus
21st Dec 2019
Got this with PS+. Incredible game. Well worth £10 for a physical copy!