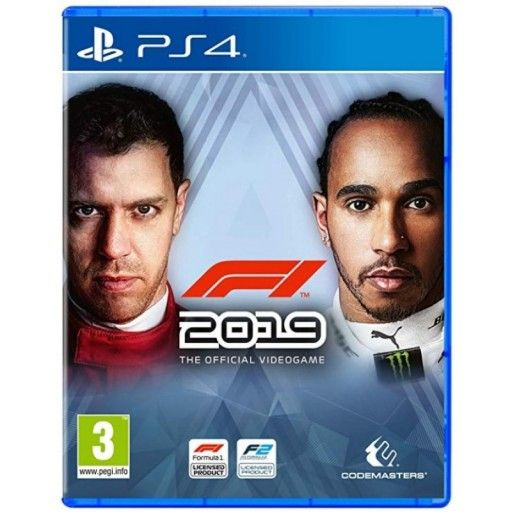 Having established itself as one of the highest rated racing franchises of all time, F1 2019 will deliver an experience that rivals the quality and production values of its real-life race counterpart and, for the first time ever, includes personalisation of a 2019 regulation car for Multiplayer racing, as well as several new game features which will be revealed in the coming months.

TEAMS
F1® 2019 features all the official teams, drivers and all 21 circuits from the 2019 season. This year sees the inclusion of F2™ with players being able to complete the 2018 season with the likes of George Russell, Lando Norris and Alexander Albon. The 2019 F2™ season content will be made available as a free digital update later in the year.

DEFEAT YOUR RIVALS
F2™ mode and Career Story: Go head to head with the biggest rivals in both F2™ and F1®. Begin your journey in F2™ and re-live the 2018 season experience the biggest rivalries in motorsport including Lewis Hamilton’s battle with Sebastian Vettel. Establish your reputation and defeat your rivals in the F2™ Story Mode before stepping into the full F1® 2019 Championship.

ESPORTS INTEGRATION
F1® 2019 features an in-game esports area giving players the latest news and highlights from the F1® Esports Series. The esports section makes it much easier to sign-up and participate in the online qualifiers, as well as seeing upcoming events in the calendar. ENHANCED VISUAL FIDELITY
Stunning new night lighting, uplifted environments and upgraded F1® broadcast rebrand visuals gets you even closer to the action. With greater emphasis on graphical fidelity, the environments have been significantly enhanced, and the tracks come to life like never before. Night races have been completely overhauled creating vastly improved levels of realism and the upgraded F1® broadcast sound and visuals add further realism to all aspects of the race weekend.

MULTIPLAYER
New League functionality allows players to find and create their own tournaments, compete in weekly challenges and customise a 2019 F1® Regulation Car, designed in collaboration with Ross Brawn and Pat Symonds.
PostTweetShare Share with WhatsApp Share with Messenger
Community Updates
The Game Collection DealsThe Game Collection promo code
If you click through or buy, retailers may pay hotukdeals some money, but this never affects which deals get posted. Find more info in our FAQs and About Us page.
New Comment Subscribe Save for later
1 Comment
24th Nov 2019
Horrible game id rather play curling