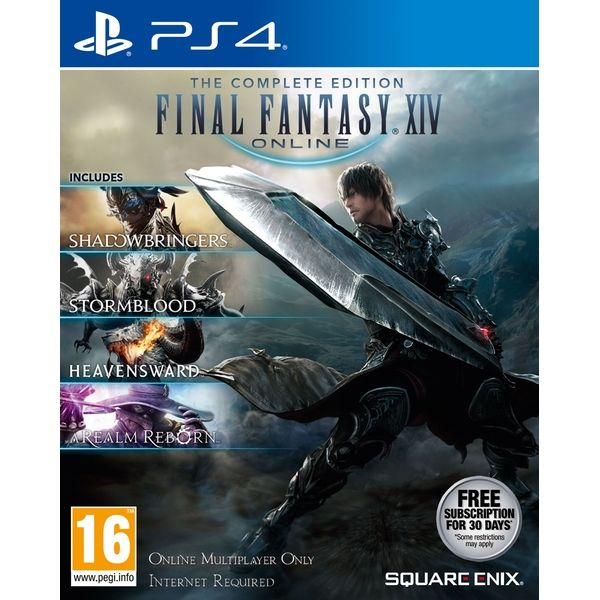 Create your own unique FINAL FANTASYhero and begin your adventures in the realm of Eorzea!

FINAL FANTASY XIV: Heavensward
Take to the skies and bring an end to the thousand-year Dragonsong War and restore light to the realm in this critically-acclaimed expansion.

FINAL FANTASY XIV: Shadowbringers
Become the Darkness in the latest expansion! Begin the next chapter and play as two new jobs - Gunbreaker and Dancer - as well as two new races - Viera and Hrothgar.

Includes a 30-day free play period. This can only be applied once to each platform on a single service account. This 30-day free play period is not applicable to platforms on which a licence has already been registered. User Registration and Service subscription required to play the Game.
PostTweetShare Share with WhatsApp Share with Messenger
Community Updates
365games.co.uk Deals365games.co.uk promo code
If you click through or buy, retailers may pay hotukdeals some money, but this never affects which deals get posted. Find more info in our FAQs and About Us page.
New Comment Subscribe Save for later
7 Comments
18th Nov 2019
Monthly subscription required to keep playing.
18th Nov 2019
Amazing game.
19th Nov 2019
I would be all over this but the monthly subscription off puts me.
19th Nov 2019

I would be all over this but the monthly subscription off puts me.

I would be all over this but the monthly subscription off puts me.

Buy the game when you have a lot of free time to dedicate to it. New copies have a free 30 trial included.
19th Nov 2019

I bought the game many years ago and used up that trial on my main account but I suppose there is nothing stopping making a new account for this, and taking advantage of the 30 day trial.
25th Nov 2019
I started playing this earlier this year and it's all I play most evenings. It's very good as far as MMORPG's go and the music is fantastic. The price is really good considering what you get. It includes Shadowbringers which came out in June for around £44 alone as an expansion. Yes it has a monthly subscription but honestly the amount that goes into the game justifies the cost. Obviously if you don't spend much time playing an MMO then it might not be worth it but you can cancel your sub and re-enable it at a later date anyway. Look up how good Shadowbringers is and you'll see what I mean.