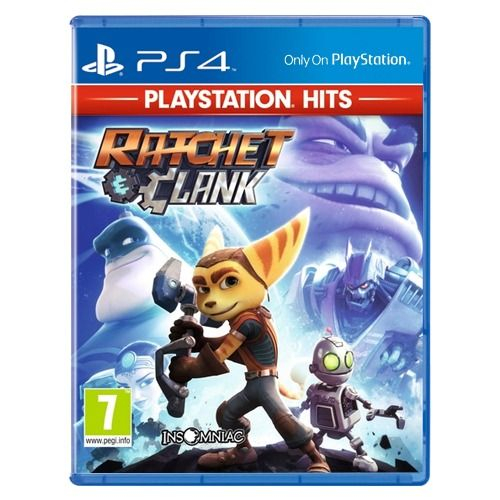 Ratchet & Clank blasts onto PlayStation 4 for the first time, with a new game based on elements from the original Ratchet & Clank (PS2). Ratchet & Clank (PS4) re-imagines the characters’ origin stories and modernizes the original gameplay. Featuring all-new boss fights, several new planets, new flight sequences, and much more – with completely new visuals constructed to take advantage of the power of the PS4.

Produced alongside the major motion picture coming to theatres in 2016, Ratchet & Clank is a curated experience borrowing from the spirit of the classic PS2 titles while infusing some of the best elements from the Ratchet & Clank Future games. Return to the Solana Galaxy and find all your favourite characters: Ratchet, Clank, Captain Qwark and super villain Chairman Drek, as well as many new ones in this third-person action-adventure platformer. Explore exotic planets, collect out-of-this-world weapons, and help Ratchet and Clank save the galaxy for the first time, again.
PostTweetShare Share with WhatsApp Share with Messenger
Community Updates
Cyber Monday 2020 DealsMonster-Shop Deals
If you click through or buy, retailers may pay hotukdeals some money, but this never affects which deals get posted. Find more info in our FAQs and About Us page.
New Comment Subscribe Save for later
10 Comments
2nd Dec 2019
What does playstation hits mean??
2nd Dec 2019

What does playstation hits mean??

What does playstation hits mean??

I would recommend the HD trilogy on ps3 if you can get it, has 6 times the game content than the ps4 movie tie in
2nd Dec 2019

Ah cool never realized it was a movie tie in, and thanks for the tip! I'm on the lookout for it right away.... What a great game.
2nd Dec 2019

is based on the original game, or the first half of it anyway, made in 2002 for ps2, they also borrowed a couple of elements from the 3rd, finish the ps4 onee then try the trilogy, the difference is pretty huge
2nd Dec 2019

Looking forward to it, thanks!
3rd Dec 2019
These games were the only reason I bought a ps3 and 4. The first Ratchet and Clank is still my favourite game of all time
3rd Dec 2019