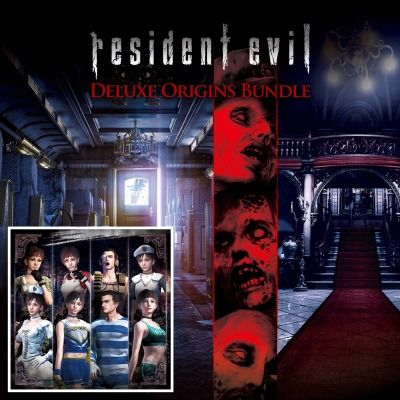 Two games. Two nightmares. Be prepared to go back to the origins of gaming's best-selling survival horror series in Resident Evil Origins Collection. These remastered versions takes the fear-inducing atmosphere from the original releases and transforms them with stunning new HD visuals, improved sound, widescreen support and an optional modernized control system and more. There’s no better way to experience the beginning of the storied franchise.

In the original Resident Evil, you will choose to take on the role of either S.T.A.R.S. (Special Tactics and Rescue Service) team member Chris Redfield or Jill Valentine, who have been sent into the city to find the missing Bravo team. When the team is suddenly attacked by a ferocious group of mutated dogs, desperate for an escape they take shelter in the Mansion, but will they ever get out alive again? You will need to be brave as you adventure through the dark, enclosed spaces searching out the horrors that await them. With limited ammo and survival items available, you will need to keep your wits about you to survive the various traps and puzzles that greet you at every stage.

In Resident Evil 0, you go back one day further. Reports have been mounting about unusual murders on the outskirts of Raccoon City. The city’s Special Forces division, S.T.A.R.S., sends their Bravo Team - including rookie cop member Rebecca Chambers - to investigate. On route, the team’s helicopter suffers engine trouble and is forced to make a crash landing, where they find an overturned prisoner transport vehicle. Splitting up to search the area, Rebecca discovers the Ecliptic Express, a train stopped dead on the tracks. Inside, she meets death row convict and ex-Navy lieutenant Billy Coen. Throughout the game, you will take control of both Rebecca and Billy, at times switching between both characters in order to proceed. Learning the advantages of each character is the key to solving puzzles and surviving the nightmares that lie ahead.
PostTweetShare Share with WhatsApp Share with Messenger
Community Updates
Playstation Network DealsPlaystation Network Discount Codes
New Comment SubscribeSave for later
6 Comments
28th May
Awesome bundle, great price...
28th May
Classics, heat
28th May
2 bare bones ports of 18 year old games (one of which is a remake of a 24 year old game)

😴
28th May
Resident Evil by itself has been dropping to £3.99 recently (although currently back to £15.99), so might be better waiting for that to drop again. Resident Evil 0 is OK, but the first was much better.
28th May
Wish they were closer to this price on switch.