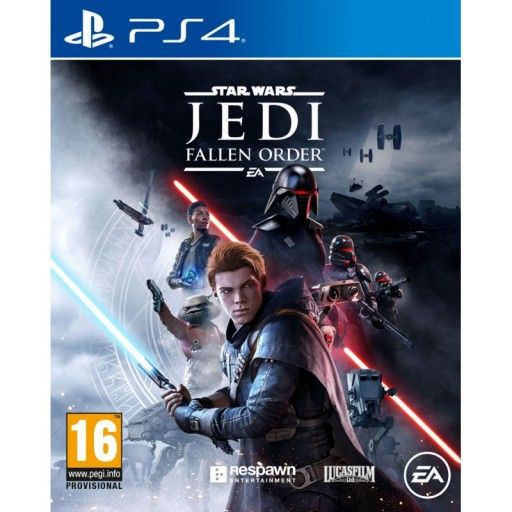 A galaxy-spanning adventure awaits in Star WarsJedi: Fallen Order, a new 3rd person action-adventure title from Respawn Entertainment. This narratively-driven single player game puts you in the role of a Jedi Padawan who narrowly escaped the purge of Order 66 following the events of Episode 3: Revenge of the Sith. On a quest to rebuild the Jedi Order, you must pick up the pieces of your shattered past to complete your training, develop new powerful Force abilities, and master the art of the iconic lightsaber - all while staying one step ahead of the Empire and its deadly Inquisitors.

While mastering your abilities, players will engage in cinematically-charged lightsaber and Force combat designed to deliver the kind of intense Star Wars lightsaber battles as seen in the films. Players will need to approach enemies strategically, sizing up strengths and weaknesses while cleverly utilizing your Jedi training to overcome your opponents and solve the mysteries that lay in your path.

Star Wars fans will recognize iconic locations, weapons, gear, and enemies while also meeting a roster of fresh characters, locations, creatures, droids and adversaries new to Star Wars. As part of this authentic Star Wars story, fans will delve into a galaxy recently seized by the Empire. As a Jedi hero-turned-fugitive, players will need to fight for survival while exploring the mysteries of a long-extinct civilization all in an effort to rebuild the remnants of the Jedi Order as the Empire seeks to erase the Jedi completely.

Cinematic, Immersive Combat – Jedi: Fallen Order delivers the fantasy of becoming a Jedi through its innovative lightsaber combat system – striking, parrying, dodging - partnered with a suite of powerful Force abilities you’ll need to leverage to overcome obstacles that stand in your way. This combat system is intuitive to pick up, but takes training and practice to fully master its nuances as you gain new powers and abilities along your adventure.
A New Jedi Story Begins - As a former Padawan on the run from the Empire, you must complete your training before Imperial Inquisitors discover your plan to revive the Jedi Order. Aided by a former Jedi Knight, a cantankerous pilot, and a fearless droid, you must escape the evil machinations of the Empire in a story-driven adventure. Explore and overcome a wide range of challenges focused on combat, exploration, and puzzle-solving.
The Galaxy Awaits - Ancient forests, windswept rock faces, and haunted jungles are all unique biomes you’ll explore in Jedi: Fallen Order, with the freedom to decide when and where you go next. As you unlock new powers and abilities, opportunities open up to re-traverse maps in new ways; leveraging the Force to augment the way you explore. Move quickly, however, as the Empire is actively hunting your every step in their effort to exterminate all remnants of the Jedi Order.
PostTweetShare Share with WhatsApp Share with Messenger
Community Updates
The Game Collection DealsThe Game Collection promo code
New Comment Subscribe Save for later
17 Comments
9th Apr
Cheapest it’s been yet, heat from me
9th Apr
Why is this cold - its the cheapest its been - just the other day we had one from Amazon at a higher price go hot
9th Apr

Well that's the thing with this place. it goes cold without people commenting why
9th Apr

Yes I really dont like that aspect about this place. I mean if you are going to vote cold atleast leave a line saying why - maybe there is a better deal out there, in which case the community should know of it - otherwise we defeat the purpose of this place. If you are just going to vote cold on a whim, then you are misleading folks and maybe shouldn't consider voting something cold for example. Maybe thats too much to ask
9th Apr

What can I say mate - potentially it got caught in the cross fire of the TGC triple whammy deals last night? Even so it doesn't make sense to me, coz its a good deal.
9th Apr
This was £20 about a month ago, I should've bought then.
9th Apr

This was £20 about a month ago, I should've bought then.

Yes, that was xbox one
10th Apr
Good price, just ordered thanks
10th Apr
Heat from me, get this bad boy heated. I think it’s getting cold compared to the digital copy.
10th Apr
Just watched the IGN review & ordered. Thanks OP.
11th Apr
Good price. For me this is about what it’s worth! I paid £50 for it and wish I hadn’t.
11th Apr

The games cold because its a plod, predictable, and the whole 'Star Wars' IP is stale and stagnant. The bar is low on this one, £2.99 is about right.
20th Apr

79 and 7.7 respectively on Metacritic, generable favoruable reviews from most sources and holding a solid price months after launch...
20th Apr

The fun in anything Star Wars, is as elusive as Boris Johnson.