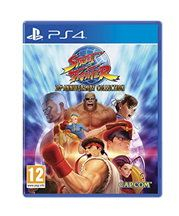 Celebrate 30 years of the most iconic fighting game series – The hit series with over 39 million units in global sales returns for its 30th anniversary celebration with a compilation of 12 classic arcade titles in one package.

Relive the titles that made gaming history – Includes the original Street Fighter released in 1987 which introduced two of gaming’s most famous heroes, Ryu and Ken. Additionally, the iconic Street Fighter II became the first ever one-on-one video game that gave players a choice of characters, including the debut of the series’ strongest female Chun-Li. Street Fighter III continued the core numbered series and was the first game to introduce the parry attack.

New gameplay options including online play – Players can utilize save states as they progress through the game offline. In addition, players can duke it out online in four classic titles (Street Fighter II: Hyper Fighting, Super Street Fighter II: Turbo, Street Fighter Alpha 3 and Street Fighter III: Third Strike). In addition to Ranked and Casual Match options, up to four players can join a lobby where they can play against the CPU while waiting for their match. Each title will have their own Global leaderboard and the "rewind" tech ensures low-latency online battles.

Hadoken your way down memory lane – Revisit historic moments from the series and explore an interactive timeline of events that helped create one of the world’s leading fighting game series. View stunning pieces of concept art and uncover little known facts behind each game release.

Learn more about fan-favorite characters – Scroll through character bios and learn new details about series favorites whilst enjoying sprites and key animations to see how the classic fighters have evolved over time.

Remember the tunes! – Sit back and enjoy the most memorable Street Fighter tracks from the collection in the Music Player.
PostTweetShare Share with WhatsApp Share with Messenger
Community Updates
Base.com DealsBase.com discount code
If you click through or buy, retailers may pay hotukdeals some money, but this never affects which deals get posted. Find more info in our FAQs and About Us page.
New Comment Subscribe Save for later
4 Comments
6th Dec 2019
I'm tempted becasue I would like to play a defenitive edition of SF2, does it have any practice/tutorial options because I know nothing about SF/Fighting games
6th Dec 2019

Absolutely no tutorial but there is a practice mode for Hyper Fighting (best version on SNES) and Super Turbo (final arcade version that is still played today). PLENTY of resources on YouTube and search engines if you want to learn however (goes for any fighting game really).
7th Dec 2019

Street Fighter 4 has a very good practise mode, it encourages you to pull up every move in the game with every character, plus combos you get from high level players.

This compilation doesn't have Street Fighter 4 sadly, but you will get very good playing these games, even on the lowest difficulty you will lose a lot.

If you can afford one, get a stick and learn from scratch on that. It's easy to pick up bad habits on a controller and your thumbs will get shredded.
7th Dec 2019
does this come with 4 code?