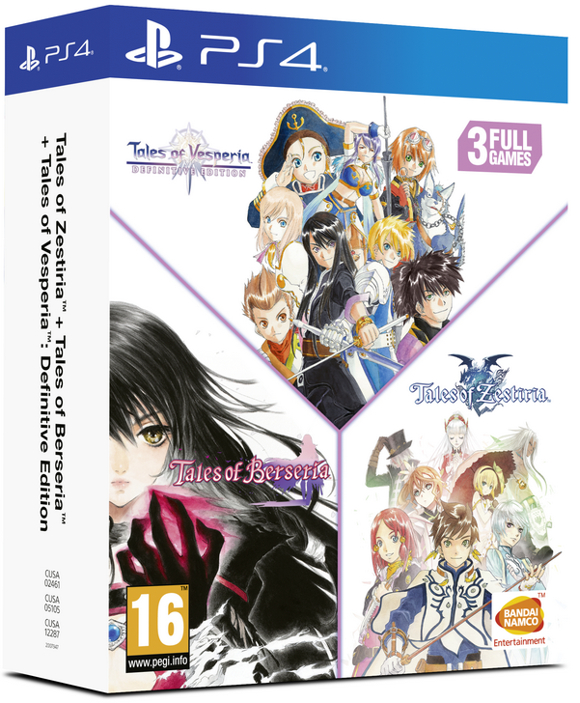 A power struggle begins in a civilization dependant on an ancient technology, the blastia, and the Empire that controls it. The fates of two friends traveling separate paths intertwine in an epic adventure that threatens the existence of all. Tales of Vesperia marks the first Tales RPG release in HD with detail and graphics never before seen in the series. Now, real-time battles are more exciting than ever with over limits, the ability to unleash fatal strikes, combinations and burst artes.

In TALES OF BERSERIA, players embark on a journey of self-discovery as they assume the role of Velvet, a young woman whose once kind demeanor has been replaced and overcome with a festering anger and hatred after a traumatic experience three years prior to the events within TALES OF BERSERIA. Velvet will join a crew of pirates as they sail across the sea and visit the many islands that make up the sacred kingdom of Midgand in an all-new adventure developed by the celebrated team behind the TALES OF series.

Follow Sorey in his initiatory trip and become the Shepherd: accept his burden, light up human's hearts and disperse the darkness of a world torn by chaos to try making the ancient legend finally come true.
PostTweetShare Share with WhatsApp Share with Messenger
Community Updates
Coolshop Deals
New Comment Subscribe Save for later
5 Comments
4th Feb
Nice!
4th Feb
Very cool compilation.
4th Feb
Decent deal! Already own vesperia and zesteria individually
5th Feb
That is a lot of content for the price.
26th Feb
Am I the only one with payment issues on coolshop? Keeps rejecting payment from my visa debit even though my billing address is correct.. I went and looked at the reviews of this site and I'm glad I dodged a bullet, everyone says they are horrendous.
Edited by: "MechaMobius" 26th Feb