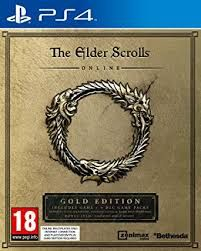 
In 2015, The Elder Scrolls Online took 20 years of best-selling, award-winning fantasy role-playing games online. Now, with The Elder Scrolls Online: Gold Edition, own the complete story plus four extensive DLC game packs. From Skyrim to Daggerfall, this will be the easiest way to explore all of Tamriel - travel to Abah's Landing to master the art of thievery with the iconic Thieves Guild, become a deadly assassin of the Dark Brotherhood in the Gold Coast, or ride to Wrothgar and aid the Orc King Kurog in rebuilding Orsinium. Adventure through Tamriel alone, with friends or Guild members, or head to Cyrodiil to join thousands of players in an epic player vs player Alliance War. Master any weapon, craft epic armor sets, and customize your abilities to create a character that is truly yours. The choices are yours and the decisions you make will shape your destiny and the persistent world of The Elder Scrolls Online.

All in One
The Elder Scrolls Online: Gold Edition includes not only the base game, but also the first four DLC Game Packs with over 40 hours of additional story content, four brand new zones, new enemies, and tons of loot.

Constantly Evolving
Working in conjunction with the community, the development team has continued to evolve and update The Elder Scrolls Online since launch with new content and features, including the soon-to-be-released One Tamriel.

Play the Way You Like
Battle, craft, fish, steal, siege, or explore. The choice is yours to make in a persistent Elder Scrolls world. Use any weapon or armor at any time and customize your abilities to play the way you want as you uncover the mysteries of Tamriel and adventure on your own terms. Battle on your own, quests with friends, or join an army of thousands in epic player versus player battles.

No Game Subscription Required
With no game subscription required to play, purchase the Gold Edition for the complete ESO experience so far. PS4 and Xbox Oneplayers need an active PS+ or Xbox Live Gold subscription to play.
PostTweetShare Share with WhatsApp Share with Messenger
Community Updates
Base.com DealsBase.com discount code
If you click through or buy, retailers may pay hotukdeals some money, but this never affects which deals get posted. Find more info in our FAQs and About Us page.
New Comment Subscribe Save for later
8 Comments
8th Dec 2019
For the record, the four main DLCs on the Gold Edition add up to around 9500 'crowns', which would cost around £50 of PSN credit to purchase separately.
8th Dec 2019
Imo ESO is a great game, and that is a huge amount of content for the price.

It does have micro transactions and loot boxes but they can be totally ignored and it isn't pay to win.

Also has a monthly subscription, not needed but does help a lot, gives you monthly crowns (in game currency) a craft bag (unlimited storage for crafting materials), double Bank space and double the amount of items you can store in a house, plus extra XP and a few other thing.
8th Dec 2019
Loved this game on the pc along with DLCs. Been a fan of the elder Scrolls since the original Xbox. It's like end but much quicker and more exciting. Although not as many laughs!
8th Dec 2019
Oos
8th Dec 2019
Time to expire OOS
8th Dec 2019

Nah, you can get them all for 4k crowns I'm sure. What's included in the Guilds and Glory pack? Add to that, it's regularly on sale too. Was around 1.5k crowns not long ago. However, I'm not 100% sure what the 4 dlcs are in that bundle.
8th Dec 2019
Been getting back into this recently on Xbox One X. Playing through the latest Elsweyr, enjoying it quite a bit. Very chilled game to play.