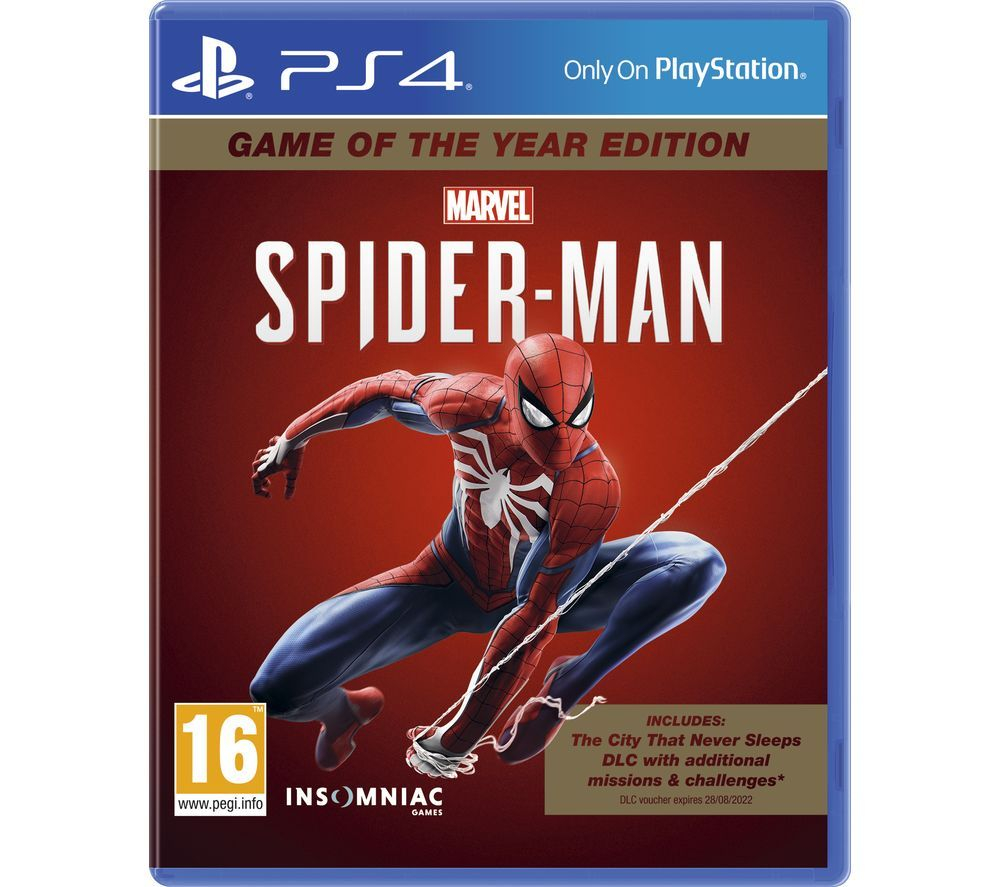 In Marvel's Spider-Man: Game of the Year Edition, you'll get the full original game, as well as three post-launch story chapters with new characters and missions.

As familiar enemies team up to create the Sinister Six and complete a prison breakout, it's your job to help save the day and restore order in a disrupted city.
PostTweetShare Share with WhatsApp Share with Messenger
Community Updates
Currys PC World DealsCurrys PC World discount code
If you click through or buy, retailers may pay hotukdeals some money, but this never affects which deals get posted. Find more info in our FAQs and About Us page.
New Comment Subscribe Save for later
36 Comments
28th Nov 2019
Cheaper in Argos at £13
28th Nov 2019
i love this site!!! love BF .............~skint~
28th Nov 2019

What’s the difference between this and the standard version?

This one comes with all the dlc

Its more of the same as you'll find in the main game, doesn't add much else really just a bit about Sable and what they are up to. If you're a spidey fan then yeah get GOTY edition.
28th Nov 2019
Heat!

Saves having to buy the DLC on the PSN Store and is worth more when you decide to sell it on if it is not for you.

Edit: - Turns out the DLC is a code and not on the disc as I originally though, thanks for clearing up my confusion.
Edited by: "TheDonovanViper" 28th Nov 2019
28th Nov 2019

It won't be worth more if you redeem the code that comes with the box. The DLC is not on the disc for this GOTY.
28th Nov 2019

I think DLC is a download code inside the box not on disc.

Hmmm, I’ll consider getting this instead. Thank you
28th Nov 2019

For the money, yes, even if it's just for the suits. Screwball is rather annoying and you do seem to get through each story rather quick but overall I'd recommend it.
28th Nov 2019

I know mate, was just trying to make a point that it's a different version ‌
28th Nov 2019

It was chaos in my local Currys, staff running everywhere and stock piled up in no particular order. They tried to give me the regular edition but it seems they had bundled my copy with another order by mistake so managed to get it in the end.
3rd Dec 2019
Chased currys today for my order from Thursday evening (over 30 minutes on hold). They claim that despite them giving me an order number and my paying with a gift card the order didn't good through and even failed orders have an order number. Won't do anything about it