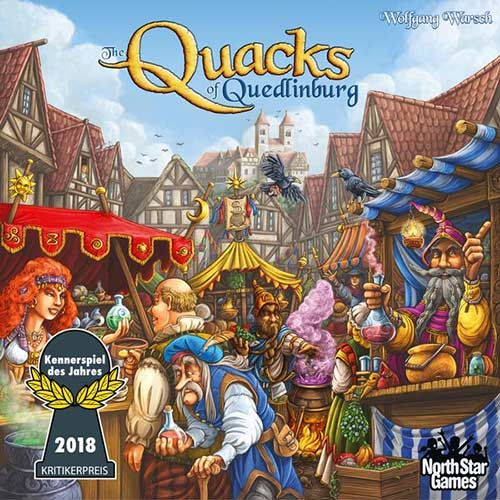 Originally spotted on "Board Game Trading and Chat UK" FB group along with discount code.

Great game that will one day make it into my collection. Cheapest I've seen it. NBP is Amazon. 7.8 on BGG

Wolfgang Warsch is becoming a bit of a superstar. He's releases multiple games during short time frame, including; The Mind, Ganz Schon Clever and The Quacks of Quedlinburg.

In the game you are Quack doctors brewing your potions to charm the masses. Of course, you may need to fill it up with rat tails but what they don’t know…

The main mechanics at play are push your luck and bag building. Each round you will draw ingredients from you bag and add them to you cauldron player board, starting at the middle and spiralling outwards. Each ingredient is number 1-4 and that’s how many spaces the ingredient moves around the cauldron. Your bag starts with lots of white ingredients in and one green and one orange. The trick being that if the total value on the white ingredients totals more than seven your cauldron explodes and you bust.

The further around the cauldron you get, the more victory points and spending power you receive. You can choose to buy up to two new ingredients of different colours at the end of the round. Not only do they not explode your cauldron, but also give you access to special powers. These powers are colour specific but for each colour there are four different powers, with you choosing one each game or going with the suggested set-ups.

If you explode, you cannot choose to use your money and take victory points, but must instead take only one. The powers of the ingredients give you plenty of options for avoiding explosions by mitigating the dreaded white ingredients but this is a luck-based game and you are going to sometimes just draw all your white ingredients in a row.

Quacks of Quedlinburg has tons of variety, a great catch-up mechanic and is just plain old fun. Thanks to the ingredient powers there is plenty of variety and The Herb Witches expansion adds even more, with new powers, new ingredients and the titular witches themselves.

I got this when the deal was posted last. Punched the other day and they're fine. My four year old helped and if they were bad then there would have been tears, there weren't so unless something terrible happens in play I think they'll be fine!!
11th Jan

A few people have commented the printing comes loose after a few plays.
11th Jan

I think they tend to wear off or something as seen people putting the coins in little plastic coin holders.
11th Jan

Yeah, I've seen that too, but thought it was just typical board game blinging (like card sleeves)
11th Jan

Think it's more practical than that (although I'd imagine it makes it annoying to play). I'll have an investigate
11th Jan

It's the ingredients tokens, image taken from BGG, allegedly after one play 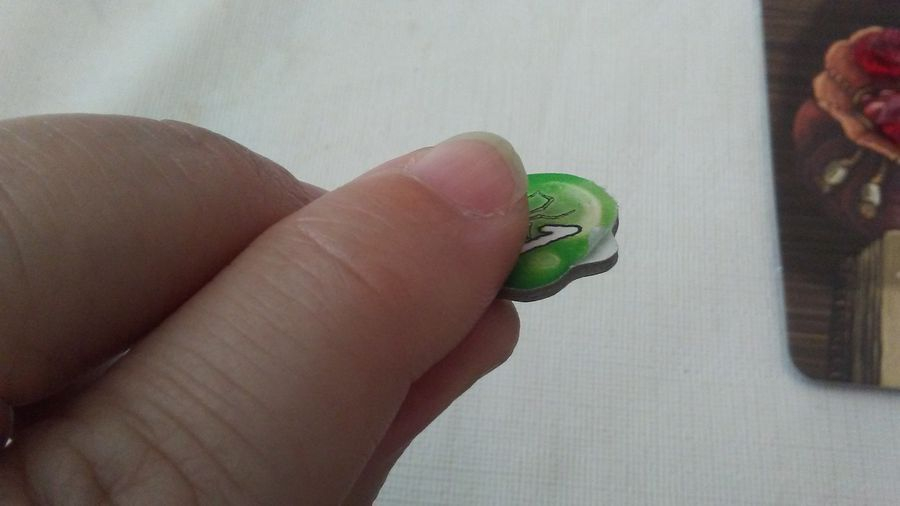 ‌ ill have a look 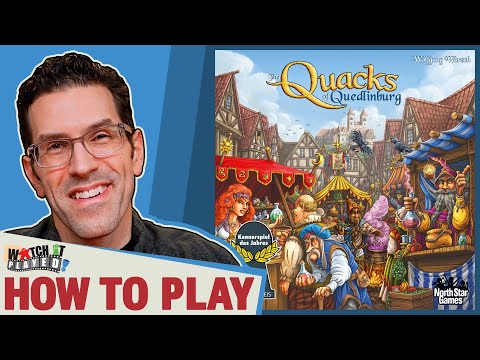 Rodney has it sorted for you
11th Jan
The issue is by design - repeated bagging and jumbling of tokens (think Azul) isn't healthy if they're made of cardboard. It's just the wrong material for the job.

Solutions include coin capsules or after market plastic tokens... But those at least double the price of the game. Some have had limited luck with binding sprays... But it's an issue that put me off personally.
11th Jan

Really should be plastic but can spend £40 like you say on those. Such a shame
11th Jan
I suspect there are more tokens in Quacks, but Azul has 100 tiles and goes for 20-25 so it could have been possible if offered from the start.
11th Jan

21mm coin capsules seem to be the consensus but they aren't cheap either. Think you need 300
11th Jan
I've just noticed the code here is from Board Deck and Dice - I would highly recommend checking out their YouTube channel - I met Nick at UKGE a few years back and had a game with him (met via Facebook group) and he's a great chap
11th Jan
Just a note, if you want to go all in, the expansion Herb Witches is also only £13.79 on Zatu, also the cheapest around.
11th Jan
Pack of 100 Clear Coin Capsules Containers Boxes Holders 6 Different Sizes Available 21mm 26mm 30mm 32mm - Green, 21mm amazon.co.uk/dp/…S9W

Well done, was going to go on a hunt for those later
11th Jan
How funny, look what came today

Well done, was going to go on a hunt for those later

I'm a bit confused why the listing says green... Definitely the cheapest I see tho
11th Jan

Good spot, the ones I found were about twice the price. 300 for base game afaik
11th Jan
I wonder when someone will actually comment on the game itself and whether it's any good rather than commenting on the coins.... Can anyone help me out?
11th Jan

Check the bgg link in the OP. There are plenty of reviews in there.
TL;DR yes it is good
11th Jan

I'm not a big youtube channel fan but will check them out as not the first person to say that to me. I'll probably be at UKGE this year if I can get round to sorting it with my gaming group.
11th Jan

It's amazing! Lots of fun, very easy to teach and not too long. Only criticism is that the base game is 4 player only.
11th Jan

Yes, played it for the 1st time at Funcon, great game, good for family as well as adults, easy to learn. Good element of strategy and as you all draw & lay your pieces at the same time, little down time as with some bigger games so not a long protracted game.

If you need 5 players get Herb Witches as well as it adds another player board to total 5 players, and for the £13 odd quid worthwhile.
11th Jan

Great family game, not one of my favourites as don't really like 'push your luck games' but still enjoyable. Bought about a year ago and have lots of plays with it in groups of 4, not as much fun with less players. Great price, so grab it if you can, goes out of stock sometimes so can me hard to source.
11th Jan
And if you want to shave a few quid off and you do eBay = ebay.co.uk/itm…XEM

Just finished doing mine. Took about 2 hours . Looks good though. Managed to fit capsules and expansion in original box too, not flush but good enough.
11th Jan
Thank you. Had my eye on this. Was dithering about whether to get another game but my resolve crumbled and I bought it.
11th Jan

You can never have enough!

You can never have enough! [Image]

Kallax!
Edit : What's photosynthesis like? I think I'd love it but never get it to the table
Edited by: "jayhutton10" 11th Jan
11th Jan

What else! Gotta love a shelfie.

I really like photosynthesis. Easy to teach the mechanics but kinda hard for some people to grasp. It's needs the right group as it's very easy to outplay less strategically minded folk. Quick setup/teardown too, pretty much plays out of the box. Well worth a look!
Edited by: "pr2thej" 11th Jan
11th Jan

What else! Gotta love a shelfie.

Mines pitiful in comparison with that
What's photosynthesis like? I edited previous reply but you probably didn't see it
11th Jan

Ooh don't tempt me. Wish I'd picked it up last year when it was cheap on amazon. I'll keep my eye out for it
12th Jan
Played last night
Not a mark on the tokens
12th Jan

Played last nightNot a mark on the tokens

Nice one, was it good?
I think some of the criticism is that they wear unevenly as wellso you can tell which token is which by the feel. Seems most people were capsuling Quacks yesterday judging by FB
12th Jan

Yeah, I could possibly see how that would happen with sweaty hands and lots of play. I'm definitely considering it!!

Game was great. Played with the parents and wife and went down well

The initial impression was a bit imposing for them but after the first round they all got it and my dad won in the end.
Glad I bought it