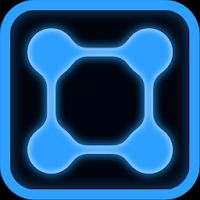 Quaddro 2 is a fun game that improves your concentration and logic skills. It brings 80 levels carefully crafted by our team with progressive difficulty levels.

Its gameplay is quite simple: you move the dots freely until you form a square with 4 or 9 dots; You can move as many dots you’d want at same time, that will look much like dragging snake across the level; The dots can be varied in up to 3 colors: red, green and blue but squares will only be formed by dots with the same color.

The levels pack many types of modifiers what will make you think outside the box:
• Movable platforms: Changes the layout of the level by moving pieces of the board vertically or horizontally.
• Turn Modifier: Rotate boards and it’s contents in 90 or 180 degrees;
• Mirror Modifier: Swap platforms places
• Wall Modifier: Blocks the access to certain parts of the level until you make an specific action.
• Timer Modifier: Better think fast, the level layout will change every time the timer runs out.
PostTweetShare Share with WhatsApp Share with Messenger
Community Updates
Google Play DealsGoogle Play voucher
New Comment Subscribe Save for later
2 Comments
22nd Feb
Thanks!
22nd Feb