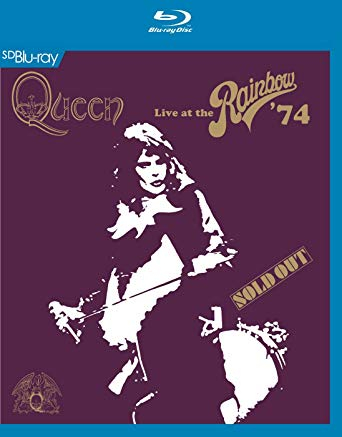 "Queen dazzled their audiences in 1974 with an unforgettable show at legendary London venue The Rainbow, delivered with a skill and confidence which belied their youth. The tape machines were rolling, capturing the highly electric performances. Now, to mark the 40th anniversary of these legendary shows, here, finally, is Queen: Live at the Rainbow ’74 - lovingly restored, edited, mixed and digitally mastered, and including much footage never previously seen."
PostTweetShare Share with WhatsApp Share with Messenger
Community Updates
Amazon DealsAmazon discount code
New Comment Subscribe Save for later
6 Comments
24th Jan
Thanks @groakybaby bit rude not to at that price
24th Jan
Just had to look up what an SD Blu-Ray is, never seen that before but then Iv only played new tech films I guess.
24th Jan
Proper Queen
24th Jan

It was recorded on video, it has quite obvious and thus visible interlacing artifacts on the material I've seen. You can see what I mean at 1:55 in this video clip > youtube.com/wat…2_8

Queen were a totally different and much better band in the 70's, in the 80's they effectively sold out and were at times horribly cheesy but were at the height of their fame, due to their Pheonix from the Ashes meteroic rise after Live Aid.

They were as heavy as any metal band got in the 70's really, an example >

They did the odd heavy track not long before Freddie died >

I'd have to respectfully disagree with you there re them selling out. Yes they went mainstream but they were and still are one of the most joyful, creative and genuine musical acts in history. When I was a kid I adored their videos, from camp to grim to magical to sarcastic. So much fun.