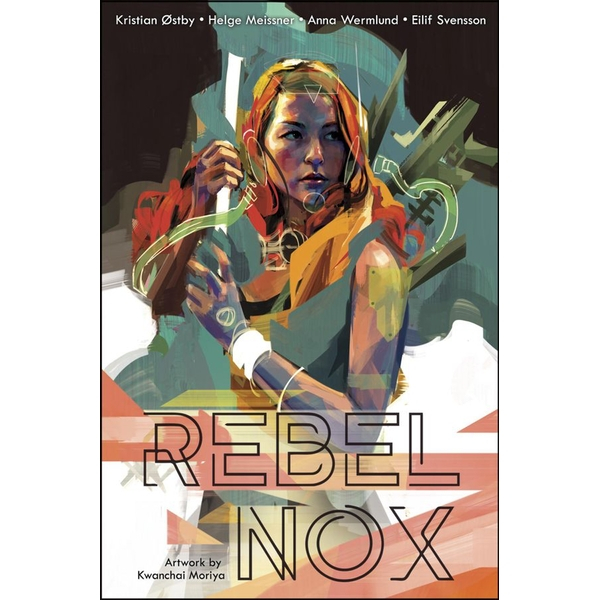 Seems to be a bit of a different card game with a mix of deduction and trick taking. Sounds an interesting concept but possibly doesn't quite pull it off as rates 6.5 on BGG. Still for the price it would be different enough to give it a go. NBP is Shop4World (same group as 365games)

Rebel Nox is a highly tactical team-based card game with shifting alliances and a hint of social deduction. It is a stand-alone game set in the world of Capital Lux.

The world of Lux is in uproar and rebels and loyalist fight for control of the capital. Who is on your side? Will your team gather enough followers to seize power? And who is true to your cause when it looks lost?

With the cards dealt at the beginning of the game, players are assigned to either the Rebel team or the Loyalist team. The two teams fight for control over locations that alter the rules in that particular fight, and provide influence to the winner. Play your cards tactically to establish who is on your team, take control of locations and make sure your team has the most influence at the end of the round. But as cards change hands, allegiances can change, so who can you really trust? Perhaps you secretly switched team yourself?

The near endless combinations of locations and card distribution make for a vast number of unique situations and tactical challenges, ensuring no two games will ever feel the same.
PostTweetShare Share with WhatsApp Share with Messenger
Community Updates
365games.co.uk Deals365games.co.uk promo code
New Comment Subscribe Save for later
9 Comments
14th Jan
Better off doing mind at £6.99 on eBay? Discuss lol
14th Jan

Better off doing mind at £6.99 on eBay? Discuss lol

Legit copy? Probably I do like the mind. Been looking at Hanabi recently as well.
Not played this but thought it looked a bit different.
15th Jan

I'm after something a bit more abstract to play at work during dinner break and thought Hanabi would fit the bill.
15th Jan

Great, just need to work out how I can order it to deliver to work now
Edited by: "jayhutton10" 15th Jan
15th Jan
I'll give Rebel Nox a miss but heat for the price.

I'm delving into 3rd Edition Arkham Horror now with my Sunday afternoon group - the difficulty is really hard and if you get unlucky with the dice it's pretty much impossible. And this is after Journeys in Middle Earth! We are clearly masochists
15th Jan

Funnily enough was looking at Arkham Horror and decided it's not for me. Playing Dune on Friday though and been looking at Arkwright (mainly because I live near to Arkwrights Mills). The days of medium/light seem to be over for me
15th Jan

Makes sense, I can't actually recommend it. One of our group just keeps buying difficult and long horror/fantasy games that we end up playing 6 or 7 times then give up. There's no telling him to stop though.