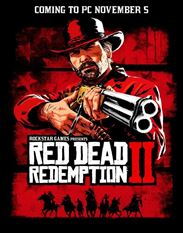 Note: Activation code must be redeemed on a valid Rockstar Games Social Club Account. You need to use Rockstar Launcher for activation.

Red Dead Redemption 2 for PC is the ultimate way to experience one of the most critically acclaimed games of all time, winner of over 175 Game of the Year Awards and recipient of over 250 perfect scores.
PostTweetShare Share with WhatsApp Share with Messenger
Community Updates
Voidu DealsVoidu Discount Codes
If you click through or buy, retailers may pay hotukdeals some money, but this never affects which deals get posted. Find more info in our FAQs and About Us page.
New Comment Subscribe Save for later
14 Comments
22nd Nov 2019
Not sure if still same price but can get special edition for £28 from Rockstar Store using VPN
22nd Nov 2019

It does run a risk of you getting your whole account banned. It may not happen but depends if you want to pay a little more to be safe.
22nd Nov 2019

Know anyone who has been banned?

Banned? Don't be silly
What if I accidentally left my VPN on
What if actually went to Russia and bought it whilst on Holiday
22nd Nov 2019

techically if your account is europe, you have to buy europe region even if you are holiday on Mars. and they can and will ban you, well on steam anyway.
22nd Nov 2019

what if you was on the moon...WoW

Free, no currency or tax since no country can claim ownership of the Moon because they signed the space treaty
22nd Nov 2019

So basically if you move country, go on holiday, stay abroad for awhile maybe for work or family it's technically not allowed?

you will have to argue with steam, not me, its their terms and condition. if you want to use russia for example. you have to move there and not just on holiday. you would then have to manually change your account to russian account which comes with certain restrictions. for example, you cant change region more than once a year or something like that, you cant play russian game outside russia for first 3 month. they can and have banned people buying games with vpn. and hey dont kill the messager.
22nd Nov 2019

But this a key for the Rockstar Launcher not Steam.
22nd Nov 2019

But this a key for the Rockstar Launcher not Steam.

Similar regulations. Until someone is banned it's theoretical, of course, but it's still breaking the digital rights rules. Whether you want to do that or not is, of course, up to you, but I was pointing out that people may well not want the risk and want to have a cheap alternative.
22nd Nov 2019

Aw no, I know that. I just didn't want to confuse people thinking it was a Steam key instead of a rockstar key.
27th Nov 2019
Expired