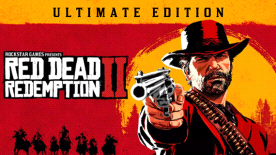 GAME DESCRIPTION
The Red Dead Redemption 2: Ultimate Edition delivers all of the Story Mode content from the Special Edition plus additional content for online including Bonus Outfits for your online Character, Rank Bonuses, Black Chestnut Thoroughbred and free access to the Survivor Camp Theme.

Plus get free access to Additional Weapons in online.

Red Dead Redemption 2 for PC is the ultimate way to experience one of the most critically acclaimed games of all time, winner of over 175 Game of the Year Awards and recipient of over 250 perfect scores.

**The version on the MS store is for Xbox One only, not for PC**
PostTweetShare Share with WhatsApp Share with Messenger
Community Updates
Greenman Gaming DealsGreenman Gaming voucher
New Comment SubscribeSave for later
13 Comments
22nd Aug
Im sure this is the one I just got for my son for £32 off the Microsoft store.

Apologies if it's not and I've got it wrong
Edited by: "Captain_B" 22nd Aug
22nd Aug
Thanks. been waiting for a RDR2 deal for a while. this is not as cheap as I wanted but i got bored of waiting for PC prices to fall and pulled the trigger anyway...
22nd Aug

I just searched (as I would be a bit annoyed as I just purchased from green man) but I cant see it on wiindows store.
22nd Aug
Just checked with my son. It's definitely the Ultimate Edition down load he got and I only bought him £35 of credit.

Xbox one only by the looks of it
22nd Aug

[Image] Xbox one only by the looks of it

Agree - this is for xbone version. It needs to be in windows store for pc, which it’s not. It’s a bit cheaper on consoles as was out a year or so earlier
Edited by: "fryitup" 22nd Aug
22nd Aug
I still don't understand why the deal is being voted cold
23rd Aug

I still don't understand why the deal is being voted cold

It's a good price, pennies cheaper than cdkeys anyway. But people vote cold for their own reasons, don't take it personally.
23rd Aug

I think there are quite a lot of "sheep voters" who dont really know if its a good deal or not, but will follow the crowd and vote hot if its already hot, and cold if its cold, and never comment to explain their votes...
23rd Aug
Also, putting "PC version" in the title, may have stopped the hard of thinking voting cold because the XBone version is cheaper.
23rd Aug

I've changed it now but I feel the damage is already done!
3rd Sep
Yeah I'd consider this cold, I want to play this game but I could legit pick this up for a tenner on console why is it still so steap on pc?
Edited by: "skratchgonzo" 3rd Sep